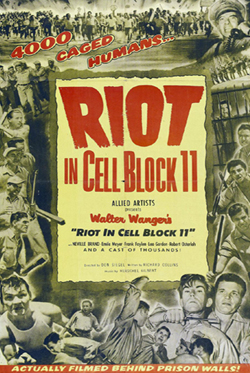 An intelligent, well-acted “message” melodrama hides behind that hard-nosed title. Directed by Don Siegel at his most primal, the film’s violence erupts in compelling contrast to the quiet intelligence of the screenplay by Richard Collins (My Gun is Quick). Its empathetic attitude is due in some part to veteran producer Walter Wanger whose recent stint in the slammer moved him to advocate for improved prison conditions. Starring Neville Brand as the firebrand who instigates the protests and, as “Crazy Mike Carnie”, real-life ex-con Leo Gordon, who Siegel described as “the scariest man I have ever met ” but went on to a long career as a dependable character actor. This was the beginning of Siegel’s longtime friendship with Sam Peckinpah who served as dialog director on this and several other Siegel films including Invasion of the Body Snatchers.