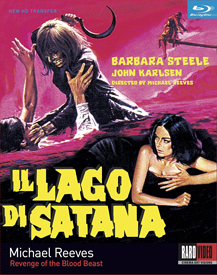 It’s back into the genre argument pits with the interesting director Michael Reeves. Reeves has persisted as a cult figure far longer than most directors with only three credited feature films. The movies are uneven but promising, and certainly the artistic equal (or better) than most of the work being turned out at the time by American-International and the majority of the Euro-horror crowd. The second half of the 1960s saw a general depression in the horror field, with Hammer losing touch with its audience and continental fare turning to sex content to generate interest. Reeves’ second film The Sorcerers is based on an intriguing science fiction concept, and his final picture Witchfinder General shifts its horror premise into the realm of legitimate historical fiction.

Eight years ago the Dark Sky label released a good widescreen DVD of Michael Reeves’ first directorial attempt The She-Beast, which like many Continental films of the time, took on different titles in different markets: La sorella di Satana, Il lago di Satana and the English release title Revenge of the Blood Beast. This new Rarovideo Blu-ray easily bests it in video quality, flattering the restored Cromoscope widescreen images. The movie has major limitations imposed by budget and commercial necessity, yet it’s an honorable production all the way. We can tell that the filmmaker has ambition.

The story shows a keen awareness of Eurohorror to date, and doesn’t try anything too original. It begins with the execution of a horribly ugly witch, two centuries ago in an Eastern European village. As in at least seven previous ’60s Eurohorror films, the witch puts a curse on her tormentors. We flash forward to recent times to join newlyweds Philip and Veronica (Ian Ogilvy and Barbara Steele) as they tour the area, now a Communist country with a depressed economy. They briefly meet the lecherous innkeeper Ladislav Groper (Mel Welles) and a local scientist, Count von Helsing (John Karlsen). A descendant of the famous vampire hunter, Von Helsing tries to interest the couple in his occult studies. After catching Groper peeping at them, Philip and Veronica leave. They crash their Volkswagen into a lake — the very same place where the witch was killed. When he comes to, Philip discovers that the body recovered from his car is not Veronica but a hideous creature, which returns to life and begins killing. Groper and a truck driver try to hide these facts from the humorless secret policemen, while Von Helsing convinces Philip that the monster-woman is really Veronica, possessed by the legendary witch.

That synopsis isn’t exactly ripe with possibilities, yet Revenge of the Blood Beast is an amusing and entertaining light horror offering. Reeves’ direction is very good; he makes the most of his widescreen format and overcomes many of the limitations of his budget. In many ways the no-frills production is comparable to one of Roger Corman’s impoverished runaway ‘Filmgroup’ movies made in Puerto Rico or Yugoslavia. Reeves had access to a few dirt roads, a tourist hotel that’s something of a glorified motel, and a water reservoir that can stand-in for a haunted lake. Yes, the movie plays out on a very small scale, but the script is nicely tailored to the resources available. 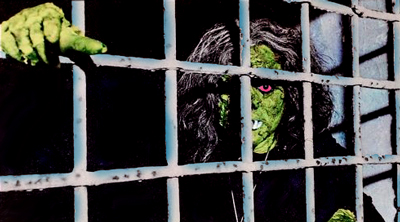 Star Barbara Steele was reportedly hired for a single day, which is made possible with a script that contrives for her character to appear only for a few scenes at the beginning and one at the end. One compliment for director Reeves is that even with the breakneck shooting schedule the newlyweds seem a real English couple, a horror version of Two for the Road. While not highly polished drama, the domestic scenes work more than well enough — Reeves knows how to stage normal dialogue and relationship interaction. Reeves’ acknowledged mentor was the action thriller specialist Don Siegel. Of Siegel’s films Blood Beast most resembles The Big Steal, a murderous Mexican road picture that nevertheless maintains a breezy screwball attitude.

Revenge of the Blood Beast has a broad tongue-in-cheek quality that at the time was quite original. It’s not a farce like the Corman-Poe comedies, but the newlyweds are well aware of Transylvanian lore as they deal with Count von Helsing’s claims that a real witch haunts the vicinity. Reeves’ best quality may be his visual eye, for despite the low budget context every shot looks good and is nicely composed. With Reeves’ judicious camera angles the witch-monster comes across much better on film than in stills; one scene where the dead-alive hag and an unconscious Philip occupy adjoining tables in Groper’s kitchen looks forward to Polanski’s The Fearless Vampire Killers. 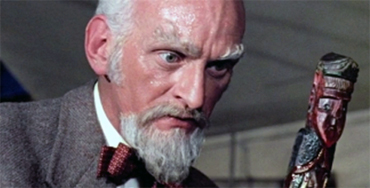 Previous reviews often mention the film’s secondary tangent, much broader comedy material involving bumbling secret police and lame chase footage. Although the film could do with less of this padding there’s not nearly as much as one might suspect. Besides, the gentle ribbing of the moronic “commie stooges” comes off rather well. Michael Reeves takes sole writing credit (under the name Michael Byron) but famed Roger Corman scribe Charles B. Griffith is reportedly responsible for much of the second-unit shoot. Frankly, we recognize Griffith’s sick hipster comedy vibe more in the sequences at the inn, especially those with Mel Welles, a leading comedy player in Griffith’s Little Shop of Horrors, and a director in his own right. Good angles and cutting in the car chase scenes help as well, although one telltale gag (presumed to be Griffith’s doing) doesn’t pan out. A black-clothed man on a red motor scooter keeps popping up throughout the final chase, like a ‘margin gag’ from an old Mad magazine. We wait patiently for the punch line (are the roads overrun with identical red scooters? Is the guy Dracula?), but one never surfaces. Was this Paul Maslansky’s apprenticeship for his Police Academy movies?

The silly throwaway gag everyone talks about is still there. When the maniac possessed-Veronica-witch discards the hand scythe with which she has slaughtered a victim, it falls across a mallet forming a familiar hammer-and-sickle Communist symbol.

The moody Ms. Steele couldn’t have been too upset working a 20-hour gig, because she seems perfectly happy playing her sexy scenes with Ian Ogilvy. Reeves stages a couple of gory moments but the movie overall is not particularly scary. We care for the distraught Philip and hope he escapes the Keystone Commissar Kops, avoids the angry Groper and gets his bride back.

Be aware that this reviewer tends to be impressed by low-budget productions that achieve a lot with very little, even if the level of artistic ambition isn’t the highest. Definitely a screwball horror thriller, Blood Beast has nothing whatsoever to be ashamed of. 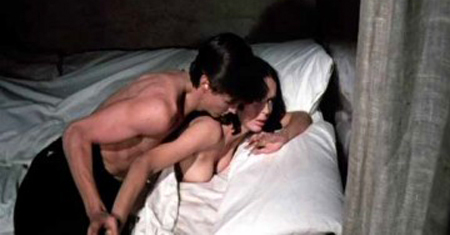 Rarovideo’s Blu-ray of Revenge of the Blood Beast is a fine encoding of this plain-wrap horror picture, in a good disc presentation. The added detail and contrast range helps with some of the photography. The witch’s horror-head mask shows more character in this transfer, where a broader range of dark tones is visible.

The film has two soundtracks. The original in Italian is provided with English subs, but the English track is preferred; the main players are English and are speaking English in what might be their own voices. Rarovideo’s packaging says the feature is B&W, but don’t worry, it’s in full color.

The one video extra, a featurette credited to ‘Nocturno’ is not a docu on the making of the film (as billed) but a half-hour Barbara Steele audio interview, where she rambles on quite pleasingly about her career, from art school to Rank contractee to her Flaming Star debacle in Hollywood, and from there to horror fame in Italy. That’s all fine and good, but the editing is amateurish at best. Film clips from the movie have been thrown in at random, and the rest of the long interview is wallpapered with an even more random selection of stills. When Ms. Steele is talking about costumes in Italy, we see several color shots from her Roger Corman picture in Hollywood. At least we have a clearly-recorded star to listen to. 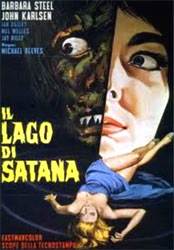 More informative yet still problematic are ‘Nocturno’s liner notes, which insist on elevating Michael Reeves to a directing pantheon, despite never having the chance to prove himself. The essay starts with the oft-repeated Reeves quote about making three good movies, when Reeves made one rather remarkable picture and two that ‘showed promise.’ Older articles on Reeves in Cinefantastique and Video Watchdog were more than balanced, but this essay wants us to accept him as a genius. As new writers exhaust the exotic corners of horror filmmaking looking for added meaning in the same limited information, more filmmakers will be granted unearned laurels as titans of cinema. I’m certainly willing to agree that Michael Reeves had what it took to be a great director, but his films were barely peeking out of the genre ghetto when he passed away. Filmmaking exploded into director-centric creativity in the 1970s, and we have no idea if he’d have blossomed into greatness. I’d rather appreciate what we have of his work – he was certainly improving with each picture.

Viewers with the old Dark Sky DVD will want to keep it, as it has a terrific, definitive audio commentary with Steele and disc producer David Gregory, plus Blood Beast producer Paul Maslansky and actor Ian Ogilvy. It’s everything we want in a commentary and nothing on this new disc can touch it.

David Gregory’s older commentary track was packed with Blood Beast revelations. Having previously helped out with Maslansky’s Castle of the Living Dead, Reeves showed up in Italy with a suitcase full of cash and a script for his own sure-fire horror movie. He and Maslansky quickly launched The She-Beast through their Italian connections. One of the few major props was a catapult from Sword ‘n’ Sandal films, repurposed to serve as a dunking device to drown witches. Barbara Steele must be reminded of most of the details of her one-day shoot from decades earlier but has fond memories of working with Reeves and Ogilvy. She laughs when told that she was tricked into a filming contract that interpreted ‘one day’ as a period of 24 hours.

This reminds me of another long-lost Dark Sky item that I wish could see the light of day: the company recorded a track for the great old horror opus The Flesh Eaters but lost out on the rights to produce to another company, MPI. I believe that author-interviewer Tom Weaver lined up one or two of the original filmmakers, including one who became a noted comic book writer… ? Anyway, that mystery track joins other OOP and unreleased tracks, such as some of the great commentaries from old Criterion laserdiscs.

I’ve put a note on my old The She-Beast disc not to toss it — I don’t want to lose that commentary. So my horror disc shelf will now have two copies of Revenge of the Blood Beast aka The She Beast.