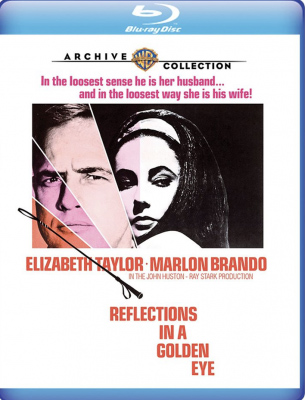 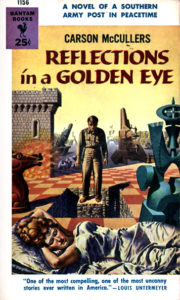 “There is a fort in the South where a few years ago a murder was committed.”

That’s an oddly detached way to begin a story that thrives on hysteria. It’s the prelude to Carson McCuller’s novel with an equally blasé title, Army Post. Inspired by the “alien” atmosphere of Fort Benning during the writer’s childhood, the book was first serialized over two issues of  Harper’s Bazaar in 1940. One can only imagine an unsuspecting fashionista browsing the latest styles and coming across this sordid tale of voyeurism, homosexuality and self-mutilation.

McCuller’s book was published the following year as Reflections in a Golden Eye – fifteen years later Burt Lancaster’s production company showed more than a passing interest, going so far as to announce Tennessee Williams as the screenwriter (how much Southern Gothic could one movie withstand?). It was the beginning of a slow journey through Hollywoodland with talent like Carol Reed, Keir Dullea, Francis Ford Coppola, and Richard Burton all hopping on and off the train at different stations. Finally John Huston, Elizabeth Taylor and Montgomery Clift sealed a deal with Warner Brothers with Chapman Mortimer and longtime Huston associate Gladys Hill assigned to the screenplay. Clift’s sudden death led to a hurried replacement, Marlon Brando, who joined the crew in Long Island, NY in September 1966 where filming commenced before moving on to studios in Rome. 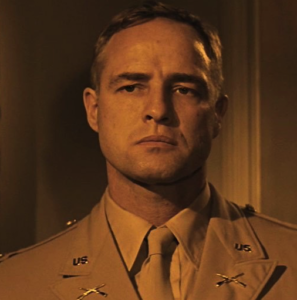 Set in 1948 at the beginning of the Cold War, Taylor plays Leonora Penderton and Brando is her husband Weldon, an army officer stationed in Georgia. It’s a small community but Leonora saw social advantages to the marriage and not much else; the unhappy major is a mightily repressed gay man and uninterested in satisfying his wife’s whims, sexual or otherwise. “Repressed” is too mild – he’s paralyzed – an intensely lonely prig who practices smiling in the mirror before attending a party. Leonora is his polar opposite, a bawdy sensualist who comes alive only when she’s riding her horse Firebird or her lover Morris Langdon, a Lieutenant Colonel with his own marital woes. Langdon is played by a superb Brian Keith who makes this conflicted gentleman the most sympathetic character in the film. 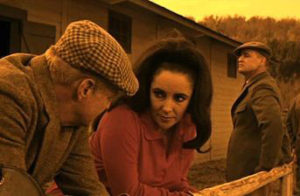 If the flighty Leonora is skin-deep in her understanding of life, Langdon is married to a woman too sensitive to endure it – the bedridden Alison, played by Julie Harris. Years earlier Alison gave birth to a deformed child and said goodbye to motherhood by cutting off her nipples – with garden shears, no less. Her symbiotic relationship with Anacleto, her outrageously effeminate manservant, is a further rebuke of her husband – Alison may be just another tortured soul but she is brilliant at mind games. 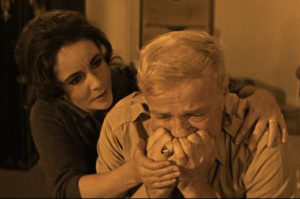 These are marriages manufactured in hell – Ellgee Williams, a mysterious private played by Robert Forster only stokes the flames. Williams spends his off hours lurking outside Leonora’s bedroom window when he’s not riding his own horse – in the nude. Once the Peeping Tom glimpses the major’s naked wife roaming the living room his casual prurience becomes an obsession – some nights he crouches by her bed to watch her sleep. Meanwhile Penderton himself has grown infatuated with the voyeur. 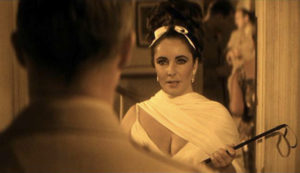 Taylor is quite good as the vinegary Southern belle – her brittle voice has the capacity to shatter glass but it adds an extra dimension of delirium to her clashes with Brando – in one scene she whips him with a riding crop, a metaphorical  punishment if ever there was. Taylor gets top billing but this is Brando’s film. It’s one of his most complex and subtle performances – Terence Rafferty compared it to another of the actor’s triumphs,  A Streetcar Named Desire. But Rafferty’s comparison of the unhappy Penderton was not to the brutish, uber-masculine Stanley Kowalski but the delusional shrinking violet Blanche Du Bois.

Brando comes up with a series of brilliant pantomimes that explain his character better than any dialog. His grunting, awkward workout session with barbells paints a vivid picture of his frustration and self-loathing while a grotesque scene that finds him pensively applying cold cream to his face is a vainglorious horror show. Rafferty notes that McCullers considered the book a comedy and the image of the pathetic career soldier patting his cheeks with lanolin does have its awful humor. But with Brando bringing the full force of his actor’s instincts to inhabit such a lost and desperate soul, we’re in the realm of tragedy, like it or not. 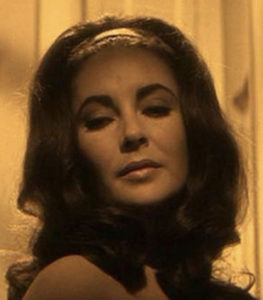 Huston’s film opens with the same quote about a murder in the south that began McCuller’s book. But in the film’s denouement, Huston upends that dispassionate description with what could be seen as a bravura moment of maverick filmmaking or an artist’s self-immolation. As gunshots ring out the camera careens wildly and repeatedly between Taylor’s screams and Brando’s agonized face before a slow fade to black. The use of violence to purge oneself suggests Travis Bickle’s rampage in Taxi Driver – both Penderton and Bickle have reached their boiling points. But in Scorsese’s film, the camerawork is measured as it tracks past the carnage, ending in a God’s-eye view of the abattoir. Slumped on a couch, numb to the horror, Travis is able to find some kind of momentary release. For Penderton, frustrated to the end, chaos reigns.

Warner Archives new Blu ray shines a light on one of the film’s great controversies with their beautiful new Blu ray release. Reflections in a Golden Eye was literally golden, a limited-color palette devised by Huston and his cinematographer Aldo Tonti. But the film was so off-putting to general audiences that the studio hurried out a full color version to the theaters. It didn’t help, Huston’s grand vision for McCullers book, almost in the same pantheon as his translations of Hammett’s The Maltese Falcon or Joyce’s The Dead, was consigned to the bottom half of double bills and soon forgotten. Warner’s set includes both versions on two separate discs – since Tonti (The Nights of Cabiria) was a great photographer, there are pleasures to be found in both. Extras are a fascinating half-hour of behind the scenes footage showing cast and crew at work and the original theatrical trailer.