What’s contemporary Europe got that we ain’t got? Powerful, serious filmmaking like that by Christian Petzold, starring the impressive Nina Hoss. Their sixth collaboration is a loaded narrative that takes some pretty wild narrative themes — plastic surgery, hidden identities — and spins them in a suspenseful new direction. 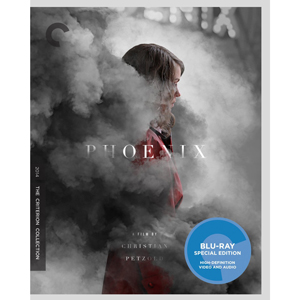 I had seen only one Christian Petzold feature before this one. 2012’s Barbara is an excellent Deutsche-Millennial thriller starring Barbara Hoss as an East German doctor trying to do the right thing in a touchy middle-ground between using her profession to help her fellows, and escaping an oppressive system. Hoss also starred with Philip Seymour Hoffmann in 2014’s A Most Wanted Man. Perhaps she’s too intelligent to make it big in American films right now, and it would be a shame to see her wasted in a Marvel comic movie. As it turns out, Ms. Hoss and director Petzold have made a half-dozen features together, each about a woman functioning under trying conditions.

Their latest is Phoenix, a fascinating multi-level story that at first seems to be made from parts of other movies. On the surface it’s a creepy melodrama with a full load of baggage — Nazi evil, plastic surgery, duplicitous relationships — everything except amnesia. The basic idea is so worn out as to require very special handling — someone returns from war in a way that their significant other cannot recognize them. The previous relationship is in question because the returnee is like someone back from the dead, or a Phoenix arisen from their own ashes. The story takes its ideas from a book that was made into a dour 1965 UA melodrama called Return from the Ashes, with Maximilian Schell, Samantha Eggar and ingrid Thulin. Petzold and his co-writer Haroun Farocki have added elements of plastic surgery and possible insanity. The result could have been as lachrymose as Irving Pichel’s old potboiler Tomorrow is Forever, a miscalculated romantic weepie in which hubby Orson Welles (!) returns ‘from the dead’ to see his wife Claudette Colbert, who doesn’t recognize him. The element of madness brings in elements from Teshigahara’s Face of Another (Tanin no kao) and Franju’s Eyes without a Face. Plastic surgery probably had its ultimate technical expression in Almodóvar’s The Skin I Live In, a show that stacks the gimmicks tall and wide, leaving little room for personal involvement. There are many examples of plastic surgery-themed crime films, but the goofiest ‘pure gimmick’ ones I like are Sekeley’s Hollow Triumph (The Scar) and Anthony Mann’s Strange Impersonation.

The good word about Phoenix is that its character-centric themes are so rich that the mechanical gimmicks fade into the background. It’s an absorbing story of a woman who needs to reconstruct her life and identity under grotesquely impossible conditions.

Lene Winter (Nina Kunzendorf) transports Auschwitz survivor Nelly Lenz (Nina Hoss) to a hospital where her severe facial injuries can be repaired. Nelly survived because the fleeing Nazis thought she was dead after they shot her in the face. With all of Nelly’s relatives gone, the doctors suggest a new face, to make a new start. But she wants to look like her old self: she was a popular cabaret singer. Lene helps with Nelly’s recovery. She makes plans for both of them to emigrate to Palestine right away, to restart both of their lives in the hoped-for new Israel. Healing but looking quite different from her original self, Nelly has a different agenda: she begins searching for her husband Johnny (Ronald Zehrfeld) in the shoddy nightclubs in the ruins of Berlin. Lene tries to dissuade her, hinting that Johnny, a gentile, may was likely the one to inform on her to the Gestapo. But Nelly clings to her previous life, convinced that Johnny still loves her… no matter what. He could have been forced to denounce her. In any case, love is not ruled by logic.

Phoenix is slow and deliberate. It concerns itself as much with intangible things as it does the creepy realities of postwar Berlin. Everyone is suspicious of everyone. Lene has taken Nelly’s future in hand (did I miss their exact relationship?) She speaks of retrieving the singer’s properties stolen by Nazis and other opportunists when the Jews were arrested.   [The movie doesn’t get deeper into this; I thought that such efforts were usually not legally successful, the same as with the recovery of stolen artworks, whose original ownership was never in doubt.]   We’re told only that Nelly is quite wealthy. Ignoring Lene’s entreaties to forget about Johnny, Nelly searches the dangerous night streets of Berlin, until she finds him doing odd jobs in a nightclub and living in a wrecked basement. 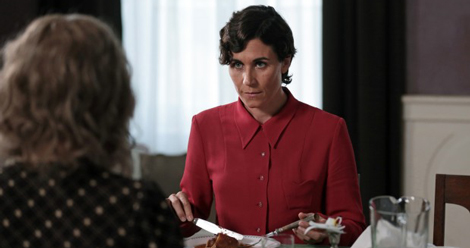 I’m only going to go one sentence more into the realm of Spoilers, so if you skip the next [two paragraphs] you can avoid my discussion of the movie that might ruin a virgin viewing. Johnny doesn’t recognize Nelly, but the first thing he tells the battered, haggard woman is that she resembles his dead wife enough that, if she impersonates her, they can claim her property and be rich.

[ In addition to its other genre baggage, Phoenix also becomes something like Alfred Hitchcock’s Vertigo. Johnny coaches the mystery woman to behave more like his wife … which is perversely exactly what Nelly wants. Lene claims that she’s in complete denial and doesn’t want to learn the truth about Johnny. For his part, Johnny has his eyes on the financial prize. He doesn’t add things up when this mystery woman can quickly write like his wife, seems to have the same taste in clothing, etc. As things head toward a showdown, we begin to dread the possibilities. All of the previous versions of this basic story end in gory violence, or suicide. Will Nelly be able to face the truth? To the credit of all involved, Phoenix steers away from the gimmicks and bloodshed, and concentrates on the characters. It’s slow but also profound.

I won’t say more about the romantic resolution but I can remark on the film’s potent political insights. Johnny is a realist if nothing else. When coaching Nelly about how to behave on her return from the East, he predicts how their friends will receive her, in detail. These are presumably the same people that abandoned her as soon as her Jewishness made associating difficult. Now when she comes back from the brink of death, the only survivor from her whole family, she finds a welcoming committee doing exactly what Johnny said they would, all apparently eager for life to go on as if nothing had happened. Nelly’s previous stigmatized behavior, walking in a cloud of disconnection, has now crystallized. We’ve shared her journey in a different way than do other movies that ask us to identify with a holocaust victim. Phoenix hasn’t been playing plastic surgery games as a genre exercise, or just to be clever, but to help us arrive at a new place of understanding. Phoenix is not as universally pleasing as the other Deutsche Millennial dramas I’ve enjoyed in the last fifteen years, but it has real integrity.]

Nina Hoss succeeds in conveying the horror of having one’s chewed-up face come back to life in a new shape, without dealing with the usual superficial concerns. I’m thinking of the slick but miserably outdated ’30s versions of the same plastic surgery melodrama, starring Ingrid Bergman and Joan Crawford. Nelly is haunted, all right, but in no way is she a standard victim. Perhaps that’s the difference… there’s no irreversible ‘doom’ element to this tale. Ronald Zehrfeld starred in Barbara as well. He reminds me very much of another actor I can’t identify. Again, Zehrfeld’s Johnny is not a typical victim, having been steered into his decisions by an ugly sequence of events. The Johnny character is a good parallel to our blacklist-friendly witnesses. It’s not just that they caved in to pressure, because most of us can see ourselves doing the same thing. It’s how they behaved afterward that reveals their true characters. Nina Kunzendorf’s Lene remains the mystery at the moment; I wouldn’t be surprised if a second viewing clears up my questions of her exact relationship to Nelly, and what she’s picturing as their future relationship. Does Lene’s third-act decision provide the jolt for Nelly to reassert her true identity?

The Criterion Collection’s Blu-ray of Phoenix is a fine encoding of this impressive production, directed with an evocative simplicity and photographed with great taste and finesse by Hans Fromm. Their vision of postwar Berlin achieves that more expensive productions fail to capture. They reproduce a sordid nightclub and the streets with various unsavory characters on the prowl. They don’t portray the ubiquitous American soldiers as villains. There is no fetishist emphasis on clinical gore; the few shots we see of the bandaged, battered Nelly do the trick on their own. Only one shot seems suggestive of an earlier film — in a darkened alley, Nelly moves forward from a shadow with just a trickle of light touching the side of her silhouetted face. It’s barely on screen for a second, but it looks like a cross between a shot in Eyes without a Face and a view of a possessed space man in Mario Bava’s Planet of the Vampires — it’s something about her pose. It was just an impression — the shot might not strike me the same way when I next see the movie.

The extras by Criterion’s disc producer Elizabeth Pauker cover all bases, with the director and his very special actress speaking in detail about the nuances of their film. We learn more about the seemingly ideal working relationship on these German films from more cast and crewmembers in a new making-of piece. Cinematographer Hans Fromm also has a fresh outlook, and compares his work in recreating postwar Berlin with that in Germany Year Zero and The Murderers are Among Us. He says that renting film cameras is so cheap now, and the film is still available, that the choice to shoot on film was not a problem. The resulting movie is the closest look yet at Petzold and Hoss’s fine collaboration.

I’ve enjoyed Michael Koresky’s liner notes on many Eclipse releases; his insert essay for Phoenix is written with his usual precision and insightfulness. The interesting cover image must have been an alternate for the film’s marketing plan, as I don’t remember anything like it in the movie.