Robert Siodmak’s first film noir is a visually expressive masterpiece in the lush romantic tradition that imposes a dreamlike mood on a nightmarish story.  Ella Raines goes to extreme lengths to break the conspiracy that’s sending her boss to Death Row, aided by the Kafka-like indifference of modern Manhattanites. Franchot Tone is the man with the weird hands, but Woody Bredell’s chiaroscuro cinematography is what puts this proto-feminist tale in the top tier. 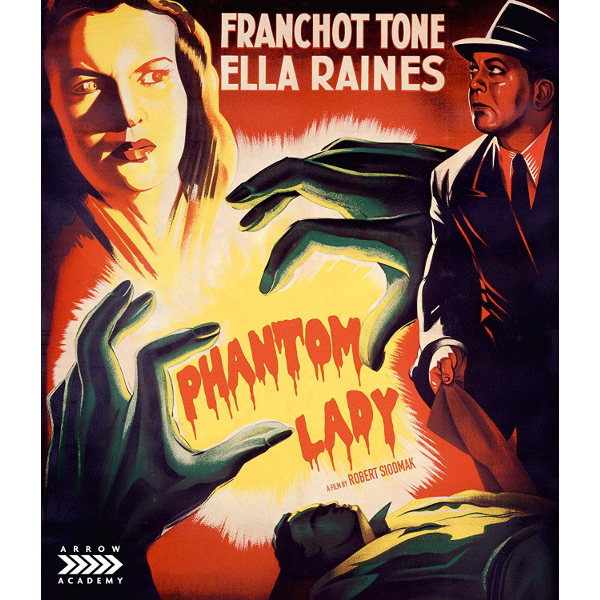 1944’s Phantom Lady was a career triumph for director Robert Siodmak, who had fled his native Germany long after his confreres Billy Wilder and Fred Zinnemann. Wilder scraped around Hollywood trying to get work as a writer, and Zinnemann drifted into short subjects and helped make a pro-Union film in Mexico. More established in Germany than either of them, Siodmak was for a while hired by Fox and Universal only as a utility director. But even when given an assignment like Son of Dracula, critics and studio bosses admired his work.

Robert had made more than one noir-like show back in Germany, notably Der Mann, der seinen Mörder sucht, a story about a suicidal man who hires an assassin to kill him, and then tries to cancel the deal. A young Billy Wilder shared a writing credit on that thriller, along with Robert’s competitive brother Curt Siodmak. Working at Universal at the same time, Curt wrote the original story for Son of Dracula but had become typed for oddball sci-fi and horror pictures.

Siodmak’s good work caught the attention of the talented Joan Harrison, who had just been given a producership at Universal. The former Hitchcock collaborator had writing credits on Jamaica Inn, Rebecca, Foreign Correspondent, Suspicion and Saboteur; Hitchcock promoted her enthusiastically and later employed her as a producer for his TV shows. Harrison would surely have enjoyed a more impressive career, if Hollywood wasn’t so biased against woman producers; as it was, in just a few years she generated five interesting films noir. To write Phantom Lady Ms. Harrison chose playwright Bernard C. Schoenfeld to adapt a Cornell Woolrich story. What could have been a bad Hitchcock imitation turns to gold thanks to Siodmak’s interesting direction and the resourceful, atmospheric cinematography of cameraman Woody Bredell.

Cornell Woolrich’s story is sensitive to the new status of American women in wartime. The leading character is an independent woman who acts on her own. Architect Scott Henderson (Alan Curtis) argues with his wife and spends the evening with a mysterious woman who refuses to identify herself. When he returns he finds his apartment full of policemen: his wife has been murdered and he cannot provide an alibi. He also cannot produce a witness: neither a bartender (Andrew Tombes), the entertainer Estela Monteiro (Aurora Miranda) nor the orchestra drummer Cliff (Elisha Cook, Jr.) will corroborate Scott’s story, and after a trial marred by a weak defense, Scott is soon in prison awaiting execution. That’s when Henderson’s secretary Carol Richman (Ella Raines) steps in. Advised by Scott’s best friend Jack Marlow (Franchot Tone), Carol tries to find out why the witnesses wouldn’t help her employer. The detective on the case Inspector Burgess (Thomas Gomez) warns Carol against playing amateur sleuth, and Scott’s pessimistic attitude doesn’t help either. But then it becomes apparent that someone has been spreading bribe money around, and Inspector Burgess begins to coach Carol in her quest for evidence.

Phantom Lady is only so-so as a mystery; most viewers paying attention will deduce the killer long before the film reveals it. But whodunnit issues are entirely beside the point in an emotionally satisfying movie constructed of nearly perfect, atmospheric scenes. As in any good picture, good storytelling and compelling characters make unlikely events seem plausible. Scott meets his ‘phantom lady’ in a bar and makes an incognito date, with no names exchanged. They go to a show together, which leads to an amusing scene where the Brazilian singer-dancer becomes annoyed that ‘the phantom lady’ is wearing a custom hat identical to her own. It’s no coincidence that Monteiro’s act reminds us of the great Carmen Miranda, at the time enjoying big success over at 20th-Fox — Aurora Miranda was Carmen’s lesser-known sister. Although the film has no officially composed music score, music figures strongly in Siodmak’s most impressive scenes. Scott’s mystery date also attracted the attention of Elisha Cook’s playboy drummer, Cliff, so Carol goes undercover as a jazz fan, and picks up Cliff in the hope that she can get the truth from him. The private midnight jam session she attends got a lot of industry attention. Siodmak stages the scene as a series of tense close-ups fixating on Carol’s hep-cat excitement and Cliff’s growing arousal as he beats his drums. The crazy angles and the sweaty, leering Cliff communicate the tawdry sex charge directly to the viewer. Siodmak wouldn’t equal the hypnotic effect until four years later, when he paired Yvonne de Carlo and Tony Curtis for a nightclub rumba scene for his Criss Cross. For raw energy, nothing touches the jam session. Who would have thought that the perennial loser Elisha Cook could ever be convincing as a sex-crazed musician and ladies’ man?

Elsewhere Siodmak and Bredell collaborate to create moody scenes with low-key lighting, building on the ‘big-city haunted mood’ established by producer Val Lewton over at RKO. Carol confers with the condemned Scott in a dark prison room that, transformed by lighting into an extreme silhouette, becomes a distorted expressionist setting. Night transforms ordinary settings: a lonely elevated rail station becomes as threatening as a haunted house. All of this is filmed with unerring precision. Siodmak and Bredell make excellent use of Universal’s optical department; a moody 2 a.m. view of an elevated train platform is almost entirely a matte painting. The framing of Siodmak’s trucking shots were so tight in a shot of Ella Raines walking behind Andrew Tombes’ bartender, that to keep her at the right distance they’re tied together with a thread. Perhaps Raines mis-timed a few takes, prompting Bredell to suggest the solution?

What makes Phantom Lady noir is the unhappy, unhinged underworld uncovered by Carol’s investigation. Caught up in their personal problems, people suffer from depression and psychosis, and are disillusioned, disconnected and uncaring of others. A vain performer places her self-image over Scott Henderson’s life. Otherwise decent citizens are easily bribed to condemn an innocent man. Only Carol’s refusal to give up stands in the way of Scott’s execution.

First-billed Franchot Tone shows up only for the second half of the show, but we’re made aware of his status as a maniac killer almost as soon as we see him. Hollywood was just beginning to embrace the notion of real-life killers that act on bizarre psychological impulses, instead of the usual motives of greed, jealousy or hatred. Again channeling producer Val Lewton (who Hitchcock socialized with and admired), Franchot Tone’s Jack Marlow resembles the maniac sea captain in Lewton’s The Ghost Ship. The madman is fully aware that he’s a serial killer, but can’t do anything about his murderous impulses. Phantom Lady’s strangler is perhaps a little flamboyant, but he compensates with murderous details of the kind that would become de rigueur in Italian giallo films 25 years later — obsessed with his own hands, Marlow kills in a very specific way, when in a strange trance.

Surely affected by the realities of war, violence in wartime films increased quite a bit, and became more realistic. Thus Phantom Lady gets away with things that the Production Code would earlier have suppressed. Average films before WW2 wouldn’t be allowed to show a clutch of policemen behaving like thugs, psychologically torturing Cliff in such a cynical manner. Other characters seem to be sexually maladjusted. Carol’s tawdry date with Cliff suggests a quick pickup for sex. Nobody seems committed to the social good, or even the truth. And a monster like Jack Marlow can work his evil without being detected; only through concerted effort and at great risk can anything be done about him. This really is a feminist picture. The fearless self-starter Carol Richman seems twice the person that Scott Henderson is, so much so that the conventional finish makes us wish she’d figure out something better to do than just become ‘Scott’s girl.’ Even during the war, the ultimate goal of independent women seems to be to find the right man to serve. The same thing happens with Nina Foch’s strong heroine in My Name is Julia Ross. On her very next picture Joan Harrison would try to take a detour away from conventional characters and storytelling, with the weird, twisted The Strange Affair of Uncle Harry. It didn’t fly with Universal, which made her opt for a conventionally acceptable, dramatically bogus Code-approved finish. She was so angry that she broke with the studio, and for her next two pictures shifted over to RKO.

We may get more revelations about the producing career of Joan Harrison. Her 1947 film noir They Won’t Believe Me was cut by a full fifteen minutes for reissue, which perhaps accounts for a somewhat confusing continuity. The studio that controls RKO’s library is working to bring some of its pictures back up to their original running times, so maybe we’ll get lucky with They Won’t Believe Me. Arrow Academy’s Blu-ray of Phantom Lady is a sharp transfer of this classic and influential noir, and one of the best adaptations of Cornell Woolrich. The rich image shows little damage and carries the glossy sheen of original prints; the audio really jumps during the musical show and the jazz jam session.

Arrow’s extra for this release is a 2008 hour-long Cinefile docu show on the Noir mystique in general, produced by Paul Joyce. They’ve pulled in a tall stack of usual-suspect critics plus some actors and directors of latter-day neo-noir shows. It follows the pattern of Warners’ earlier DVD featurettes that arrange many short bites from qualified spokespeople in such a way that nobody gets to develop a complete idea — docu-impressionism? By the standard of our video companies it’s almost overproduced. They actually license film clips from various sources. The music and editing are flashy, too.

The release of Phantom Lady preceded by almost six months the watershed noir Double Indemnity, the movie that really busted the Production Code wide open. Billy Wilder’s film made romantic leading players into cold-blooded killers for the first time. Phantom Lady is still part of the expressionist, romantic tradition — it’s an ugly world, but our protagonists are unequivocally virtuous.