A pure-gold Savant favorite, Sir Richard Attenborough’s first feature as director is a stylized pacifist epic of the insane tragedy of WW1, told through contemporary songs, with alternate, irreverent lyrics given them by the soldiers themselves. And one will not want to miss a young Maggie Smith’s music hall performance — luring young conscripts to doom in the trenches. It’s the strangest pacifist film ever, done in high style. 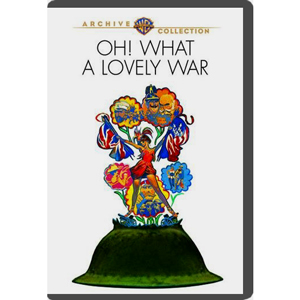 What can one say about a highly original movie that was ignored in its day, but now seems more relevant than ever?  A biting lampoon at the awful, insane politics of World War One cuts even more deeply, considering the awful, insane politics of our undeclared, uninterrupted warfare of today. Richard Attenborough’s Oh! What a Lovely War garnered great reviews but was rejected by both the public and Paramount, which showed its lack of confidence with the same kinds of bookings it gave to Sergio Leone’s Once Upon a Time in the West … practically none. I happened to catch it only because it played at a theater on an Air Force base, a venue that gave every release equal emphasis. The gargantuan musical is a pacifist labor of love, a clever transposition of a Music Hall revue into cinematic terms. Charles Chilton’s radio original shared a brilliant idea with Joan Littlewood’s stage adaptation: the popular songs associated with WWI were sung with the lyrics made up by the soldiers themselves. In many cases the songs are actually improved by the irony and sarcasm. Jerome Kern’s haunting melody They Wouldn’t Believe Me is given the following lyric line:

Oh! What a Lovely War encompasses at least thirty songs like this, all of them full of life and wit and heartbreak. The film adaptation by novelist Len Deighton (The Ipcress File, Funeral in Berlin, Billion Dollar Brain) comes up with a brilliant and fitting stylization to tie the tunes together:  World War I is conceived as an Amusement Pier at Brighton, a get-dressed-up, flag-waving patriotic carnival. The entire story of the War to End All Wars is compressed into a heavily stylized pageant.

Oh! What a Lovely War’s principal weapon is heavy-duty irony. The farce of homefront euphoria contrasts obscenely with life and death in the trenches, and a constant flow of maimed young men returning to the pier from across the sea. The movie was Richard Attenborough’s first job of direction; fittingly, his breakthrough acting role had been as a murderous hoodlum on a fun-fair pier in a 1947 movie called Brighton Rock. 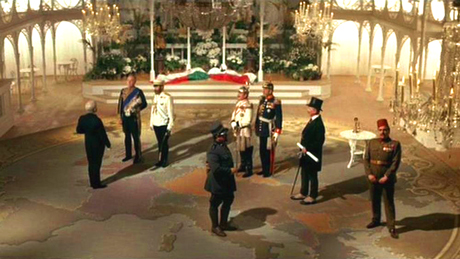 With the assassination of the Archduke of Serbia, a tangle of aristocratic alliances fumbles its way through deceit and diplomatic ineptitude to throw all of Europe into conflict. In England, a rousing patriotic campaign assures widespread enlistment and optimism for a quick victory over the Huns. All the conscription-age males in the Smith Family are swept up in the glory, which sours into a nightmare once they reach the killing trenches in France. An aloof and incompetent aristocratic military pointlessly throws thousands of men before machine guns on a daily basis — for weeks, months, years.

Oh! What a Lovely War is a lot of things. It’s a snapshot of a relatively innocent England about to be disillusioned by the horrors of war. It’s a record of the way things were — styles, class attitudes and music. And every brightly lit image is a scream of protest against the unfathomable waste and destruction.

The movie is a surrealist musical fantasia. At the end of the fairly realistic pier is a dance palace where the aristocracy and military high command carry on their full-dress charade, a petty competition for status and promotions. One by one the Smith men slip into uniform and march (or take fun-ride cars) to the end of the pier, where they disappear into another dimension, to be magically transported to the front. A simple cut takes us from the light frivolity back to reality, where a forlorn Mrs. Smith gives the empty horizon one last look. 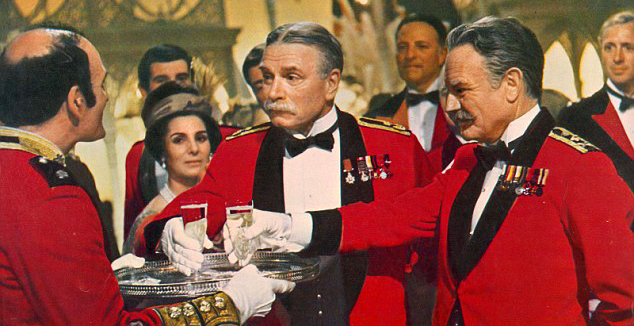 These supernatural transitions are main cinematic device. On a tower high above the pier arcades, the incompetent Field Marshal Sir Douglas Haig (John Mills) peers at the French coast through a spyglass. In the vast ballroom below is a scoreboard with the name of a battlefield followed by the obscene daily tallies: “60,000 soldiers killed today. Yards Gained, Zero.”

The movie begins with a weird stylized pageant. The assembled crowned heads and prime ministers of Europe stand on a giant chessboard-like map. Their words are all historic quotes; every country assures its neighbor of peaceful intentions while preparing for hostilities. A recurring emcee-like character (Joe Melia) produces a pair of red flowers for the Archduke and his wife to hold. Poof goes the photographer’s flash, and they’re dead. Senile Emperor Franz Josef is tricked into signing a declaration of war. The high nobility assure each other that the hostilities to come will in no way harm their continued personal affections.

Censorship in England is different in some ways than it is here. Although Attenborough used only direct quotes for the dialogue spoken by the high officers, the family of Field Marshal Sir John French tried to get the film banned. Even though he was on firm legal ground, Attenborough had to tread lightly when speaking on the subject. After reading unbelievably appalling newer accounts of the behavior of the English officer corps in ‘The Great War,’ we admire Attenborough’s self control. One’s initial reaction is that the English generals and politicians should have been taken out and shot, wholesale.

The Smith family (played by Wendy Alnutt, Colin Farrell, Malcolm McFee, John Rae, Corin Redgrave, Maurice Roëves, Paul Shelley, Kim Smith, Angela Thorne and Mary Wimbush) form the ensemble backbone of the story. We must watch as the family is decimated by its own patriotic good will. Silenced by the overwhelming peer pressure, the Smith women have no recourse as their sons, husbands and sweethearts are lured on stage by Maggie Smith’s teasing enlistment song, and immediately converted into soldiers. Meanwhile, the ancient, doddering high commanders use the troops as cannon fodder, while grousing about petty personal inconveniences. “We need only one more big offensive and the enemy will collapse,” the generals keep repeating … the 1915 version of ‘Peace with honor,’ and ‘Stay the course.’

Jean-Pierre Cassel’s jaunty French song depicts the destruction of fancy 19th century style cavalry in the new mechanized warfare. Most of the other songs express the misery and dreams of the soldiers at the front. Some sound familiar and others are converted hymns or pop songs given a macabre twist: Hush! Here comes a whiz-bang … and it’s headed straight for you!” An obscene drinking song or two are thrown in for good measure. A group of Australians sings One Staff Officer Jumped Right Over Another Staff Officer’s Back, lampooning the pompous officer corps that stays a safe distance from the front. At the opposite emotional pole, Silent Night sung in German is used for the historical Christmas Miracle, a true occurrence in which soldiers from both sides left their trenches for a few hours to fraternize in no man’s land… until the high command threatened them with execution for treason.

Many of the songs and situations are funny but Oh! What a Lovely War has a definite serious intent, especially when we realize how few of the Smith boys are coming home, from the young pups to the stuffy cousin Bert who became an officer. The film’s symbolic code uses red flowers as markers for death, and Attenborough finds heartbreaking ways to reveal them, making beautiful use of the era’s shallow focus / rack focus photographic style. Late in the film Vanessa Redgrave appears as a radical anti-war speechmaker. Her harangue against war profiteering and a government that doesn’t care about killing an entire generation of men is angrily shouted down. The average citizen is desperate to believe that their husbands and sons are being well taken care of and are fighting for something meaningful. Meanwhile, the Field Marshall prays that the war will be over before the Americans get involved. Think of the face he’ll lose.

I wish that Oh! What a Lovely War appealed to everyone as much as it does me. How many movies are there that condemn patriotism, especially in such macabre terms? It’s definitely a wild concept, to utilize a group of catchy songs to support a subject most people will consider ancient history. But the issues depicted are still with us, with a vengeance. The film’s rewards are great: it is emotionally wrenching when a devout hymn is suddenly hijacked by a beautiful tenor voice: “When this lousy war is o-ver, no more soldiering for me …” Yes, the movie is both abstract and long. Two hours and 25 minutes is a lot to sit through; Attenborough’s technique is inspired but the pace is on the slow side. I can easily imagine Paramount being scared off by preview walkouts. I also wouldn’t want to see a single thing cut out.

There’s nothing more chilling than the film’s final reel. The last soldier to die disappears behind the blur of a red flower. He emerges from a mist to follow a red ribbon leading from the trenches, through no-man’s land, to the ballroom where the treaty is being signed. Across matched dissolves, he finally runs in his shirtsleeves and bare feet on green grass, to sit down among a few of his friends, in a sunny place where he can relax. The Smith women are having a picnic a few yards away. His mother seems to sense his nearness.

The last shot is a jaw dropper on a big Panavision screen, and will still be on any sizeable monitor. The soldiers are replaced by white crosses. The camera pulls back to show the Smith women in their white Sunday dresses moving between the ranks of white grave markers. The camera keeps pulling back until the screen is filled with literally thousands of crosses that become white dots. The women are also reduced to moving white dots moving through the pattern. It isn’t CGI. The image is a humbling expression of the numbing reality of millions of wasted lives.

The Warner Archive Collection DVD-R of Oh! What a Lovely War is essentially a re-issue of a Paramount disc from 2006. Although the glorious wide shots would surely benefit from an HD presentation, the enhanced transfer is colorful and attractive at all times, matching what I saw back in 1969. English subtitles make it possible to understand all the lyrics in the strong mono track, a distinct advantage over the theatrical experience. I must have played the soundtrack LP 500 times, and still didn’t figure out all the words until seeing this disc.

Sir Richard Attenborough offers a long and slow commentary but comes off effectively in a three-part making-of docu. It’s really a set of interviews with surviving cast members and a few crew people. Some of the reminiscences are interesting and others rather shallow, and the piece holds up well until the end, when the participants belatedly offer their personal anti-war sentiments. Since the film is already the ultimate statement on that theme, their comments are rather superfluous.

I’m glad that the WAC is able to reissue Oh! What a Lovely War, a truly worthy title. It and the Michael Caine movies Alfie and The Italian Job are the Paramount features from this group that I’d most like to see on Blu-ray.