Anticipating new interest in one of the most influential horror films of all time, Criterion gives George Romero’s zombie classic the boost to 4K. Pittsburghs’ most famous movie production returns American horror to its down-home roots, with excellent docu-drama direction and enthusiastic performances. It’s like a Disney film: every seven years a new generation will arrive to debate whether the besieged victims should have fought upstairs, or all retreated to the basement. It’s a 3-disc set, one 4K UHD and two Blu-rays. Where’s the Bill ‘Chilly Billy’ Cardille theme song? 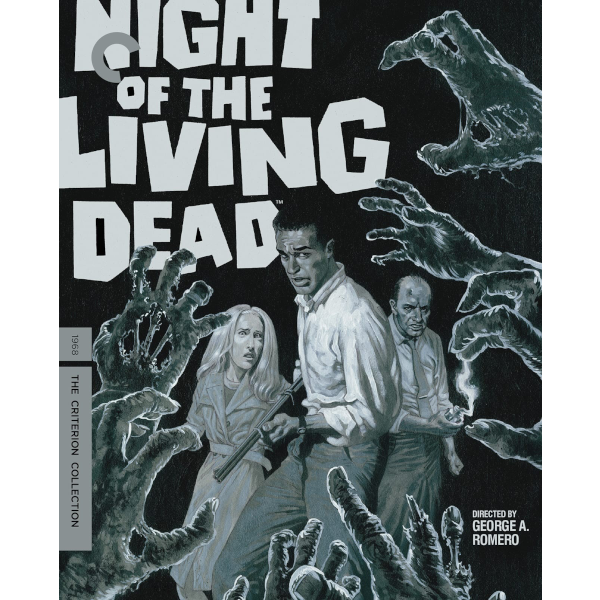 Talk about Zombies We’ve Known and Loved — the taut thriller Night of the Living Dead still pays off in real chills. Independent filmmaker George Romero may have come from the world of industrial filmmaking and local TV commercials, but it’s clear that he was born to make this show. The filmmaking is top rank.

This is of course one of the most famous horror films ever made, but if not for a couple of odd developments it might have remained a tasty obscurity, like Herk Harvey’s similar filmed-in-the-boondocks gem Carnival of Souls. The newly-minted Chicago film reviewer Roger Ebert caught a 1968 matinee and noted unaccompanied small children in the theater, crying in fear. Ebert wrote a special article on the use of movie theaters as a cheap babysitter, and urged exhibitors to use more discretion. 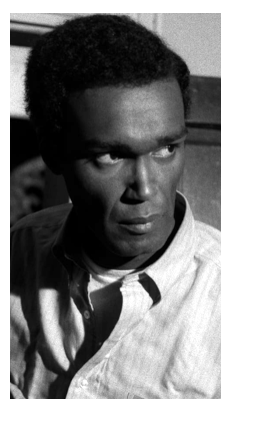 The article was reprinted more than once in The Reader’s Digest and thus was read by half the homes in the nation. At age sixteen, I read that article too. I don’t remember being all that concerned for the children of America but I definitely wondered just how horrifying this Night of the Living Dead movie could possibly be.

If You Film It, They Will Steal it From You.

An initial 1968 release through Walter Reade didn’t set the world on fire. But then someone noticed that theatrical prints bore no copyright notice, and film pirates smelled Public Domain blood in the water. Romero’s picture was soon showing everywhere, particularly around college campuses. I was present at a 1970 midnight screening in Westwood. We had responded to crude mimeographed handouts distributed around UCLA: Midnight Horror Show, Plaza Theater, One Dollar. NOTLD was preceded by rumors of taboo content but it won us over through George Romero’s sheer directorial skill. It’s one of the few instances when we felt the grip of fear seizing an entire audience: we were trapped in a house under attack by an army of ghouls, without a chance of escape.

It became one of the first Cult Midnight Movies, yet the copyright mistake elbowed George Romero’s creative filmmakers out of the profit stream, a ripoff that continued right through the 1970s. Sherman Torgan of Los Angeles’ New Beverly Cinema stored a good 16mm print in the corner of his projection booth. If he could line up no suitable attraction for a Friday and Saturday midnight slot, Night always drew a respectable audience.

What, you have no idea what Night of the Living Dead is about?   In a rural cemetery, Barbra and her brother (Judith O’Dea & Russell Streiner) are attacked by a stumbling madman. Struck speechless, Barbra escapes and takes refuge in a farmhouse. She is soon joined by Ben (Duane Jones), who realizes that she’s in psychic shock. Ben barricades the house in anticipation of more shuffling killers. The radio and TV dispense confused reports about dead people becoming reanimated cannibals.

“The recently dead are coming back to life and eating the flesh of the living.”

Ben discovers that several equally frightened refugees are already hiding below in the cellar. Argumentative Harry Cooper (Karl Hardman) clashes with Ben on the issue of leadership and strategy: Cooper wants to hole up in the cellar and Ben wants to fight it out upstairs. Harry’s wife Helen (Marilyn Eastman) is concerned about their daughter Karen (Kyra Schon), who has been bitten by a ghoul and is not doing well. Young Tom and Judy (Keith Wayne & Judith Ridley) decide to make a dash for the truck in the farmyard. Alas and alack, the group disunity inside is as problematic as the zombie threat outside.

Free from the edicts of studio filmmaking, Romero made something not seen before. Night of the Living Dead is in no way an amateur production. The settings, makeup and effects are excellent. The lighting is professional and often extremely expressive. Romero cleverly limits our perspective to what the human defenders personally experience. Nervous radio and TV news reports make the crisis seem immediate and authentic. The media’s sketchy facts remind us of real disasters, when reliable information is scarce. Romero transfers all of this tension directly to the viewer.

Do you ever try to recall the exact feeling of seeing an unforgettable movie for the first time, with an audience that had also never seen it before: King Kong, Psycho, Star Wars? That Night of the Living Dead screening made a similar ‘virgin’ impression. The midnight audience in 1970 seized on any excuse to relieve the tension, laughing at klunker dialogue, weak performances. But our defenses fell away when the movie followed through on its gruesome premise. The hungry ghouls break through by the dozens, feasting on human flesh. The beseiged holdouts’ admirable courage and optimism largely come to nothing.

The tension never subsides. Romero’s slow-walking ADD ghouls are genuinely disturbing. Brief close-ups give us glimpses of post-mortuary wounds; longer shots show shambling figures drawn to the house’s tasty human contents. In one of many moments that elicited gasps, a pan from a couple of isolated walking cadavers reveals two-score more converging on the house. An ‘incident’ is going to become a siege. 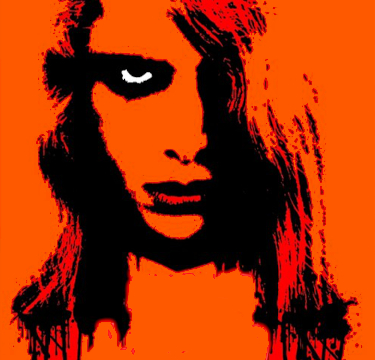 For the Ghoul Feast in the farmhouse yard, a different film stock obtains a grainy, high contrast texture. A low, rumbling electronic audio tone adds another level of psychological discomfort. Several scenes also make use of abstracted sound effects. The repeated stabbing of Helen is accompanied by stylized shrieks reminiscent of the grating violin strokes in Psycho: it’s as if the sharp trowel weapon is laughing at her. Most of the show is tracked with expertly edited stock music that elevates our sense of chaos. The cues are vaguely familiar, which also adds to our distress — many are the generic soundtracks from old TV shows.

Night of the Living Dead’s cultural analysis began almost immediately. Is it an allegory for an America under outside threat and weakened by discord from within?  Is it a critique of race issues?  What’s the significance of little sick Karen Cooper, who makes her own mother a victim of Mother Love?  It’s like a preview of Charles Manson’s Helter Skelter: “Your children will come after you with knives.”

The finale is a bleak but artful montage of grainy still photos, over continued audio of the zombie hunt. The grim vigilante backlash is all guns, dead bodies, and meat hooks. The final shot returns to live-action to show a stack of corpses being lit aflame. No emotional release that a ‘the end’ card might bring, just an image of devastation, obliteration.

Night of the Living Dead isn’t going to die; its graphic horrors are just as effective now as when it made midnight audiences scream in unison back in my college days. It’s a great memory, waiting in line in a chilling wind with Randall William Cook and other denizens of the UCLA dorms. 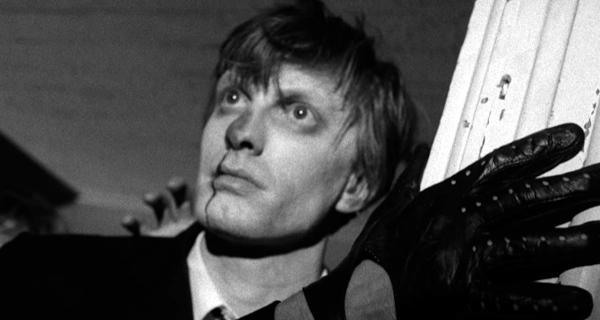 The Criterion Collection’s 4K Ultra HD + Blu-ray of Night of the Living Dead is likely from the same 4K digital restoration released on Blu-ray in 2018. The scan was reportedly taken from the film’s 35mm film negative. The show now sports a copyright tag identifying the original Image Ten group, which hopefully means that the producers or their heirs have legally recovered George Romero’s labor of love.

I do see a significant picture improvement in the 4K edition on my setup, and the well-mixed original audio never sounded better. Higher-end home theater aficionados will surely reap a screening experience superior to anything seen in 1968.

The new disc set has a 4K feature on one disc, and then a pair of Blu-rays that for content and menus seem identical to the 2018 Blu-ray release. They aren’t literally old product; all labels carry a 2022 date. The disturbing electronic tone still plays behind the disc menus, serving notice that serious horror content is present. 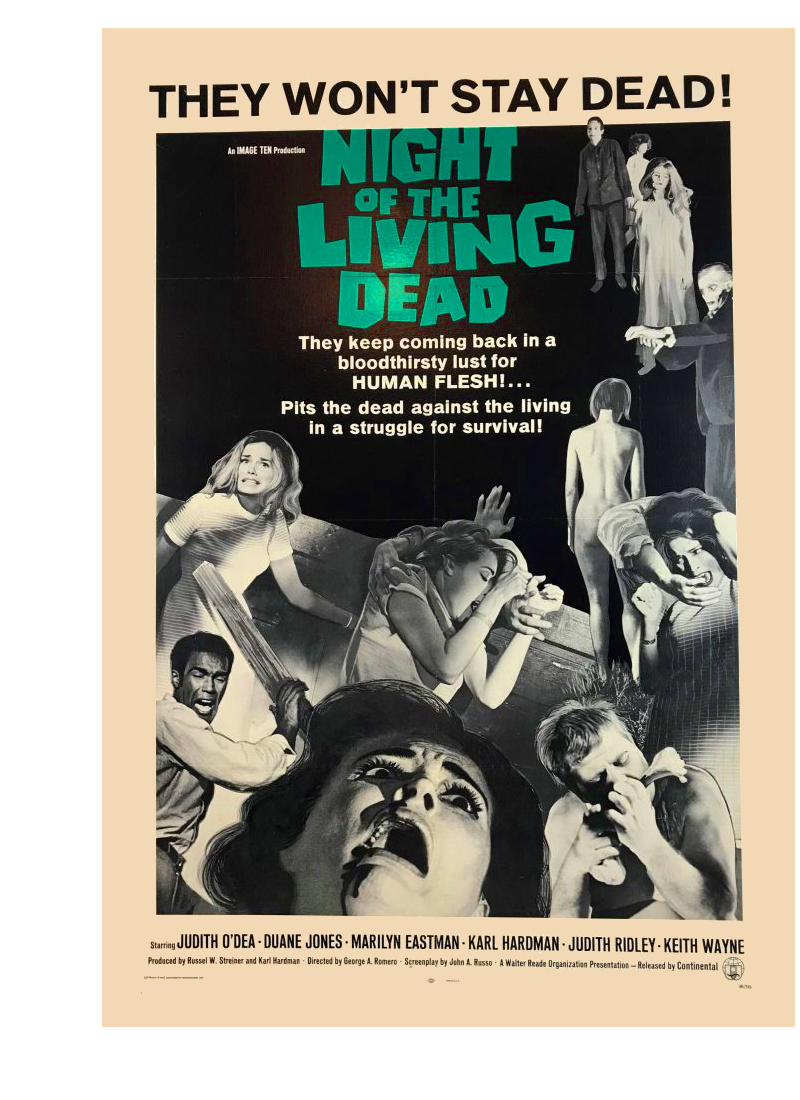 It was too much to hope that this newest iteration of Night of the Living Dead would be presented in an original 35mm theatrical widescreen aspect ratio. I suppose the aspect ratio was dictated by the film’s owners. It’s instead full-frame open matte, showing all the title blocks centered for widescreen matting. A camera flag peeks in almost immediately, on the lower left; it would be unseen in a proper theatrical presentation. Viewers with equipment that allows them to reframe content might try matting to 1:66 or 1:85 — doing so adds to the film’s sense of claustrophobia. Of course, the show still plays fine full frame.

Criterion repeats exactly the extras of the 2018 release produced by Curtis Tsui, on that second Blu-ray disc. A longish featurette gives us the wit and wisdom of filmmakers Frank Darabont, Robert Rodriguez and the always-entertaining Guillermo Del Toro. A pair of audio commentaries from 1994 include most of the key creatives on the picture, and we remember well the excellent audio-only piece with Duane Jones.

Slates on the dailies reel give the film’s working title as FLESH-EATERS, which makes us think of Jack Curtis’s The Flesh Eaters from 1964. We’re also given a raw transfer of a work print of a version of the film with a handsome title optical reading ‘Night of Anubis’. Were those meant to be Egyptian radiations from space that re-animate the dead?

Also identical to the first release, the new keep case includes a folded poster of Kyra Schon, on the back of a sober essay from critic Stuart Klawans.