This early John Wayne oater displays the natural star quality and winning personality that sustained him through the 1930s — it’s a naïve, charming western that features some of The Duke’s closest early associates. 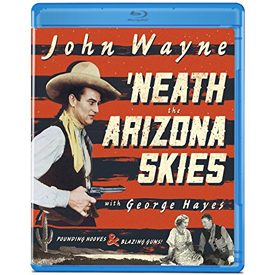 Want to see where our western film heritage really came from? Big studios made giant wagon train movies, epics about the railroad and star-driven biographies of Billy the Kid, but the genre was sustained by a steady diet of six reel ‘oaters,’ B-movies that featured special western stars (and sometimes their star horses) and played every week to the kiddies, sometimes in special theaters. Barely an hour long, they always had virtuous heroes, colorful sidekicks, pretty heroines (but few kissing scenes), black-hearted villains and plenty of horse riding and gun shooting. The formula varied little until the mid-thirties when singing cowboys took the lead. 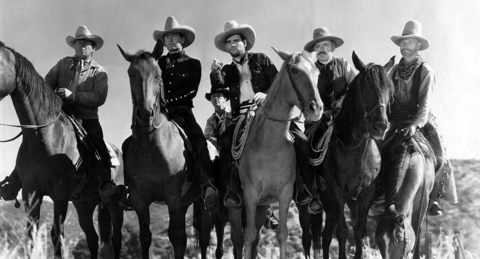 But the king of them all was ex-USC football player and studio propman John Wayne. He’d gotten a big break in Raoul Walsh’s 65mm superwestern The Big Trail, but when it failed was consigned to the lower end of the Hollywood food chain for most of the Depression years, grinding out these simple pictures one after another. When John Ford tapped him for a lead in 1939, Wayne’s ability to project star personality was as polished as that of any studio great.

1934’s ‘Neath Arizona Skies is an even cheaper than usual program western, produced by Paul Malvern under his Lone Star brand (released by Monogram). The locations range around Los Angeles; I believe that one of them is actually on fire this week. With a couple of exceptions the acting is as modest as Malvern’s production, but always earnest. ‘Undiscriminating’ kid audiences found plenty to admire back in ’34, and modern viewers might be charmed as well. The late western film expert Robert S. Birchard loved movies like this, and would surely have dubbed Arizona Skies ‘a simple story for simple people’ — with a big grin. 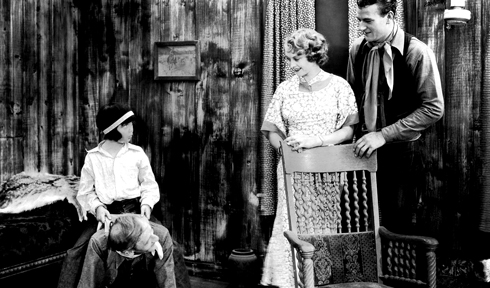 The simple story crams quite a bit into fifty-two minutes. Nice-guy cowpoke Chris Morrell is the caretaker for little Nina (Shirley Jane Rickert), a half-Indian child. New laws granting fortunes in oil lease money to Indian landholders will make Nina rich, and Chris determines to find her birth father to see that she’s not cheated. But a group of ne’er-do-wells led by the scurvy Sam Black (Yakima Canutt) decides to kidnap Nina and swipe her lease money. Helping Chris is his old pal Matt (George ‘Gabby’ Hayes) and beautiful Clara Moore (Sheila Terry), whose brother Jim (Jay Wilsey, aka Buffalo Bill Jr.) chooses this particular day to rob a bank. Along the way they find Nina’s birth father, Tom (Earle Dwire), and the battle lines between wrong and right are drawn.

Get ready for a lot of picturesque horse riding by a crew of pro Hollywood cowpokes that didn’t have to hang out for work at Gower Gulch — the actor-stuntmen that grouped around John Wayne and stunt whiz Yakima Canutt were the best in the biz. Many of the workers on these pictures preferred this level of production to the high-risk game at the bigger studios. Star Sheila Terry had plenty of good bits at Warners including a small role in a bona fide classic, I Am a Fugitive from a Chain Gang. Here she gets exactly one quiet, chaste conversation with Wayne, and spends the rest of the movie watching the boys play six-gun games. 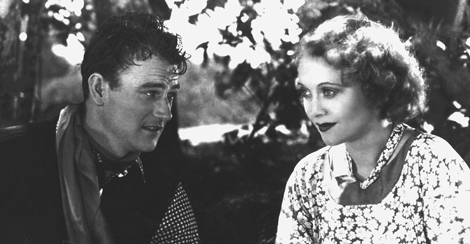 Gabby Hayes is the only co-star given billing on the posters. Earl Dwire isn’t billed at all, despite having a big speaking role. Yakima Canutt, eventually the second-unit director of some of the biggest action scenes ever filmed, is amusing as a main bad guy. He has very little screen presence, and we keep trying to remember which one of the interchangeable thugs is him.

Little Shirley Jean Rickert has her name misspelled in the credits. An original Our Gang kid, Shirley Jean is agreeably stiff, but rides a horse like a pro. I wouldn’t let any kid of mine do that kind of riding, movie or not. Director Harry Fraser’s pleasant, basic direction frequently cuts away to Shirley Jean’s reactions. Shirley Temple she’s not, but she was a typical ’30s child actor being fronted by exploitative parents – make the cute face, now go away.

Archie Stout’s cinematography is just fine and the action work is excellent — the fast trucking shots keeping pace with galloping horses are particularly smooth. Editorially the movie is a mix of the quaint and the slick. A good matte painting is used to locate the western street set in the middle of a verdant valley. Then the primitive sound editing uses the same exact horse gallop noise for most every scene, whether it’s three horses or a dozen that we see. The continuity cutting can become odd when action is intercut – we’ll leave a scene with a man heading in the direction of the door, to witness some action out on the range. When we cut back several seconds later, the man is just reaching that door that was just a couple of steps away. Editors on these low-budget films used to joke that the shows had to be cut so fast, they were given Movieolas that didn’t run in reverse.

The most fun is watching the skilled cowboy extras that can leap into the saddle and ride off without a single straggler left behind trying to get his foot into a stirrup. And we never feel confused as to which side is the bad side — the villains always gather in a tight bunch, and pick on whatever one of their group makes a mistake. A fistfight in a ranch house is actually quite good — these guys make the majority of the punches look like they’re connecting. Wayne has fun with one cute stunt. He neutralizes a bad guy and obtains a horse by roping the man from above, and then jumping from a tree limb. The guy is lifted into the air while Wayne glides down.

Producer Paul Malvern’s efficiency eventually won him a production position at Universal during the war years, where he took over some of the horror film units. When House of Frankenstein and House of Dracula suddenly include coach chases to pad out their running times, I always think that Malvern’s western wranglers are staging the action, and feeling uncomfortable with the change of costume. 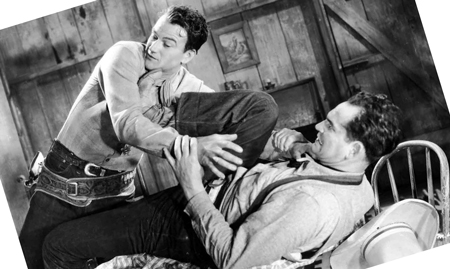 Olive Films’ Blu-ray gives us the vintage ‘Neath Arizona Skies in near perfect condition, allowing us to admire the B&W cinematography and think about the very basic direction and editing. I’ll bet that even film prints that showed on ’50s TV looked nowhere as good as this. John Wayne fans will need no encouragement to take a chance. He’s as charming and uncomplicated as ever.

Later in the year, Olive films will be doubling back for special editions with extras of two of their more popular ‘big western’ releases, Gary Cooper in High Noon and Nicholas Ray’s Joan Crawford western Johnny Guitar. The Crawford film will be restored to its original widescreen aspect ratio, a format fix that I’ll be talking about at every opportunity.

Olive has given this disc removable English subs, a thoughtful move considering that a goodly percentage of its still-alive fans will likely have hearing issues now. Good going.