Rita Hayworth in 3-D, in a hot story that was acceptable for 1925 and 1932, but too racy for repressed 1953. On a tropical island, a prostitute cabaret singer battles a fiery preacher missionary inspector for her freedom. Hayworth is dynamite, and it takes all of her talent to keep the show afloat, with so much interference from the equally repressed censors. 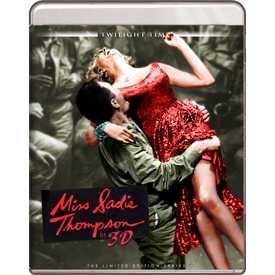 Yes!  3-D on Blu-ray shows no sign of going away, and this month Twilight Time carries the banner with its third (or is it its fourth?) release in depth. For sixty years this show has seen only rare screenings at 3-D festivals. We’re told that only a few premiere engagements showed it in 3-D when it was new. Rita Hayworth in 3-D? There ought to be an audience for that.

As people keep telling us, the 1934 enforcement of the Production Code improved Hollywood movies by forcing writers to be creative, suggesting sex instead of showing it. As Marine Sgt. Phil O’Hara would say, that’s a lot of bunk. Proof comes with the reasonably entertaining but wholly emasculated Miss Sadie Thompson 3-D from 1953. To neutralize W. Somerset Maugham’s steamy potboiler Sadie Thompson (aka Rain) for the censors, Columbia Pictures was obliged to run the story through a bleach rinse. Almost like Mae West back in the 1930s, bombshell Rita Hayworth is given an impossible character to play, a fantasy good-time girl that drinks, dances and carouses for the Marine Corps in private all-night parties, yet is really an innocent whose feelings are easily hurt. The producers amputate Sadie Thompson’s spine, substituting musical numbers and an unending series of moral sermons. Even the charming Ms. Hayworth can’t keep the show from seeming false. 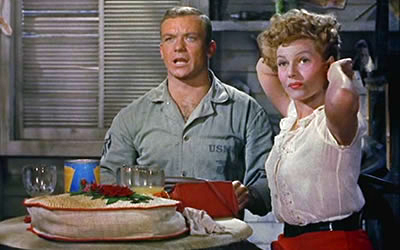 On her way to the far East, cabaret singer Sadie Thompson (Hayworth) is delayed on a Pacific island governed by the U.S. and occupied by the Marine Corps. Every jarhead is desperate to return to any post where white women can be found. Just a few weeks from mustering out, Sgt. Phil O’Hara (Aldo Ray) leads the pack of girl-crazy Marines, and corners Sadie’s attention for himself. But Sadie’s behavior infuriates visiting missionary inspector Alfred Davidson (José Ferrer), who has appointed himself the moral law on the island. On his say-so, the Governor orders Sadie to return to the states. Feeling guilty about her past, Sadie listens to Davidson, who makes it his business to reform her. But even Davidson’s associate, Dr. MacPhail (Russell Collins) knows something is not quite right with the zealous inspector.

This reviewer is often quite critical of actress Joan Crawford, but her 1932 Rain, co-starring Walter Huston and produced and directed by Lewis Milestone, is an all-round classic. It features a powerful clash of characters — Crawford’s Sadie is a prostitute who follows the fleet, plain and simple, and Huston’s Bible thumper a rigid autocrat who claims the right to torment and punish scarlet women. Milestone’s telling doesn’t avoid the unappetizing aspects of either combatant, nor does it back away from its harsh conclusion. Even painted in exaggerated makeup, Joan Crawford carries the dramatics so well that one would think the part had a personal resonance — Crawford’s pre-1925 history is something of a blank page.

Miss Sadie Thompson is evidence of the power of revivalism in the early 1950s, when opportunists found profit and careers in attacking comic books, movies and any political viewpoint left of center. Made the same year, Columbia’s picturization of James Jones’ From Here to Eternity had to be cleaned up quite a bit. Jones’ Honolulu Congress Club was little more than a brothel, but Fred Zinnemann’s movie transforms it into an odd dime-a-dance joint, where soldiers are somehow eager to merely sit and talk with the ‘hostesses.’ Hayworth’s Sadie is different things, depending on which scene we’re watching. She first claims that she’s just a singer, which justifies the film’s three songs. Sadie then tells Davidson that she can’t go back to San Francisco because she’s wanted as an accessory in a stabbing, and a ‘bad man’ there will cause her trouble. But Davidson is convinced that he’s seen her in Honolulu’s Emerald Club. He speaks the word ‘prostitute’ out loud, and more than once. (The only question is, what was Davidson really doing in the Emerald Club?)

That word ‘prostitute’ is the most shocking thing in the movie. Sadie likes to party with the Marines, who indeed leer at her; Rudy Bond and Charles Buchinsky Bronson are experts at this. But nobody really lays a hand on Sadie, despite what looks like an open provocation for gang rape, or at least a green light for the gruff-but-lovable Phil O’Hara’s amorous ambitions. When O’Hara learns of Davidson’s accusation, he’s furious. Instead of denying it, Sadie angrily confirms it, but only because she’s so enraged by the suggestion. Sadie then submits to Davidson’s paternalistic counsel, honestly seeking to atone for ‘evil ways’ that really haven’t been clearly established.

The whole point of the original Rain is that Sadie understands men, all kinds of men, better than anybody. When backed into a corner, she only pretends to be receptive to Davidson’s ministrations. She does what she has to do to get him out of the way, so she can fall back into the lap of the Marine Corps. The Fallen Woman is better attuned to the reality of human nature than is the selfrighteous man of God.

Miss Sadie Thompson sidesteps every serious issue in Rain, every step of the way. So as to not to bring the wrath of the church down on Columbia, José Ferrar’s Davidson is now not even a man of the cloth, just some short of church inspector. So as not to slight the armed services, the Marines are presented as life loving guys that give candy to the local kids. They leave the locals alone, even when the native girls run out of church services at the sound of music from the local bar. Sadie sings, dances suggestively, tosses her hair and distributes the beer, but doesn’t have to fend off a single unwanted grope or mash attempt. To further make the Corps look good we’re given the hotel owner Joe Horn (Harry Bellaver), a happy ex-Marine who married a native girl and is raising a crop of kids.

José Ferrer’s performance limits Davidson to his beetle-browed fixation on moral purity; the drama really goes South when the movie skips any depiction of his assumed self-loathing and anguish. Davidson’s character has really been curtailed. He’s no longer a real man of the cloth nor a tormenting sadist. In fact, he’s less a monster than a victim of his own suppressed desires. Harry Kleiner’s screenplay makes overt every bit of subtext and hidden revelations about Sadie and Davidson. Everybody weighs in on Davidson’s extremism, from his doctor-companion MacPhail to the Governor to Joe the hotel keeper. In this version Davidson’s fate is a tragedy that shocks even Sadie. Poor José Ferrar is robbed of any scene that might depict Davidson’s downfall. 1950s Hollywood cut no slack for defrocked priests or unworthy ministers: one fade-out/fade-up after his moral collapse, and Mister Bluenose is swimming with the fishes.

Rita Hayworth’s performance can’t be slighted — we admire her ability to make Sadie even partially consistent or credible. Seven years have passed since Gilda but Hayworth is still a major attraction. She’s not quite as sleek as she was in 1946 but her dancing is still terrific. Her singing voice may sound like her own, but it was actually provided by the unbilled Jo Ann Greer. The song “The Blue Pacific Blues” was nominated for an Oscar, but none of the music is particularly memorable. At one point a song by the Marines competes with and overrides a hymn coming from the church across the street. Hayworth’s three songs don’t really make it a musical, as two one of them are Sadie’s impromptu entertainments.

Once again Aldo Ray comes across with great work, giving O’Hara charm and sincerity. I saw Ray once because he was a buddy of the crew of old-time effects and stunt men that worked on 1941. He looked fine to me but his pals said his career had fallen through because of a serious drinking problem. Unsung effects master Logan Frazee went out of his way to praise Aldo Ray as a really great guy. 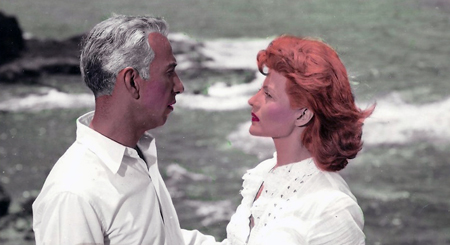 The 3-D on view is restrained but excellent, showing up best in the exteriors filmed on the island of Kauai. Depth effects are not forced; I can see where 1953 exhibitors would find little appeal in the process, even if it adds to the pictorial novelty – I don’t think ticket prices for 3-D pictures were raised as they are today. Rita Hayworth is as well served here as was John Wayne in Hondo: were they the biggest stars to appear in 3-D? The posters said ‘See Rita in 3-D!’, but didn’t exploit the obvious hound-dog angle as had It Came from Outer Space, which encouraged ticket buyers to imagine actress Kathleen Hughes’ figure projecting into the third dimension.

Miss Sadie Thompson plays well for what must have been a major photochemical and digital rescue job. The image is sharp but grainy, and some reels look as though superhuman efforts were required to pull color out of faded negatives. At about the fifty-minute mark the color and grain improve dramatically, and mostly stay that way for the rest of the movie. The most surprising scene is Sadie’s close-quarters song & dance ‘The Heat is On!’, where the Marines crowd around her as if playing a dice game. The quality drops just enough to make us think that we’re looking at replacement footage; the smoky room plays havoc with the grain. I don’t want to make it seem as if the film is badly injured by these jumps in quality, but you will notice them.

A full Isolated M&E (Music and Effects) Track is included, as is an equally grainy original trailer –what, did Columbia take in a bum batch of Eastman film or something? A new audio commentary pairs writer–producer-director Steven Peros with frequent commentary host David Del Valle. Peros makes the point that, although Hayworth’s Sadie refuses to say she was a prostitute, she’s betrayed by her guilty looks when Davidson accuses her. Mr. Peros also takes Sadie’s ‘confession’ to Phil at face value, when she’s really throwing his accusation back in his face, just as her Gilda had done to Glenn Ford seven years earlier. I just think the character has been purposely muddled to dodge censor bullets. Maugham’s Sadie Thompson feels no real guilt about her profession, so when this version makes her conversion sincere, the original’s real meaning is thrown away.

A separate video piece gives us actress Patricia Clarkson, who offers an introduction for the film recorded for an earlier DVD release. She’s charming, but all of what she says can be found on the movie’s Wikipedia page. The Wiki page’s slam against Memphis censor Lloyd Binford resonates with me; I have a 1955 unpublished Robert Aldrich editorial decrying the Southern Baptist’s success at dictating movie content to Hollywood. I waited to read Julie Kirgo’s insert booklet notes until after I wrote my review. She provides some fascinating history about the play and movies that I didn’t know, and slams the censorship hypocrisy even harder. More power.