Clint Eastwood’s mint juleps ‘n’ murder epic is an easygoing pleasure. Kevin Spacey, John Cusack and a host of great performances guarantee interest, but maybe I have to go to the book to really understand what’s going on. A solid ‘A’ for this one, Clint. The Savannah tourism board must bless you in their nightly prayers. 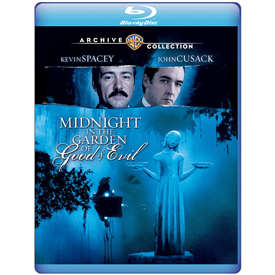 Clint Eastwood isn’t a favorite director but he made his share of fine pictures, and Midnight in the Garden of Good and Evil is one of his best. Dramas about high-stakes court cases have been around forever, but this one is based on the beloved book by John Berendt. The city council of Savannah, Georgia surely loves this movie, for it presents their town as a home away from home, or better, a heaven away from home. People familiar with the book say the movie can’t touch it, and it is true that some of the content in John Lee Hancock’s adaptation has been tamed or jettisoned. But Berendt took some liberties with the real-life case behind the story, too. Eastwood’s production is gorgeous and a pleasure to watch. Not only are John Cusack and Kevin Spacey well cast, the director’s daughter is a major asset in an important part. Just like the film’s John Kelso, we find Savannah to be a very special place. 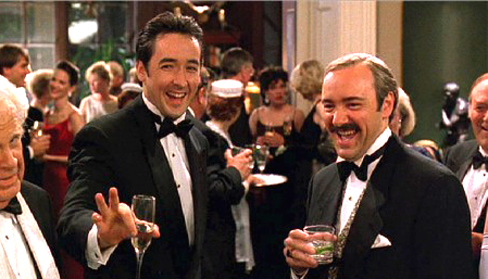 Magazine writer John Kelso comes to Savannah to do a tiny blurb on a famed Christmas party thrown by local millionaire Jim Williams (Kevin Spacey), who by revitalizing the town and restoring a famous house, has made himself the center of the social whirl. The onslaught of old-fashioned southern charm and graciousness bowls Kelso over — everybody is nice, informal and funny. The town’s live & let live attitude embraces odd folk like Minerva (Irma P. Hall), a voodoo practitioner, Luther Driggers (Geoffrey Lewis), a scientist who behaves like a madman, and man who walks a non-existent dog in one of the beautiful parks that appear to be on every second block. Despite the failure of lawyer Sonny Seiler (Jack Thompson) to get control of Kelso’s reportage, Jim opens up his private life to John. His house tour takes in antiques, artworks and collections better than those found in museums. John enjoys a pleasant flirtation with florist Mandy Nicholls (Alison Eastwood) and takes in the outrageous Lady Chablis (herself), a transsexual entertainer. But everything changes when Jim Williams is arrested for shooting and killing Billy Hanson (Jude Law). The sheriff has evidence that counters Jim’s story of self-defense. John stays on as a witness, to help prepare his new friend’s defense – and write a book. 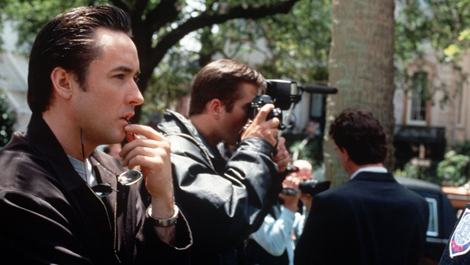 Eastwood seems to have made Midnight in the Garden of Good and Evil a partial ode to the great songwriter Johnny Mercer. Besides the use of the theme song Skylark, the show visits Mercer’s grave and the house where he lived. It makes sense — the one time I was in Eastwood’s company, the subject he wanted to talk about was jazz music. The music goes well with the story, even though Savannah from John Kelso’s viewpoint does seem like a la-la land: everybody he meets smiles; many destinations are within walking distance, rich people pamper him, and gorgeous women wake him up at two a.m. to ask why he isn’t at the party. Were this a different kind of movie all the glad-handing and southern charm might be revealed as something of a sham. Some things are almost sublimated: are Jim and Sonny using John as an unbiased witness to help him evade a murder conviction? And there might be more of an acknowledgement of the racial and economic divide. Sure, if I never left Bel-Air and Brentwood, it might think I was in paradise too. As it is, Midnight is the kind of movie we return to just because it feels good to be there. We’re as charmed by the beautiful town and the glossy social life as is Kelso. It’s exciting, too – everybody is ‘open’ but everybody has a secret. As John says, everybody’s crazy and drunk and the women all carry guns.

Cusack’s John Kelso is a fine identification figure. The untold conspiracy angle comes out when we learn that Jim asked for Kelso by name, and has read his book. John Kelso plays the guest role well. He lets himself be pulled this way and that but doesn’t allow himself to be compromised. When he decides to cover Jim’s trial he stops being an observer and becomes a semi-participant. Kelso appears to be a very independent man of means as well. He can afford to drop his magazine assignment and change his residence to Savannah, and we don’t hear about him leaving relatives or a sweetheart behind. 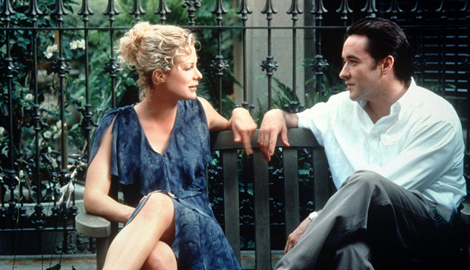 Director Eastwood certainly found a great cast. The rest of the world took notice of Kevin Spacey earlier in Glengarry Glen Ross, but I didn’t catch up to him until this picture and L.A. Confidential, made the same year. Spacey inhabits Jim Williams right up to his silver tie clasp. As millionaires go Williams is a delightful eccentric. He convinces that he has nothing to hide, while revealing precisely nothing about himself. Again, with the emphasis steering the movie away from the standard murder mystery genre, we just accept Spacey’s Williams at face value, like good guests. Helping Williams seem more normal is a supporting cast of much wilder eccentrics. Encouraged to take in the local color, Kelso finds a gallery of mostly benign kooks. The show brings in a merely decorative Voodoo theme with the old bag lady / priestess Minerva; despite the fine acting her episodes are something of an exotic diversion. Perhaps the book suggested that spiritual values were guiding events? The adaptation exaggerates the Luther Diggers character, making him a full-on nut that goes about with flying insects attached to his clothing by threads. He carries a vial of liquid he says he’s going to poison the whole community with. The community also tolerates the black transsexual Lady Chablis, who provides gentle comedy embarrassing Kelso by crashing a formal black cotillion. I won’t make any arguments about the lack of serious black characters, because Eastwood successfully dodges the race issue by giving entertaining blacks center stage. I don’t think mainstream audiences would feel the same way about Lady Chablis, if she weren’t funny.

It looks like a few characters may have been lost in the effort to bring the movie down to its 2.5-hour running time. Kim Hunter is in the movie, but for what seems only a few shots. On the other hand Eastwood gets away with casting his own offspring in his movie, a trick that is almost always a pitfall for directors. Francis Coppola got burned for it, and so did Will Smith (but not enough). To our delight, Alison Eastwood is more than good in her role. She’s a fine actress and sings well, too. Her Mandy is a fantasy of Southern Hospitality. What white male wouldn’t want Mandy showing up at his door?

Even with its half-buried clues, Midnight purposely steers away from a neo-noir murder mystery. There are no real revelations when John Kelso runs up against Williams’ genteel brick wall, that says, ‘I know the truth but you’ll have to keep guessing.’ John Kelso doesn’t interfere in the Jim Williams case even though he himself has grave doubts about Jim’s innocence. And what do you know, by the fade-out it looks like Kelso is about to become a transplanted Georgia rebel. Those Southerners really know how to live. 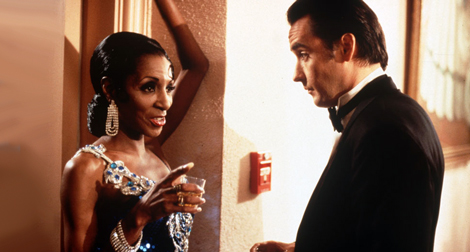 The film instead luxuriates in its southern atmosphere and sexually eccentric characters. On the subject of gender politics, the show isn’t as liberated as it pretends. Eastwood reportedly changed the sexual preference of the John Kelso character, which takes away the tension from scenes where Kelso and Jim Williams exchange ambivalent stares. Lady Chablis is so entertaining that we don’t think about the fact that she couldn’t survive in a less understanding environment. The homosexual/pan-sexual theme is everywhere in the story, yet undeveloped. When the revelations about people’s sexual preferences come out in the courtroom, Eastwood makes a big point of cutting to disapproving faces. Not just a couple faces, but six or seven looks of disdain and disgust. I have a suspicion that Eastwood agrees with them, at least in principle. William’s fate is tangled up in his relationship with young thug and boyfriend Billy Hanson (Jude Law), so this movie still tells the old-school story that ‘wrong’ relationships spell doom. The sympathetic but essentially conservative Midnight in the Garden of Good and Evil accepts deviations from the norm, if they’re funny. And rich white guys can be whatever they want.

The Warner Archive Collection Blu-ray of Midnight in the Garden of Good and Evil is a stunning HD encoding of this handsome film — it’s one of those movies that I reach for when I want to relax, just because ‘being there’ is so pleasant. The old DVD was no beauty, so the improvement is more than noticeable. Eastwood had by this time a crack team of creative associates to help him make challenging films like this one. Several years beyond the directing Oscar win that gave him the freedom to film whatever he wanted. He didn’t have to make any senior citizen Dirty Harry movies, unless you count Gran Torino.

Viewers familiar of unfamiliar with the book will be amused by the main extra, a half-hour older docu that takes us to the Savannah location to see the real story and people behind the book and movie. Lady Chablis is present, along with another local who played himself in a smaller bit. Like the movie, we feel we are being immersed in a different culture, one where it didn’t really matter that the South lost the war. Everybody I talk to says that the movie is good but the book is even better. One reason that I return to Midnight in the Garden of Good and Evil is that it was a favorite film of the late Robert S. Birchard, a good friend in formative times. Bob wasn’t always complimentary about new movies — boy, did he like to rag on Robert Altman — but he saw nothing but positive values in this movie. Bob was so ‘into movies’ that only when he was gone did I realize how little I knew about his private life. So the connection remains.

Is it a new trend, or is the WAC trying to make me feel old? The text on the back of some recent keep cases is so small and dark, I had to find a bright light and a big magnifying glass to decipher the words. What would those pesky lawyers say?