Writer Jesse Andrews and director Alfonso Gomez-Rejon overturn the formula for the modern teen comedy: they lay on the quirky storytelling and goofy movie parodies, but also give us characters that are reasonably human and complex. We’re soon invested in a warm and rewarding drama. Young actors Thomas Mann, RJ Cyler and Olivia Cooke deal with real problems, and the movie doesn’t try to change the subject to sex in every scene. A charming show, very worthwhile. 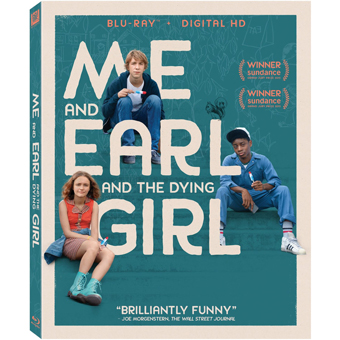 The fundamentally sentimental Me and Earl and the Dying Girl sails above aggravating present trends in comedy-dramas about teens. It often tries too hard to be adorable, but the sincere approach of all concerned puts it in far the plus category. In one sense it’s a play-safe picture that pulls out numerous cutesy tricks, including goofy voiceovers and Tarantino-esque format interruptions. Comic movies-within-movie diversions practically come out and beg, ‘please like me we’re trying so hard.’ But the film has plenty of what counts — good core writing and winning performances all around.

Senior Greg Gaines (Thomas Mann) intends to survive Schenley high school by being ‘casual and invisible.’ He’s friendly with all of the cliques but close to none of them. He instead leads a secret life making movies with his friend Earl Jackson (RJ Cyler), who he’s known since Kindergarten. They hang out in the office of teacher Mr. McCarthy (Jon Bernthal). Things become difficult when Greg’s Mom (Connie Britton) insists that Greg befriend classmate Rachel Kushner (Olivia Cooke), who has just been diagnosed with leukemia and is going into chemotherapy. Greg reluctantly consents. After some initial hostility and awkwardness a relationship forms. Rachel finds Greg indirectly charming and likes his creative life with Earl, who contributes his own pragmatic ideas on the right way to deal with Rachel’s condition. Greg neglects his schoolwork, putting his college application process in jeopardy. His relationship with Rachel also ruins his efforts to remain invisible at school. He’s targeted by the popular girl Madison (Katherine Hughes), who expects him to make an inspiring movie to make Rachel ‘feel better.’ Being forced to do things isn’t helping Greg take charge of his own decisions… but he knows he’s being strongly affected by Rachel’s sickness.

Me and Earl and the Dying Girl does its best to look ‘special.’ It’s good that the core story and characters work so well because we must wade through a great many only mildly amusing narrative tricks. The show initially appears to suffer from the ‘movie cutes,’ as it aggressively affects a quirky narrative style, or more like wanna-be quirky. Stylized camera angles affect the POV of an insecure teenager. Ironic Dickensian ‘chapter headings’ float on the screen as text. When he accidentally ingests drugged cookies, Greg hallucinates large walking stuffed animals, as if earning extra-credit surreal kicks.

We also see many excerpts of Greg and Earl’s movies, clever feature parodies as polished as anything seen on Saturday Night Live. Greg films some of them with a 16mm Bolex, yet they come off looking as clean as the feature around them. The films are very amusing in themselves, but they don’t really relate to the core relationship drama between Greg and Rachel.

Sometimes the filmic insecurity gets a bit thick, as if the filmmakers are convinced that nobody will watch a straight story. Relationship flashbacks leap in like Tarantino plot sidebars. The soundtracks of various spaghetti westerns and even Vertigo are used as emotional punctuation. At one point a poster pinup of Hugh Jackman as Wolverine gives Greg advice on how to talk to Rachel. Cinema references are constantly in play, to the film being spoofed and also to the art pix that Greg and Earl admire, starting with movies by Werner Herzog. At least they’re not obvious choices, as when Greg plays Dirk Bogarde’s role in a parody of Death in Venice. Greg’s narration makes the whole movie a flashback, but he violates the ‘flashback contract’ by fibbing to us once or twice about basic things we’re seeing. Interestingly, we can guess that he’s fibbing.

If that’s all there were to the show, it would just be another attempt to recreate the visually flippant style of Richard Lester’s The Knack. But writer Jesse Andrews has an excellent grasp of his characters, and Alfonso Gomez-Rejon is terrific at staging awkward teen interactions. At first Greg seems a copy of the teenager in the comic strip Zits, crossed with the bicycling hero of the ’80s film Breaking Away. Greg is stuck in an adult-supervised situation, having to mind his manners while visiting a girl he doesn’t really know, in her bedroom full of frilly girl stuff. Andrews’ script immediately nails a truth about the behavior of awkward teenage boys — when socially stressed, Greg feels compelled to say things he doesn’t mean. Then he has to apologize: “I’m like innovatively stupid.” Greg expresses himself by improvising goofy stories on the spot, and Rachel likes that. Actor Thomas Mann is 24 playing 17, and manages to bring it off. Greg is trying his best to slip through life without being noticed. That plan isn’t going to work out.

RJ Cyler is refreshingly deadpan as Earl, Greg’s comrade in the films they sign with an imitation of the ‘Archers’ logo. More than a sidekick or neo-token buddy, Earl contradicts and criticizes Greg every step of the way, and can be depended on to betray his trust, with good intentions. Director Gomez-Rejon can take credit for making the characters seem self-motivated, and independent of the clever dialogue written for them to speak. The overall charm also compensates for the choice of the name Earl, as a rhyme for the title.

As Rachel, Olive Cooke makes her English accent totally disappear — how do English actors do that, we ask. Faced with a weepy role, Cooke chooses to underplay all the obvious angles. She barely even cries. Stuck alone in her room, Rachel is soon charmed by Greg’s attention, and begins to enjoy his stabs at droll humor. Her dialogue stays good as well, even the clever lines. Hearing about Greg’s family, Rachel sympathizes: “Jesus, you need to apply for a dad refund, immediately.”

Among high school movies I’d class Me and Earl and the Dying Girl right up there, close to the near-perfect Election and the frequently touching Juno. Earl and Greg make the jump from cluelessness to a partial awareness that life is a web of relationships, none of which are perfect. The moment Greg relaxes with Rachel, she likes him. That’s very accurate. Greg jokes about a romantic relationship developing (more Tarantino fib-scenes) but accepts the way things are; it’s refreshing to find a film about young people that doesn’t turn on easy sex or bodily functions.

The supporting cast has more traditional roles to fill. Katherine C. Hughes brings poise to her Madison, even when the girl grants herself the right to tell Greg what to do about Rachel. The high school babe that so intimidates Greg turns out to not be a femme fatale, but a thoughtful person. Jon Bernthal was a hulking, brutish soldier in Fury; here he’s an ideal teacher, who even wears tattoos. As perceived by Greg, Connie Britton’s Mom is a perpetually concerned nag. SNL’s Molly Shannon is Rachel’s mom Denise. The woman copes with her family disaster by staying sloshed on wine. She’s overly affectionate to Greg yet the movie dos not imply that something could develop in that direction. Instead we consider Rachel’s distress at her mom’s future plight. Nick Offerman of Parks and Recreation is almost comic relief as Greg’s Dad, described (and pigeonholed) as ‘a tenured sociology professor.’ We soon realize that means he has almost zero responsibilities and can spend most of his work week in his pajamas at home, cooking and cultivating an interest in foreign films.

The movie doesn’t pin a false closure on Greg’s journey by giving him soulful moments with any of these people. It instead makes the quietly impassioned statement that people are fascinating if you take the time to learn more about them. Rachel turns out to be a richer person than Greg ever imagined, a ‘secret artist’ just like himself. The movie puts across this epiphany in a deceptively simple way, leaving us with a very good feeling about the characters. I can imagine the screenplay formalist Billy Wilder being impressed, when we learn what all of Rachel’s scissors were for. At the end, we’re no longer thinking of Me and Earl and the Dying Girl’s ‘cute’ affectations. It’s a warmly human picture, even if its hero says things like, “My high school memoir film was so bad it almost killed someone.”

20th Century Fox Home Entertainment’s Blu-ray of Me and Earl and the Dying Girl is a beautiful encoding of a picture that’s both fun and unusually moving. The widescreen images are at all times colorful and attractive; Gomez-Rejon and his cameraman keep the framing lively, even with the frequent inclusions of bits of other people’s famous movies.

The disc is a natural for extras — if Greg’s joke movies appeal, you’ll find them all in their own gallery among the trailers, stills and deleted scenes. Greg’s final ‘film for Rachel’ is present as well. I like that Greg and Earl decided not to use the lame motivational statements they recorded with Rachel’s classmates. Alfonso Gomez-Rejon provides a full commentary, contributes to an interview making-of piece (with writer Jesse Andrews) and even has a sit-down extra with Martin Scorsese. That’s amusing because a bit of Scorsese’s commentary for Criterion’s The Tales of Hoffman shows up in the movie proper.