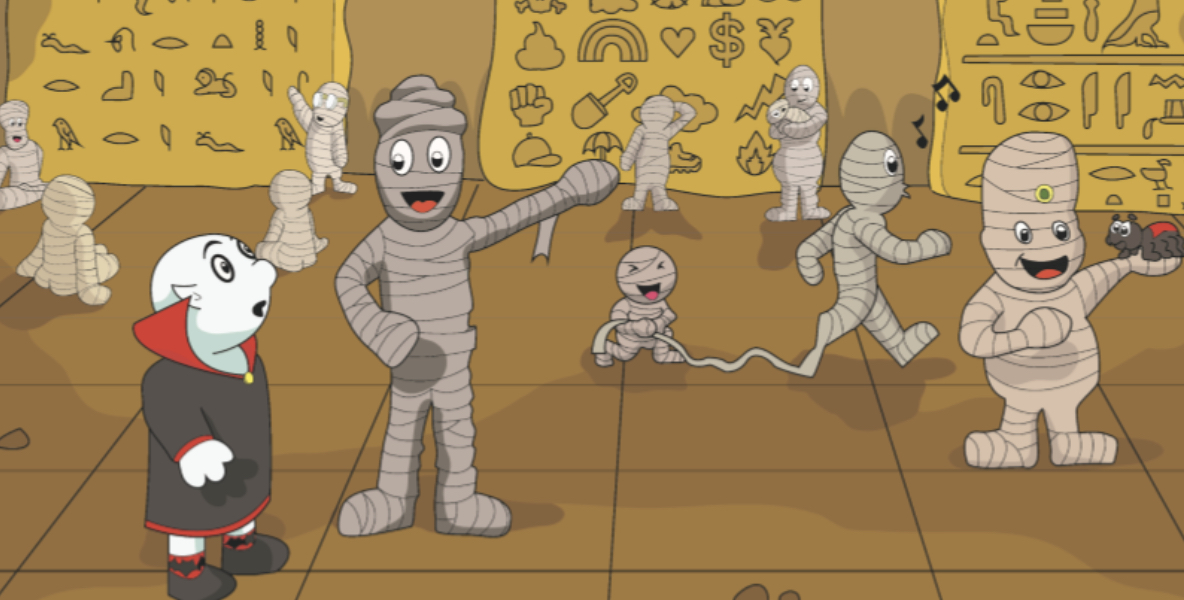 That three-word mantra is, of course, the perversely welcoming chant offered by Tod Browning’s Freaks (1932) as the titular group of circus performers, trodden-on by fate and circumstances but also proud and protective of their community, bring a distinctly unwilling new member into their fold. The movie is perhaps the most singular declaration of unity in the history of the horror film, and over the years that chant has become shorthand among horror aficionados, perhaps popularized during the generational influence of Forest J. Ackerman and his labor of love, Famous Monsters of Filmland magazine, for identifying and accepting not only those who were different, who were misfits, but specifically those who grew up loving the world of monsters and classic horror and felt they were, at least initially, alone in that love. 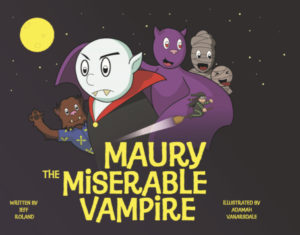 A significantly more benign frequency of that cry can be heard at the beating heart of a new children’s book,  Maury the Miserable Vampire, written by Jeff Roland and illustrated by Adamah Vanarsdale, a delightful allegorical tome for tots and their parents who would seek entrance into the world of classic monsters in the most inclusionary and empathetic manner possible.

Maury is a vampire whose experience with being undead, despite the outward appearances (fangs, cape, a coffin for a bed, an eerie castle on the hill for a home), has, in Roland’s conception, less to do with leeching the life from unsuspecting victims a la Lugosi and Lee and more to do with the existential isolation of the vampires in Jim Jarmusch’s exquisite Only Lovers Left Alive, in which those cursed by immortality must face a future of endless time essentially alone, carried by the tide of time while all else inevitably becomes history, tethered to mortality. If that sounds a bit heady for a book aimed at kids just learning to read, well, it probably is. But in Maury, Roland envisions a vampire whose perpetual existence is defined not by his desire for blood, but by his at first latent desire for a connection to others who might understand his feelings, his interests, his needs—someone, in other words, to talk to, to share with. The author assumes, and rightly so, that an age-appropriate introduction to all the other good stuff that turned him and countless others into fans of the horror genre will all come in good time.

But for now, what Maury really needs more than a plasma cocktail is a friend, and he finds one in Barry the bat, who comes to the window of Maury’s castle one dark night (presumably invited in) and becomes a friend, caretaker, and especially a sounding board for our pessimistic protagonist. Barry has, it seems, an inexhaustible capacity for listening to Maury’s complaints about his life and the world; he is, as Roland writes, “exactly the kind of friend most people would want,” even if Maury himself doesn’t exactly return the favor.

One evening Maury, expecting Barry to lift his coffin lid and greet him into another dark night, finds that his companion is nowhere to be found. Once again faced with the prospect of wandering through a dank and vast castle of loneliness all by himself, the agoraphobically inclined vampire reluctantly leaves his home in search of his only pal. Upon exit from behind the castle walls, he is of course greeted by a mob outside his door. But this mob isn’t bearing torches and demanding justice. Instead, they’re a group of children who can always be found parked at the foot of the hill beneath Maury’s gothic digs, offering an imploring message of friendship which Maury has always fearfully ignored. He trips down the steps, humiliating himself in front of the gathering of mortals, and flees, thus beginning a globetrotting adventure in which Maury hopes to find Barry, to be reunited with the one soul who seems to understand him, to really care about him. 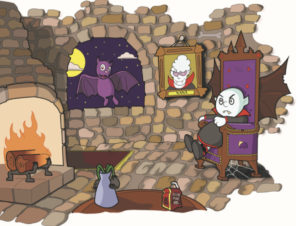 Roland and illustrator Vanarsdale provide plenty of evocative, but pleasingly rounded and kid-friendly images of the monsterverse through which the miserable vampire will travel, and they approach Maury’s quest with lots of good humor and empathy. As Maury searches for his pal, he discovers a world he had no idea existed, one populated by mummies, werewolves and witches, all of whom help him in his purpose and guide him toward a better understanding of cooperation, empathy and, perhaps most importantly, how not alone in the world he really is. This is a message that will resonate with anyone, but perhaps especially young, nascent horror fans, as well as those of us who started out believing our love of monsters and horror was what separated us from all the “normal” folks and who discovered an entire world of kindred spirits through the auspices of Ackerman, Famous Monsters,  favorite horror movie TV hosts and, later, Fangoria and other dedicated periodicals and websites worshipped by self-proclaimed weirdos.

And the author and artist quite literally provide maps detailing Maury’s discovery of that world which punctuate the tale with wit as the distraught vampire crisscrosses the globe in pursuit of his lost buddy. The maps begin by marking the continents with relief descriptors of some of the more earthbound horrors one might encounter on a journey around the world—“PIRANHAS” tattooed on the South American jungle, “SCORPIONS” over Eastern Europe, “UNCLE VLAD” set upon Romania and, presumably in a nod to the Silent Night, Deadly Night franchise, “SANTA CLAUS” over the North Pole. But as each new map appears, the locations of more transcendent monsters begin dotting Vanarsdale’s global landscape, detailing where one might encounter “NESSIE,” “YETI,” “SASQUATCH,” “SEWER GATORS,” and “MOVIE MONSTERS” (in the Southwestern portion of the United States, of course). The effect of these maps, beyond their comedic value, of course, is to unify Maury’s world and illustrate it as more far-reaching in its capacity for containing monsters, benign and otherwise, than a cloistered denizen of the land of the undead might have previously imagined. And it bolsters Roland’s point that for those looking for unity and companionship within the world of horror fandom, and in the world at large, one need not feel for long like a freakish outcast, that sympathetic souls (and even the soulless) are out there waiting for those who might be seeking them.

It will comes as no surprise that Maury’s nocturnal pursuit of his missing friend works out for the best—Roland, as many horror dads and moms I know, eventually found his own way toward the community of like-minded genre aficionados, and he infuses that spirit of the fulfillment of discovery into the conclusion of his tale. It all ends with a big monster party, one that includes even the aforementioned and decidedly non-monsterish mob gathered outside Maury’s castle digs, that will look like a top-notch Halloween party to the old as well as the young. The long-shot celebratory illustration in Maury even rather reminded me of a similar and cherished image from one of my own childhood favorites, the climactic party scene from P.D. Eastman’s Go, Dog, Go, and Vanarsdale’s teeming tableau is packed with similarly delightful details, of mortal and undead guests intermingling with glee and humor. 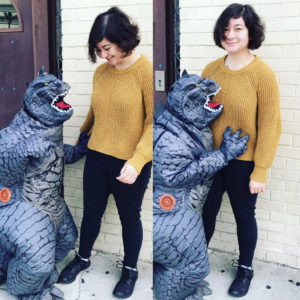 There’s even a cameo appearance by Roland’s toddler daughter at that monster party—my daughter and I met them both for the first time this past summer while standing in line to see King Kong vs. Godzilla at the Vista, a storied Los Angeles movie theater. Little Ms. Roland was dressed as a tiny Godzilla and approached us with warmth and eagerness, proving that Roland, like a genuinely good horror dad, practices what he preaches and can see it blossoming in the way his own child embraces not only the world of monsters, but the world as a whole.

Just in time for Halloween, and for all seasons beyond, Maury, the Miserable Vampire is a charming tale that will satisfy toddlers, young readers, and even the parents who will likely find themselves reading it to their children before bedtime. In fact, the only solid complaint I have about this lovely little volume is that Roland didn’t concoct it 15 or so years earlier, so I might have read it to my own kids before sleep on a dark and stormy night.

(Maury the Miserable Vampire is on its fourth printing as a traditionally bound book, and this Monday, Oct. 28, Roland is launching the digital e-book version, usable on any device that can display a PDF. That digital version, as well as the physical book and a whole coffin-load of Maurymerch (T-shirts in kids and adult sizes, shopping bags, coffee cups, et al, are available now at the Maury the Miserable Vampire website.)