After four years Martin Scorsese is back with another six filmic gems from all corners of the Earth. Love struggles in the slums of Thailand and the economic boom town of Taipei; underdog heroes undertake troubled missions in Turkey and Kazakhstan, a Malay storyteller plays cinematic games with basic narrative, and a vintage Brazilian art film is pure visual poetry. They’ve all been rescued by the World Cinema Project. 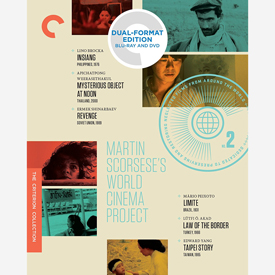 I readily confess that in my patchy history of film festival attendance, I gravitated not toward the really obscure foreign films, unless they promised to be as entertaining as things I’m more familiar with. Based on the results, one of the more worthy ‘film culture’ projects of the past decade has been The Film Foundation’s World Cinema Project, which seeks to give a fair break to films made outside the main movie capitals. Criterion’s first disc set from late in 2013, Martin Scorsese’s World Cinema Project No. 1 gave us six impressive & impressively remastered ‘regional’ films that enjoyed little or no access to the art theater circuit. None are dry ethnographic studies of ‘native’ life, and all have stories and themes at least as engaging as what passes for quality art film today.

With a gap of four years, this Martin Scorsese’s World Cinema Project No. 2 continues the good work. The Project throws its net wider than mere ethnographic interest. A story from Kazakhstan turns out to be set in Korea. A Thai feature is as intellectually complicated as anything from Europe. And a rescued Brazilian experimental film is a legendary title unavailable in decent quality for eighty years.

The first film up comes from a prolific, highly humanistic Filipino maker of popular, compassionate movies about the working poor. Hilda Koronel is Insiang, a decent Filipino girl victimized and coarsened by a degraded life in a Manila slum. Her selfish mother throws out their relatives in favor of a new boyfriend, a hood who sets his eyes on having both women for himself. The injustice mounts as Insiang is blamed for her own rape; she turns to a boyfriend for protection and for her trouble receives only more abuse. Her eventual course of action makes perfect sense — this is what brutal living conditions do to people. Director Brocka immerses us in the day-to-day chaos of the slums, with an excellent group of actors. He even manages some impressive visual grace notes – there’s nothing primitive about the direction, especially a scene of violence late in the show.

We’re told that the relatively recent Mysterious Object at Noon was in serious need of restoration, having been filmed on 16mm (in the odd ratio of 1:60) and blown up to 35mm. Weerasethakul’s decidedly non-linear story is as twisty as The Sargossa Manuscript, and uses the tradition of storytelling to radical cinematic ends. No sooner does a storyline appear, than another narrator takes over and changes it, sometimes doubling back on previous events, adding fantastic elements. A nurse acquires a mysterious double, and a curious ball is said to be a boy in a different form. The various storytellers even include children, who argue about the proper course of events. The director openly plays with the plasticity of film, and the result is mystifying, charming.

This meditative epic by author Anatoli Kim was made by a director in Kazakhstan, who had to invent a Korean setting almost out of thin air — made just prior to the collapse of the Soviet Union, he had no way to do thorough research. The story of Revenge covers two generations. A man spends his life seeking vengeance for the senseless killing of his daughter, and then passes the blood oath down to his son, almost as if it were a disease. Shinabarev’s script gathers a curious series of set pieces, from a royal court to an empty beach; wise men dispense wisdom while the son-raised-for-vengeance is given an offer of love by a Romanian woman. It’s a bizarre parable about dedication in a cruel world, which operates with its own internal logic.

TCM’s presentation of Mark Cousins’ encyclopedic miniseries The Story of Film: An Odyssey was often a trial, as it so magnified the critic’s personal interpretations of film. But he certainly had the film clips to back him up, many from directors most filmgoers have never heard of. One intriguing clip came from Limite, a Brazilian picture made, as were many aggressively artistic endeavors in the silent era, by an enthusiast poet with access to plenty of money. Restored from the brink of extinction and projected at a correct speed with a remastered soundtrack of Peixoto’s original needle-drop music choices, the abstract movie tells a story that I could not fathom at first viewing. But the picture overflows with images of waves, characters walking in rural settings (just outside Rio, we’re told) and adrift on the high seas in a leaking rowboat. The key images — the woman with a man’s handcuffed hands over her shoulders — are impressive, and so are some visual choices that seem to bridge the gap between objective coverage, and a subjective delirium. It’s no Un chien Andalou but is indeed a full-blown cinematic work of art.

The action film Law of the Border is an historically important expression of a volatile political situation that exists to this day. The charismatic Hidir, a Kurdish smuggler with a conscience (major Turkish star Yilmaz Güney) tries to do the right thing for his son, his people, and the law of the land. An Army rep means to stop the illegal smuggling from a neighboring country (Syria?), and the noble Hidir goes straight and helps the government start a school. But competing smugglers and greedy merchants use treachery to force his hand. The movie presents the entire problem: although smuggling is the only way to make a living, even a folk hero like Hidir can’t be above the law. Despite its reasonable attitude, the movie as well as its activist star were targeted by a later military regime. Only one battered print survived for The World Cinema Project to work with. Akad’s realistic characters and exciting action scenes attest to his talent.

The Project reaches back to protect an early film from the celebrated maker of Yi Yi. Recording a great change in the way Taiwanese city dwellers live, Taipei Story takes on a couple caught in the economic boom, where skyscrapers are popping up everywhere, old folks are stuck in dying businesses and spoiled kids rock away the nights as if they lived on the Sunset Strip. In the middle are Lung (Hsiao-Shien Hou), an ex-baseball star with a failing fabrics store, and his girlfriend Chin (Tsai Chin), who is downsized from her company. The story’s relationships form a complicated web of responsibility, resentment and guilt. Lung is hiding a relationship with a woman in Japan, while Chin has other suitors waiting for an opportunity. Lung’s relatives tap him for money he hasn’t got, while a businessman brother in America gives him the cold shoulder. The glittering background of the new city seems a setting mostly for disillusion. Yang’s picture looks utterly modern as well, as it captures an entire changing culture. When Chin dons dark glasses in the final scene, we see the attitude of a generation changing to something colder.

The Criterion Collection’s Blu-ray + DVD of Martin Scorsese’s World Cinema Project No. 2 gives us all six films in both formats, apparently anticipating their use in an educational context. Anyone who has tried to sample Third World cinema by getting VHS tapes or DVDs from ethnic storefronts knows the frustration of mangled, unwatchable presentations. It would seem that much of Mexico’s film heritage is marred by poor management and Argentina’s respected film history is all but nonexistent. Therefore it’s gratifying to see even these few world masterpieces given the curatorship they deserve.

Most are in tip-top shape, with Lino Brocka’s Insiang perhaps presented first because it simply looks so good. The museum piece Limite was partially rescued decades ago and Criterion has merely finished the job. It is grainy yet looks good enough to show the excellence of the original camerawork, with quality opticals, etc. It does have a patch that exhibits some Decasia– like disintegration, and an inter-title explains some lost footage. Law of the Border makes us realize that a great many important films from around the world have been politically purged; and that basic film preservation is unknown in many countries — negatives are thrown away, and the only existing copies are in private collections.

Martin Scorsese introduces each film with just a few brief and welcome remarks. I respond to his enthusiastic remarks here more than I do his Cinema 101 intros for established familiar Hollywood classics — as with the first collection, Scorsese seems genuinely excited to have made these personal discoveries. Each film also comes with an on-camera talk, either with the filmmaker or an enthusiastic critic. The illustrated book (it’s too substantial to be a ‘booklet’) has excellent essays on each show. The most important takeaway from these World Cinema collections is the realization that quality cinema and high film art aren’t limited to a few select world regions. I’m personally hoping for a renaissance of Cuban movies, which are at present available here only sporadically, with weak transfers. Kazakhstan has its film culture, with moviemakers that have been thinking internationally for decades despite political barriers. And Filipino filmmaking isn’t limited to the exploitative ‘Machete Maidens’ extreme that we’re accustomed to seeing here in our so-called developed cinema culture.