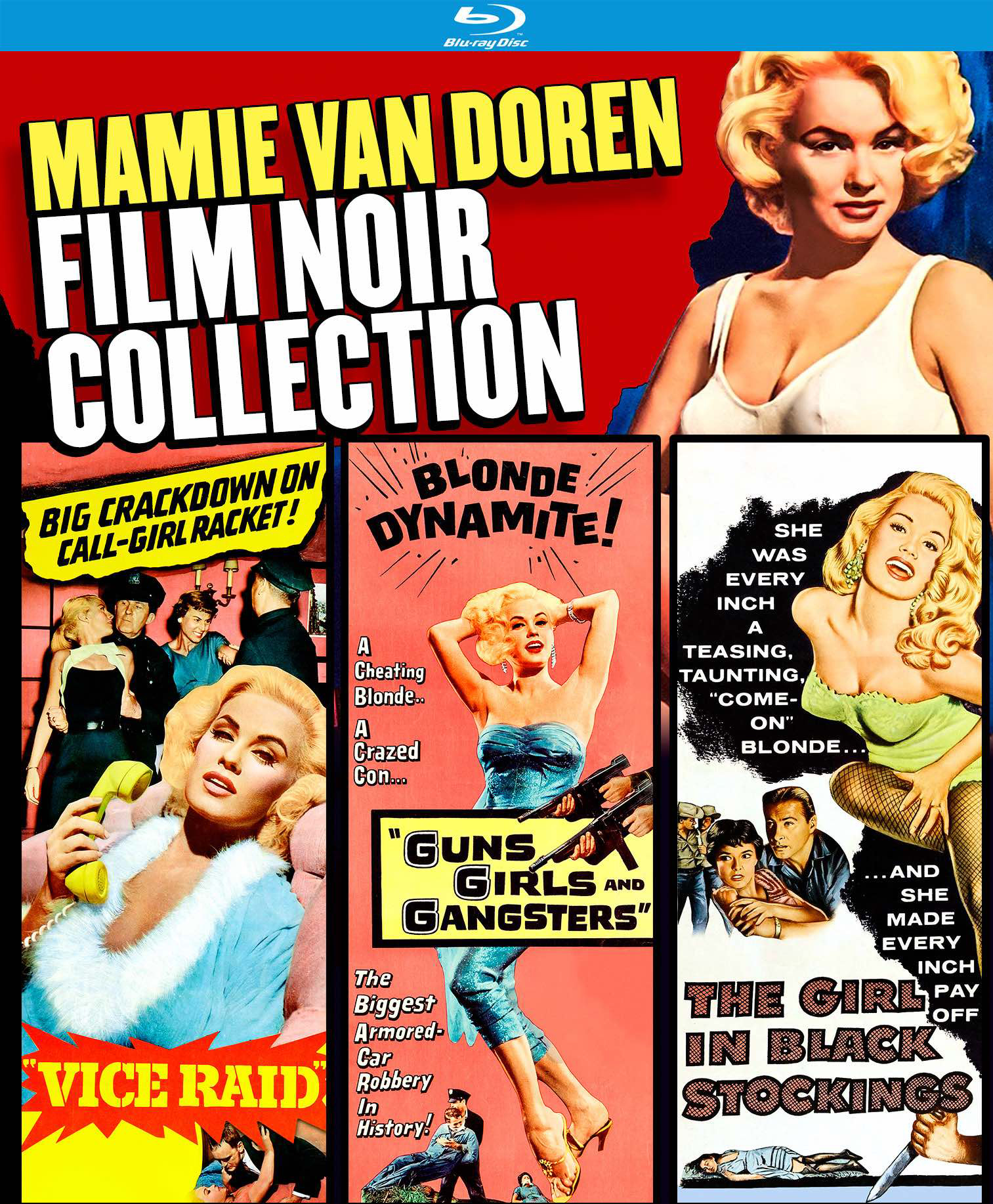 Mamie Van Doren, née Joan Lucille Olander, was born in Rowena, South Dakota in 1931. In 1942 the family relocated to Hollywood where the camera-ready kid blossomed at the speed of light – a Pantages usherette at the age of 13, she racked up a string of attention-grabbing gigs (talent shows, chorus lines) that led to a reign as Miss Eight Ball and the inevitable merger with Tinseltown’s preeminent lounge lizard, Howard Hughes.

That arrangement generated a distinctly higher-profile for the industrious starlet – from an eye-popping Alberto Vargas pinup to swivel-hipped walk-ons in a series of forgettable potboilers and finally a contract at Universal. A cheeky studio exec christened her “Mamie” thereby hijacking the name of President Eisenhower’s staunchly decorous wife and signaling a different kind of sex bomb was set to detonate on the horizon.

Predictably the studio cast her to type as a flirtatious waitress putting the come-hither on an equally green Tony Curtis in 1953’s All American, a gridiron soap opera directed by Jesse Hobbs – but rather than blasting off Van Doren merely coasted in a series of disheartening appearances as the third-billed harem girl or second fiddle to Francis the Talking Mule. 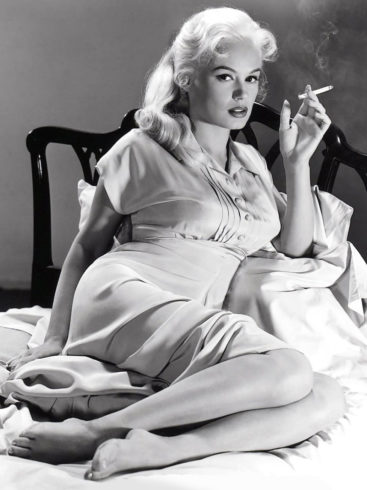 Rock and roll came to her rescue. In a country already rattled by H-Bombs and never ending racial strife she embodied a more intimate threat to America’s heartland, the atom age bad girl – this blonde was plutonium not platinum and she came equipped with an explosive soundtrack courtesy of Eddie Cochran in Untamed Youth and Jerry Lee Lewis in High School Confidential.

Kino Lorber has released a trio of her early appearances in the Mamie Van Doren Film Noir Collection and though the films represent Mamie’s lesser known efforts they flaunt irresistible titles – Vice Raid, Guns Girls and Gangsters and The Girl in Black Stockings. 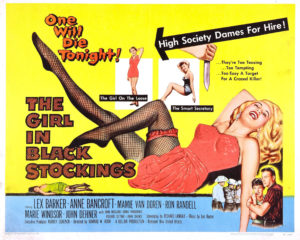 The bloodthirsty escapades of a mysterious killer in a remote Utah resort, Howard W. Koch’s absurdly entertaining The Girl in Black Stockings is a fast-food feast of red herrings and ham – newcomer Anne Bancroft keeps tripping over corpses, sheriff John Dehner plays cat and mouse with a carload of suspects and a paunchy post-Tarzan Lex Barker checks out the ladies from his honorary bachelor pad, a poolside lounge chair.

But it’s Ron Randell as a psychosomatic paralytic who has the lion’s share of screenwriter Richard Landau’s overripe speechifying including “I’d like to get so drunk I’d look in a mirror and spit at my own face!” and “My nose needs blowing!”

That dialogue is goosed by Koch’s surprisingly energetic direction while Les Baxter’s pseudo-Sirkian score is an amusingly overblown counterpoint to the pervasive sleaze. As the not so fresh-faced ingenue Mamie has a relatively small part but she’s far more at ease and charming than in her later films where it was clear the burden of a starring role was overtaxing her skill set. 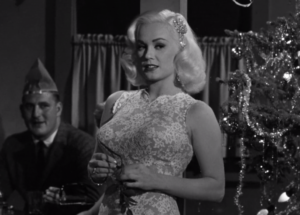 Edward Cahn was an assembly line auteur – not a man to shy away from stock footage and rat-a-tat narration that was as hard-boiled as it was half-baked. The first few minutes of 1959’s Guns Girls and Gangsters are fraught with those cost-cutting maneuvers giving its story of a yuletide heist gone wrong a distinctly Ed Woodsian vibe.

Van Doren is Vi Victor, a lounge singer with terrible taste in boyfriends (Lee Van Cleef scowling behind bars) and future boyfriends (Gerald Mohr, fresh out of the slammer and already plotting bigger and better crimes).

Both lurid and naive, the movie coasts on Robert Kent’s workman-like screenplay, a bit of pulp twaddle oddly suited to Cahn’s inelegant staging. Aside from an action-packed finale it’s the moment when Van Doren vamps a roadhouse audience while  bumping and grinding round the Christmas tree that really puts the “Oh!” in “O Tannenbaum.” 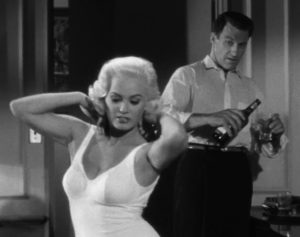 Fast on the heels of Guns Girls and Gangsters, Cahn’s Vice Raid tips its hand in the opening frames with a pan across a row of girlie magazines and a lecture about the Mann Act – a backhanded salute to the raincoat crowd who made up the majority of audience members.

With a script from one-shot wonder Charles Ellis, Vice Raid is an Eisenhower era update of pre-code melodramas that thrived in the early 30’s. Van Doren is a hooker sans heart of gold and Captain Video himself, Richard Coogan, is the true blue detective she helps frame – she’s unmoved by John Law till her little sister is brutally assaulted by a ruthless mobster and, like Bette Davis in Marked Woman, goes tit for tat with the bad guys.

Cahn’s staging has all the visual dynamics of a police line-up and, remarkably, his partner in crime is the great Stanley Cortez, masterful cinematographer of The Magnificent Ambersons and Night of the Hunter whose trademark style is mostly absent.

A stripped down, but budget conscious set, Kino’s transfers look terrific though the print for Girl in Black Stockings  shows some initial wear – the comparatively little seen Guns Girls and Gangsters and Vice Raid are nearly pristine. The set’s only extras are the theatrical trailers and a new interview with Mamie herself who cheerfully rifles through memories of her charmed life – the Last Sex Bomb Standing. 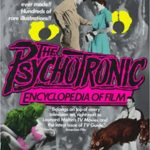 Michael Weldon’s indispensable Psychotronic Encyclopedia of Film (with his notes on The Beat Generation and other Van Doren films) is available here.