MGM’s show is a surprising powerhouse musical bio about the personality clash between an ambitious singer and the powerful enabler who wants her in his bed. Doris Day and James Cagney are at their best in an only slightly compromised telling of the real-life showbiz relationship of ‘twenties star Ruth Etting and the domineering mobster Martin Snyder. 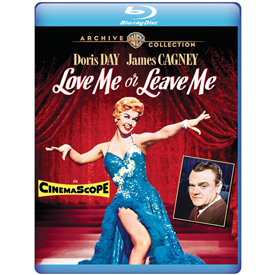 MGM’s early CinemaScope musical bio holds up extremely well, and is sufficiently adult to retain its interest as a drama. We’ve all seen musicals where beautiful performers are ‘sponsored’ by men that expect sexual favors. But how did arrangements like that work out in real life, and what happens when the singing star given a boost by a racketeer turns out to be a great talent? Does she deserve her success even if it was achieved through unfair means? In her first non-Warners picture, Doris Day is a dramatic success. She plays Ruth Etting, a real-life singer from the 1920s who got her start as the consort of a gangster, Martin Snyder. Under assured direction from Charles Vidor, Day strikes tense sparks as an ambitious performer clearly playing a dangerous game with James Cagney’s unscrupulous and unstable “manager.”

At the time Love Me or Leave Me was almost unique among musical bios. Instead of glossing over the rough spots in Ruth Etting’s rise to fame, it presents a complicated, unsavory relationship that reflects the way some people use each other in show biz. Doris Day submerges her Warners goody-goody image in the character of Etting, who when we meet her has already learned some practical career lessons. Although the film’s Ruth remains an upstanding and honorable character — this is still a 1950s movie, folks — enough hints come through to let us wonder if the boorish, manipulative gangster played by Cagney gave better than he got.

For once the studio makes a concerted effort to reproduce the period of the 1920s: the costumes and hairstyles aren’t too anachronistic, and an unbilled choreographer recreates some entertainingly authentic-looking stage routines. Mauled in a dime-a-dance joint, singer Ruth Etting (Doris Day) accepts the career help of Marty “The Gimp” Snyder (James Cagney), a hotheaded racketeer partial to threatening people when he doesn’t get his way. Ruth manages to control Marty’s frustrated attentions until radio success brings her to the Ziegfeld Follies in New York. Marty expresses his notion of love as a fanatic desire for control. He forces Ruth to withdraw from the show, at which point she breaks down, marries him and does whatever he says. But a Hollywood deal and a reunion with her old singing coach, pianist Johnny Alderman (Cameron Mitchell) brings Marty’s murderous jealousy back into the picture.

Although tame by today’s standards Love Me or Leave Me succeeds as a tense drama, a musical biography and a musical in its own right. Musical bios are often downright phony but this one makes for compelling viewing. The crude Snyder may torment Ruth Etting, but she can’t deny that she’s taking full advantage of his career ‘guidance.’ Marty at first is just trying to put Ruth under obligation, so he can take her to bed. But he’s soon too far gone on to resort to a direct rape, as he might with an ordinary bimbo. Marty is surprised to discover that audiences actually like Etting’s voice. He no longer needs to pay for their applause. The movie’s edge keeps us on edge because the relationship is basically unhealthy, and Cagney seems so prone to violence. There’s a parallel with the more extreme historical example of Paul Snider and Dorothy Stratten. The jealous Marty Snyder could well have killed Ruth Etting.

Viewers that expected another Doris Day apple-pie entertainment may have been disturbed by the adult complexities in Daniel Fuchs and Isobel Lennart’s script, but they must have enjoyed the many excellent musical numbers, a big step up from some of her previous work. The songs are well staged for the CinemaScope screen. “Shaking the Blues Away” is a stylish highlight that shows Day fully in command. When she descends a flight of stairs in a bright blue gown surrounded by men in top hats and tails, the camera seems to be in awe of her.

Of special note is Cameron Mitchell as the other man in Etting’s life. During the earlier, Hollywood portion of his career the versatile actor played a lot more than just second-string bad guys. His piano player-lover is both sensitive and restrained. And how many actors can make the claim that they were shot by Jimmy Cagney in a movie, out of jealousy?

James Cagney reins in his psychotic Cody Jarrott image, but still threatens to explode in many scenes. His frustrated hood defines self-importance by the number of people that dance to his tune. Cagney gives Marty Snyder enough finesse to convince us when he accepts Ruth’s refusals to sleep with him. It’s a credible ‘rough’ relationship, which perhaps cheats a bit… is it too cynical to think that the real Ruth Etting may have planned for her benefactor to get himself wrapped around her finger?

The only story gear-change that the film flubs is the abrupt marriage scene … it’s unclear exactly why Etting gives in, especially after her revulsion at Martin’s clumsy attempts to kiss her. Films in 1955 just weren’t allowed to touch on sexual realities, such as the fact that the historical Martin Snyder was married when he met Ruth Etting, and left one woman to marry the other. Was the Production Code (or Doris Day) against the idea of Day playing an adulteress? Any rational reading of the situation causes us to wonder if Etting had been sleeping with Marty since near the beginning. Sexual compatibility may have been the only functioning part of their relationship, with the fireworks and abuse really focused on a fight for control of her career. This kind of sordid tension points the way to later dysfunctional ‘romances’ in films by Martin Scorsese. It’s not difficult to imagine a harrowing Raging Bull- inflected version of this story, with the relationship between Ruth and the Gimp far more abusive and profane.

MGM’s version of events is just tough enough to make this Doris Day and James Cagney picture a career highlight for each. It won an Oscar for best screen story; Cagney was nominated for best actor, Percy Faith and George Stoll for best scoring, and more nods came for best sound recording and best original song, “I’ll Never Stop Loving You.” 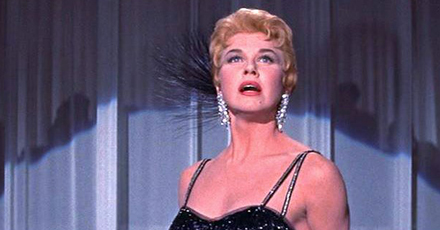 The Warner Archive Collection Blu-ray of Love Me or Leave Me is an excellent choice for an upgrade to HD. The new transfer has brighter colors and a much sharper image than the old DVD, which helps when so many visuals are filmed in wide shots. To avoid the ‘CinemaScope mumps,’ two-shots are filmed with longer lenses, which often results in only one actor being in focus, even though they’re standing right next to each other. These visual drawbacks were neutralized when audiences saw these pictures on giant screens, spreading wide across their field of vision.

The extras this time give us a chance to compare Doris Day with the real Ruth Etting. Two early Vitaphone musical short subjects show Etting singing and acting in a style with little similarity to Day’s. Her voice is charming but perhaps better suited to the radio; her acting is just terrible. One of the short films features an incredibly young Brian Donlevy. A third item is a lengthy exhibitor’s promo touting upcoming 1955 product, with a number of stars talking to the camera. We see Charles Vidor and his cast briefly on the set of this film. A trailer is included as well.

I’m not entirely certain, but the extras looked so good, I think they may be native HD, not bump-ups from standard DVD quality. For some reason the subtitles are in ALL CAPS, but we’re glad they’re included.

A welcome Note from Brendan Carroll, 8.20.16:
Hi Glenn, I enjoyed your review very much of this, one of my favourite musical bios. A few points you may find interesting:
1. Ruth Etting was still alive when this was made and she was sort of a consultant on the production, much as Billie Burke had been on The Great Ziegfeld in 1936. Etting may have insisted that some things were changed and/or sanitised.
2. The scene where Ruth finally gives in to Snyder was originally much longer and rougher and implied that he raped her. I suppose the Code insisted on the early fade out.
3. It was Cagney who insisted that Doris Day be cast. The film was originally supposed to star Judy Garland but she declined (wow, imagine what she might have done with it and how she would have acted with Cagney!)
4. The song which won the Academy Award borrows its melody from the famous Dambusters March by Eric Coates (it simply slows down the tune!)
Best always — Brendan Carroll (In the UK)