Welcome to the final film of the aesthetically precise, rigorously austere Robert Bresson, an adaptation of a fateful tale by Leo Tolstoy visualized in Bresson’s frequently maddening personal style. An extreme artist makes a fascinatingly unyielding show: as with the classic paintings that Bresson admires, appreciation requires special knowledge. 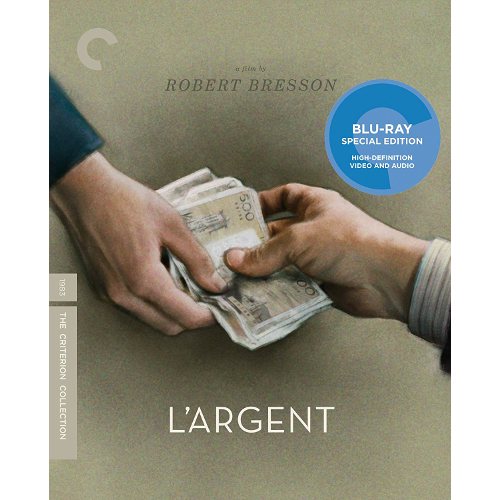 Some movies need disclaimers, and many of the pictures of Robert Bresson could use a caption reading, ‘not for beginners.’ Bresson’s filmography includes the spiritually mysterious Diary of a Country Priest and Au Hasard Balthasar, the incomparable thriller A Man Escaped, and the film to perhaps best take in his unique ideas about cinema and narrative, Pickpocket. ‘Austere’ doesn’t quite sum up the man’s singular approach. Without extreme content of any kind, he’s made some of the most disturbing pictures than can be called High Art. Toward the end of his career his films became even more uncompromising.

Robert Bresson’s final feature L’argent is yet another of his cold examinations of the inescapable downside of human relations; for someone noted for inspirational works that examine man’s struggle with his spiritual instincts, this is one pessimistic filmmaker. Bresson uses a short story from Tolstoy to launch a meditation on the evil that men do. 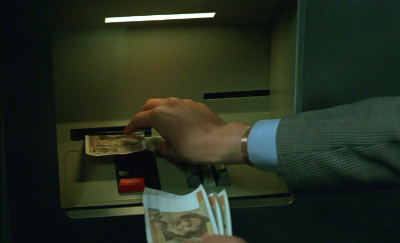 This is genuine film art by a filmmaker determined to control every element seen on the screen. The starting point for understanding is that in Bresson’s view, normal commercial films are not real cinema. The narrative here is as dry as can be imagined. Owing money to his school friends, a boy passes a counterfeit note in a photography studio. The storekeeper decides to pass it on to an innocent deliveryman Yvon Targe (Christian Patey). When Yvon is arrested the storekeeper and his two sales associates deny the transaction ever took place. Disgusted, Yvon takes part in a crime and is sent to jail for three years, leading to the end of his family. One of the sales associates in the photography studio contemptuously robs the storekeeper after being dismissed for petty theft, and ends up in the same prison as Yvon. By the time Yvon comes out of jail he no longer has any respect for human life.

L’Argent begins as if it will be a movie with a La ronde– like structure, where a weapon or a suit of clothes (Tales of Manhattan) changes the fortunes of those who inherit it. A counterfeit bill is passed about leaving a wake of corruption wherever it goes. But this faux banknote changes hands only twice before Bresson’s script stops to note the moral decay among all who come in contact with it. It’s more like a fast-track version of the ‘trap of fate’ storyline as seen in a film noir like Quicksand. Step by step, a small infraction snowballs into larger crimes until the hero is fighting for his life. L’argent is much darker than that – greed and selfishness ruin a man’s life, but the show infers that money itself is an agent of evil. 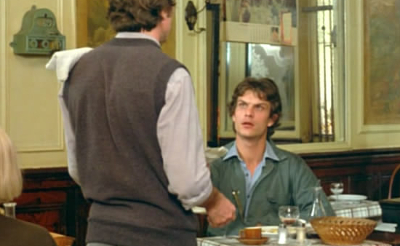 It’s all bad news, as if the ‘evil’ money is an enemy of humanity. A schoolboy learns that his parents will cover for his crime and that he can sneer at the woman he’s cheated. The first wronged party sees nothing wrong with passing his problem onto an innocent third party, whose reputation he destroys. A store clerk with rebellious instincts will derive from his employer’s selfishness the motivation to commit a much larger crime.

Worst of all, a decent family is utterly destroyed. Too proud to defend himself to his employers, the deliveryman Yvon turns to crime as well. His wife and child are left vulnerable. In response to society’s indifference to the injustice he suffers, Yvon becomes a mass murderer. 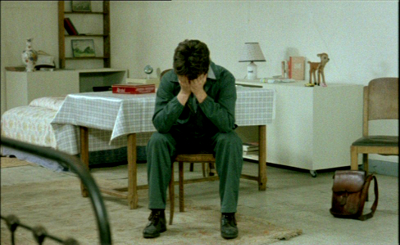 Bresson’s simple approach to his material reduces the drama to a series of arrivals and departures, doors and barriers, messages, letters refused and legal summons. Everything is observed at a slight distance imposed by the narrow lens; it’s as if we were observing the actions of microbes in a laboratory. The acting is muted and undemonstrative; Bresson didn’t believe in a cinema that showcases personalities. Ellipsis is used to skip major events and important action often happens just off-screen: a showdown during a robbery, a prison escape heard only through a cell door. We’re invited to judge what we see but to keep our emotions at a slight remove. The savagery of a concluding bloodbath is only hinted at by several short cuts of murderous details and shivering victims.

We follow Bresson’s narrative but I’m not sure we need agree with his general thesis. The movie’s title and original key artwork (a cartoon of a French banknote turned into a devouring monster) again point to money as the root of all this evil. But L’argent is still a fictional narrative as confected as the ‘trick’ storyline of a show like Quicksand. It’s just as easy to say that Bresson has chosen a rotten group of characters. Everyone in this particular human chain acts out of immediate personal expediency with no regard to social responsibility. Parents ignore their children until it becomes necessary to cover up their mistakes. The money hardly seems the issue, as these people were surely behaving badly long before the counterfeit bills started moving. The shopkeeper is a crook plain and simple. His dishonest employee already believed in a philosophy of criminal anarchy. Our upstanding victim, the delivery man Yvon, already has criminal acquaintances. Man, not money, is the root of all evil and L’Argent deals only with consequences and not causes. 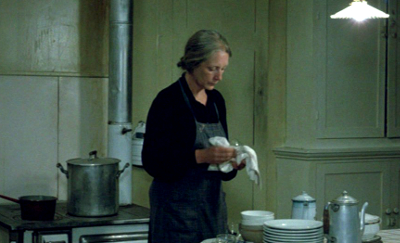 What L’Argent really shows is that immorality flows between humans like ripples on a pond. Unable to recover his loss, the first thing a victim of cheating wants to do is pass the loss to someone else. The employee thinks that because his boss cheats, he should be able to. Yvon reasons that if his reputation is damaged he has the right to live up to his new label as a thief. Where the dominoes break down is the idea that a wronged, hurt man locked in prison will as a philosophical reaction turn into a conscienceless mass murderer. This reviewer doesn’t believe that crime works that way.  Yvon has nobody to blame but himself for some of the injuries he suffers.  If he goes insane he may have been teetering on the brink anyway. Is Bresson is saying that we’re all just a tragic injustice or two away from anarchic lawlessness?  A case could be made for that idea, but this isn’t it.

It’s tempting to reject the thesis of L’Argent based on its unrelieved pessimism. The only positive influence is the wise counsel of Yvon’s cellmate, who tries to get him to give up ideas of revenge. Other than that we scarcely see anyone behaving with love or even kindness. Yvon’s suffering wife has little contact with her husband. Yvon never has the opportunity to tell his entire story to a single sympathetic ear. Life can be bleak but Bresson wants to blot out the possibility of goodness, as indicated by his abrupt, frustratingly downbeat ending. 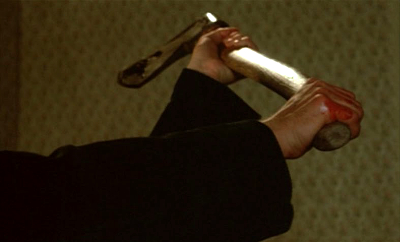 Just the same, L’argent’s rigid determinism and carefully suppressed performances can grow on one. There are few distractions from the issue at hand. Bresson plays much better as a cinema theorist, and this show is no less fascinating to discuss than any of his previous movies. Which parts of his theory work and which do not? Does his neutral approach to drama really bring us closer to his thesis? Critic Michel Ciment is right when he says that L’argent is never dull, and in fact is always making exactly the impression Bresson wants it too, even details like the sound that metal makes scraping on brick, or the crunching sound of a woman chewing nuts. Bresson is never pretentious or fussy, and he doesn’t clutter up his images. He may be the most selective, precise filmmaker ever.

The Criterion Collection’s Blu-ray of L’argent is the expected picture-perfect encoding of Robert Bresson’s consistently rigorous film, the last in his remarkably consistent career. The image is excellent in every respect. The all-important soundtrack is sharp and clear. New Yorker films put out a rather good DVD in 2005 but this is better.

Criterion has released a number of Bresson pictures on Blu-ray, and the best general key-source interviews with Bresson in which he professes his theories of film have already been used. For this release disc producer Elizabeth Pauker found one more key-source item and commissioned a new featurette. From 1983 and the Cannes Film festival is a half-hour after-screening Q&A session with Bresson on the dais with his lead actor, Christian Patey. At first we think that Bresson is going to give cryptic answers, but he’s soon doing his best to respond to questions. Some of the people asking the questions reveal open doubt and even derision. James Quandt’s 50-minute video essay analysis demonstrates how Bresson overlaps sound and uses it to express events he doesn’t show. It also traces the picture’s visual themes back to classical paintings, an analysis that makes good sense when one realizes that Bresson’s film does appear to mimic the stasis of the paintings. His direction reduces actions to minimums, with people standing still and reading their lines in a flat monotone. 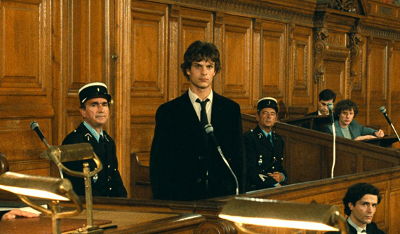 The forty-page insert booklet has another critical essay by Adrian Martin, and a newly expanded 1983 interview with Bresson by Michel Ciment in which they discuss his style at length, and how it developed as he moved from B&W to color. Bresson also discusses his proposed Genesis film, which was never made.

We’re told that the very short, effective original trailer is simply a montage dropped from the film, which shows cash being withdrawn from early ATM machines. It’s so abrupt, French viewers that knew the director’s work must have thought it quite funny – now what is Bresson up to?