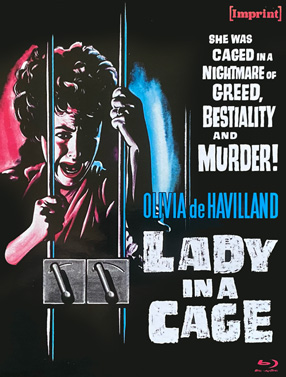 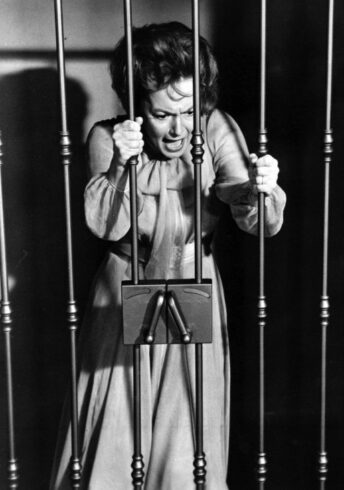 Though the title suggests anything from a feminist manifesto to a women-in-prison melodrama, Lady in a Cage is in fact a home invasion thriller with a mile-wide mean streak. Critics in 1964 saw the film itself as the intruder, a smash and grab aberration wallowing in bloodshed and perversion. In The New York Times, Bosley Crowther labeled it as “reprehensible.” Gossipmonger Hedda Hopper wailed, “The picture should be burned.” Chances are good the reaction to Walter Grauman’s claustrophobic shocker would have been far less shrill without the presence of its leading lady, Olivia de Havilland—according to Hollywood taste-makers, Maid Marian should not be consorting with such riffraff.

De Havilland plays Cornelia Hilyard, a ripely beautiful dowager who lives in a spacious if drably generic house in an unnamed city. The widowed Cornelia’s only companion is her long suffering son Malcolm who serves as combination butler, cook, and nursemaid. Cornelia’s domineering nature has only gotten worse since her hip surgery—she uses a home elevator to travel between the first and second floors but she’s more interested in riding Malcolm. “Mother darling”, as her son calls her, is like a more benign Violet Venable and Malcolm has had it, he’s preparing for a short vacation and has no intention of coming back. The sound of the door slamming when he leaves may be the last she will hear from her son or anyone else—as soon as he’s gone the elevator comes to a screeching halt high above the living room, stranding Cordelia cheek to cheek with the chandelier. All she can do is lean on the alarm and wait. 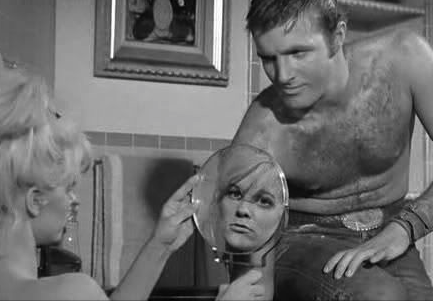 She won’t have to wait long; Cordelia’s modestly swellegant home is incongruously situated in a low-rent neighborhood (exteriors were filmed in the formerly monied confines of Westlake Park in Los Angeles) and the block is host to a parade of suspicious passersby—bottomfeeders like George Brady, a tongue-wagging wino and religious fanatic played by Jeff Corey. Brady is trolling the alley for leftovers when he hears Cordelia’s alarm—which he interprets as a dinner bell—a few broken windows and voila, Cordelia’s wine cellar and refrigerator are his for the taking. Things go to hell in a hand basket from there—Brady is joined by his occasional partner in crime, a blousy hustler played by Ann Sothern, and a trio of stereotypical sickos: Essie is an itchy little psycho played by Rafael Campos, Elaine, resembling one of Jean Rollin’s vampiric waifs, is played by Jennifer Billingsley, and Randall Simpson O’Connell, a homicidal loon with a hair trigger, is played by James Caan in his first film role. 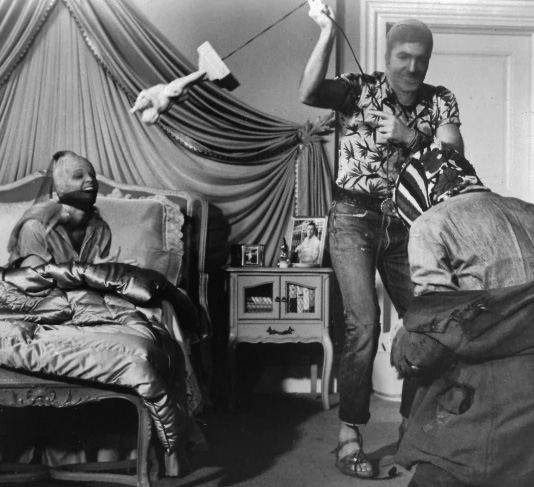 Lowlifes like that gruesome threesome ruled the newsstands of 1964—Manhunt, True Detective, and a boatload of other Penny dreadfuls, promoted sweaty malcontents just like O’Connell—the stocking mask he wears while ransacking Cordelia’s bedroom was a standard disguise for the creeps on those magazine covers—de rigueur for the well-dressed degenerate. Along with giving fashion tips to demented prowlers, those rags were manufactured to unsettle nervous housewives while turning on the man of the house—but the villains of Lady in a Cage would scare the pants off any target audience; they’re equal opportunity sadists and Grauman had plenty of experience with their kind; the 42 year-old director built his reputation on cops and robbers shows like Naked City, Peter Gunn, and The Untouchables—a production famously at loggerheads with standard and practices.

Grauman specialized in sidestepping censors by filming gangland violence in the most oblique fashion—which somehow made it seem more barbaric; in 90 Proof Dame, an Untouchables episode from 1962, an unlucky racketeer is discreetly pushed out of camera view followed by a mobster clutching a broken wine bottle. Grauman uses the same trick in Lady in a Cage; the murder of one character takes place behind a couch but the slashing blade is clearly visible, accompanied by bloodcurdling screams and body-piercing sound effects straight out of Psycho (the film has its own Herrmannesque composer; Paul Glass, mainly known for his modernistic orchestral work, also specialized in thrillers with a schizoid bent like Bunny Lake is Missing.) 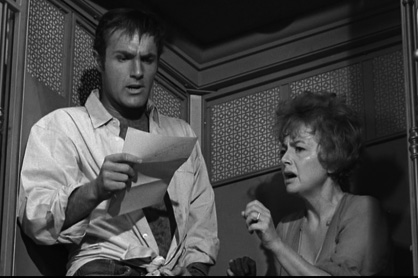 The intimations of sex are equally teasing and somehow just as sordid—scenes of the strapping young Caan drooling over the bosomy de Havilland threaten to collapse into an orgy of sex and violence that those crime magazines only hinted at. And sometimes Grauman goes for the gusto—Caan’s fate is an awkwardly staged but gruesome comeuppance that gives popcorn munchers in the balcony something to cheer about. Like Paul Verhoeven’s whole-hearted embrace of the same unsavory material, the film doesn’t come with a coda lecturing the audience to support the library or floss their teeth—it’s refreshingly moral-free. But unlike Verhoeven, there’s no bad-boy fun in Grauman’s style; he just saw his duty and did it, supplying respectable neighborhood theaters with sanitized versions of the roughies on 42nd street.

Viavision [Imprint]’s new Blu ray presents an excellent transfer of Lee Garmes’s vivid black and white cinematography while putting Grauman’s walk on the sleazy side in its proper context thanks to two new commentaries—one from film critics Kim Newman and Barry Forshaw and the other from film critic Kat Ellinger. Also included is a so-called “video essay” from Chris O’Neill juxtaposing contemporaneous commentary with images from the film. The original theatrical trailer wraps up an excellent presentation from this Australian home video company. And it’s region free, to boot—have at it, thrill seekers.

And here’s Darren Bousman on Lady in a Cage: