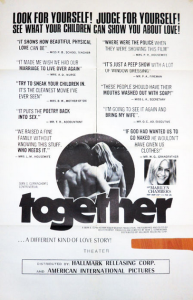 Surmising that “we all have a need to go naked,” bearded Dr. Roland Curry takes us through his isolated estate full of free‑swinging, photogenic young people leading an idyllic life of sexual abandon. Such things as masturbation and oral sex are “encouraged” as ways of finding the sexual feeling and fulfillment that unfortunate outsiders miss out on. Together (which it isn’t) purports to be a documentary about the doctor’s good works and how they could help you, if only you were lucky enough to be there with all those willing young bodies—but what it really is, is a poorly-made softcore sexploiter which continually promises more than it delivers.

Voyeur trades will grumble at the minimal explicitness and abundance of presumably arty dissolves, glints and out‑of‑focus shots, but the several lithe nudes on view will be sufficient to pull them in, at least initially, in metropolitan sex markets. Prospects are somewhat better for those suburban markets where the really heavy stuff is taboo, since for the most part Together consists of pretty, empty‑headed girls babbling about how sex is so‑o‑o beautiful, turning cartwheels, playing leapfrog, swimming nude, etc. Technically, it doesn’t even reach the intended hair spray commercial level; home movie camerawork, inept editing and poor color mark it as the amateurish project it undoubtedly is.

[Together was edited, associate produced and partially photographed by Wes Craven. Though a Hallmark Releasing title, the film’s pressbook credits its release to American International Pictures. —TL]