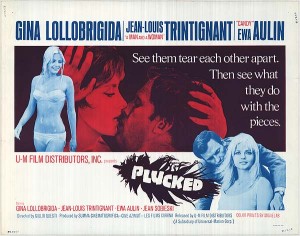 Although it doesn’t quite fulfill the odd promise of its marquee billing (“Gina Lollobrigida‑Plucked”), this bizarre, fragmented film probably qualifies as the weirdest picture of the year, and one which may delight buffs who enjoy spotting genuine curiosities. Made in 1967 under the title A Curious Way to Love, the Italian‑French co‑production is a continually interesting, occasionally bewildering mixture of sexual perversion, murder, social comment, science fiction and sheer absurdity, which could combine with its exploitable new title to stir up some boxoffice activity in dual bill and drive‑in situations. 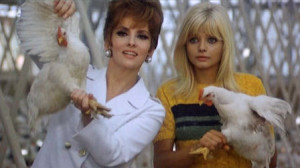 The names of Gina Lollobrigida, Jean‑Louis Trintignant and Ewa Aulin assure the U‑M Film Distributors release some recognition in art‑sex marts. Giulio Questi and Franco Arcalli’s screenplay opens with Trintignant, wealthy owner of a modern automated chicken breeding farm, acting out a ritualistic psychosexual throat‑slitting fantasy with a prostitute at the local motel. At home, he has lost affection for his still‑shapely wife, Miss Lollobrigida, and lavishes his more mundane sexual attentions on her sexy young niece, Miss Aulin. Secretly in love with ambitious young engineer lean Sobieski, Miss Aulin pretends to go along with Trintignant’s plan to kill Miss Lollobrigida by pushing her into his giant grain-crushing machine, while plotting with Sobieski to dispatch both of them and take over the chicken business.

All this is played against a background of worker hostility against the new machinery, Miss Lollobrigida’s lesbian attraction to Miss Aulin, and a strange subplot in which a radioactive accident creates mutated, pulsing, headless and wingless chickens, which Trintignant denounces as monstrous and destroys—much to the horror of the chicken growers association, which is thrilled with the economic possibilities. Finally, Sobieski murders Miss Lollobrigida hoping to pin it on Trintignant, who finds the body and tries to dispose of it, but falls into his gnashing grain machine and is converted into chicken feed. The police arrest Sobieski and Miss Aulin for murder. Inundating these extraordinary goings‑on is the appropriate edginess of Bruno Madera’s discordant music score, which sounds at times like demolition at a piano factory. 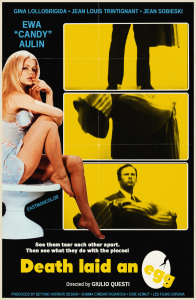 Dario DiPalma’s Eastman Color photography is imaginative, while Giulio Questi’s elliptical direction is uneven, stylized, and entirely in keeping with the disconcerting mood. He manages to build up several intriguing sequences through adept cross‑cutting, such as the opening “murder” scene and Miss Aulin’s memories of her parents’ auto accident.

The picture has been badly served by some inept dubbing (in one shot, Trintignant’s voice continues on the track long after he’s finished speaking, and right over the image of Miss Aulin mouthing a line no one bothered to dub in!), and the removal of 15 minutes hasn’t helped its overall coherence any (it’s unlikely the picture originally ended as abruptly as it does in the present version). Still and all, a strange item which will fascinate some and baffle many.