Highly exploitable thriller about two‑headed killer on the loose. Has big potential as a novelty item for horror‑ballyhoo situations. Rating: GP. 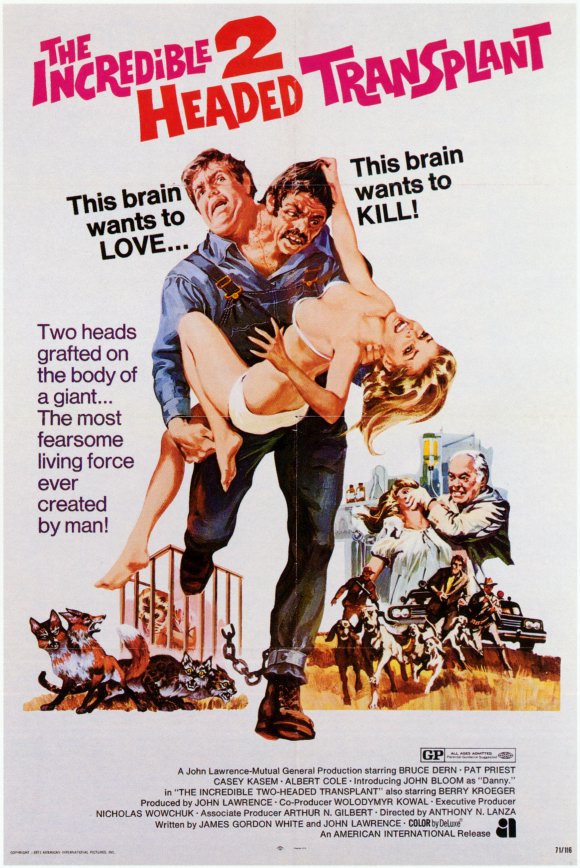 The old saying that two heads are better than one is effectively disproved in The Incredible Two-Headed Transplant as the addition of an extra head brings nothing but grief to the hapless title character. Sometimes his right head doesn’t know what his left head is doing, so he finds himself on a murder spree even though half of him is a good guy. This exploitably oddball AIP release is fast‑moving, neatly if modestly produced, and unusual enough to hold outstanding potential as a novelty attraction for the horror‑ballyhoo markets. Director Anthony N. Lanza sustains the two-headed illusion remarkably well, unlike a previous papier-mâché effort called The Manster.

By shooting from all the right angles and cutting away at the correct moment, it actually appears that two heads are perched on the same body. The screenplay by James Gordon White and John Lawrence is on the ridiculous side, obviously, but it’s quite amusing all the same. Wild‑eyed scientist Bruce Dern is busy with experiments involving the grafting of additional heads on the bodies of animals, the scientific value of which remains elusive despite his earnest explanations. Dern is forced to shotgun killer‑rapist Albert Cole when he makes off with Dern’s wife Pat Priest during his flight from a mental hospital. Fellow scientist Berry Kroeger persuades Dern to transplant Cole’s head to the body of hulking, dim-witted but harmless handyman John Bloom. 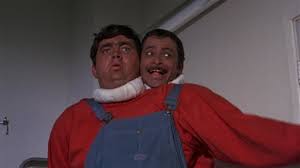 The result, a sequence in which both heads wake up on the same body and talk to each other, is priceless. Under the influence of Cole’s evil head, the two‑headed Bloom/Cole goes on the rampage, killing a necking couple and wiping out two cycle bums and their girl. Finally Dern, Kroeger, and family friend Casey Kasem corner Bloom/Cole in a mine shaft where he has taken Miss Priest. A cave‑in buries all but Miss Priest and Kasem, who philosophizes, “Too much imagination can destroy a man.” Bright color, snappy editing and a pretty good music score by John Barber keep things moving, while Dern contributes another interestingly naturalistic performance in a stock role. Cole grimaces and mugs hysterically as the psycho. A campy ’40s‑style song wells up now and again, appropriately titled “It’s Incredible”—which, of course, it most certainly is.

The Incredible Two-Headed Transplant‘s TV history is even more interesting: years after being included as part of the last AIP-TV package, it turned up on Atlanta superstation TBS in a grainy, black-and-white version. Within the past few months, the movie has resurfaced on premium cable stations in a far more explicitly violent edition—the latest of MGM’s surprise restorations of a butchered-for-release AIP product!