Zombies menace islanders in dull, inept black-and-white mini-budgeter. Properly duelled, it will get by in lower class ballyhoo markets and drive-ins. Rating: GP. 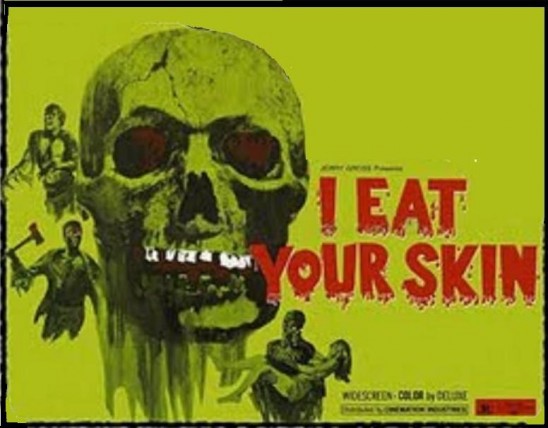 It’s hard to tell the zombies without a scorecard in I EAT YOUR SKIN, a black-and-white voodoo horror cheapie out of the bottom of the formula programmer barrel. Between endless bouts of tribal dancing, some crusty-looking native monsters stalk around the Florida locations looking believably dead, but the humans in the cast are so wooden there’s not much contrast. None of the gore promised in the title ever materializes, and no skin gets eaten, either. Where doubled with I DRINK YOUR BLOOD, this vapid Cinemation Industries release should perform satisfactorily in lower class ballyhoo markets and drive-ins on the title combination alone.

Writer-producer-director Del Tenney (CURSE OF THE LIVING CORPSE) wrings the last drop of boredom from the cliché-ridden proceedings, the sort that Sam Katzman and even television gave up on, 15 years ago. On a remote Caribbean island, playboy-writer William Joyce encounters kindly but mad scientist Robert Stanton, whose search for a cancer cure has led him to invent zombie fluid instead. When injected into the hapless native population, the radioactive snake venom formula induces a state of living death which is fully shared by the audience. Plantation overseer Walter Coy plots to use the zombies as an invulnerable army with which to take over the world, no less. 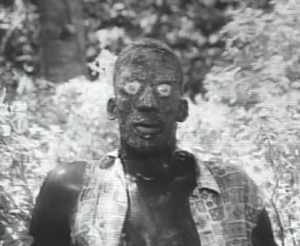 Joyce saves the doctor’s daughter, Heather Hewitt, from becoming the natives’ blonde virgin sacrifice and thwarts Coy’s megalomaniacal plans by getting away with the girl just before the island blows up and sinks into the ocean. The whole affair is about as lively as if the zombies had filmed it themselves, with all potential for fun, let alone horror, relentlessly crushed beneath tons of stupefying talk. Performances are inept, to put it charitably, and so are the monster makeups. It’s enough to make one recall the old Monogram zombie epics with something akin to fondness.

[Editor’s Note: I EAT YOUR SKIN was produced under the title ZOMBIES in 1964 and remained unreleased till its 1970 retitling/pairing WITH I DRINK YOUR BLOOD. I EAT YOUR SKIN is actually a shorter, less explicit version of ZOMBIES, which has been broadcast uncut on American television. It is also known under the title VOODOO BLOODBATH. —TL]