Routine horror‑plus sex entry has student scientist turning others into monsters. Slow, but neat title, some nudity and youth angles give it booking potential for ballyhoo spots, drive‑ins. Rating: R. 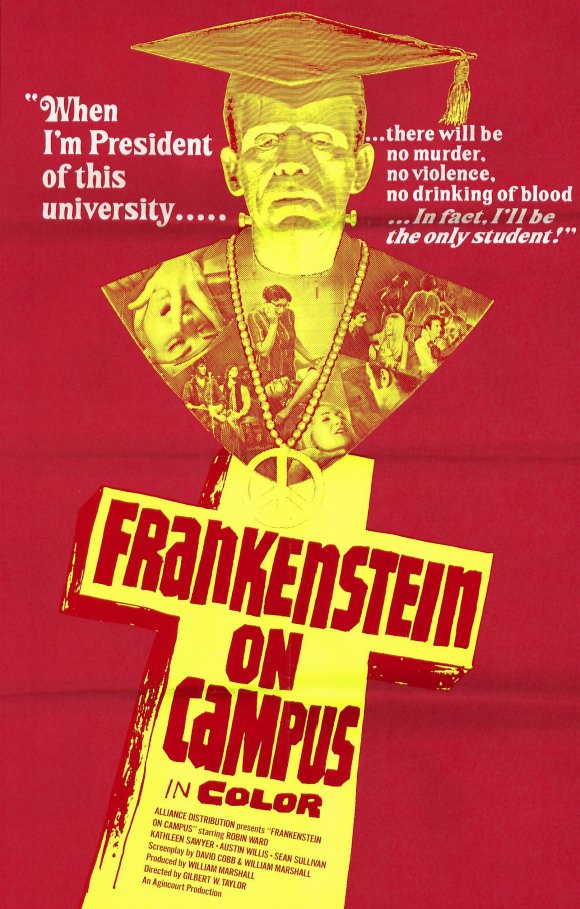 This Canadian‑made Medford Films release stacks up as a nifty idea flattened in execution. Nevertheless, strong ballyhoo and the intriguing title should enable Dr. Frankenstein on Campus to perform satisfactorily in appropriate dualler situations. Originally titled Flick and partly underwritten by the Canadian Film Development Corp., this modest affair has moments of interest but, on the whole, is slow‑paced and talky, most of the action taking place during the last reel. Intentions of the screenplay by David Cobb, producer Bill Marshall and director Gilbert W. Taylor are never really clear, and what at first seems about to develop into a bright contemporary updating of the Frankenstein theme soon falls into a routine youth‑horror groove.

Robin Ward looks the part as young Victor Frankenstein, an intense, aristocratic university student whose mad‑doctor scientific zeal is matched only by his resentment of his movie‑monster name. In between makeout sessions with occasionally naked co‑ed Kathleen Sawyer, he studies brains with sympathetic professor Sean Sullivan, and the other students generally regard him as a weirdo. After long digressions involving student protests over the school’s new computer (a favorite film subject this year [1970]), Victor turns three student revolutionary types into remote‑control zombies by implanting electronic pellets in their heads. He sends his star monster, Ty Haller, out to kill the two school newspaper reporters who got him booted out of school (again) by printing a photo of him holding a joint at a marijuana party. 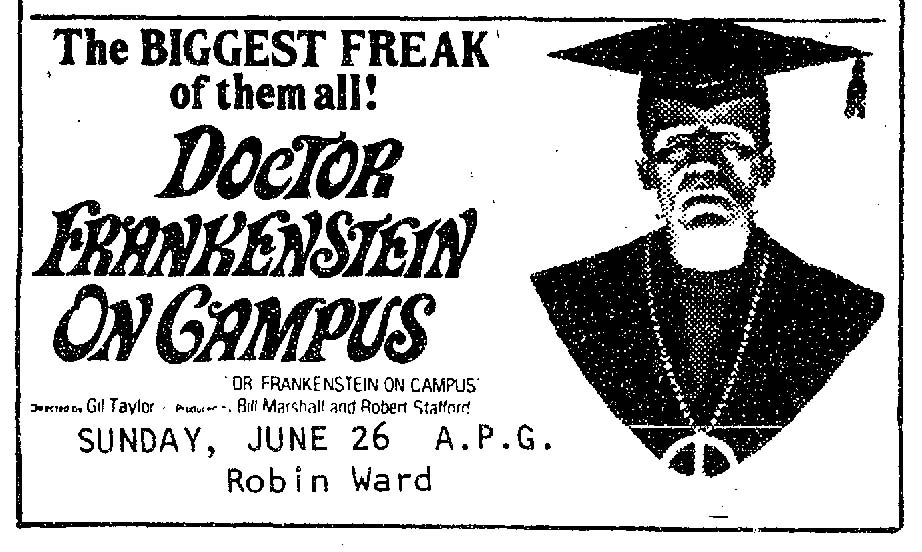 A few murders later, Victor falls from the high stairwell of a local art museum, pushed by his very own creation. It turns out that Victor himself is really the hem-stitched monster of old, created by professor Sullivan, the real Frankenstein, who exhibits that creative gleam in his eye once again at the fadout. The picture could stand to lose about 10 minutes, especially in the repetitive party and long‑winded dialogue scenes. There are a few nice story touches and instances of directorial creativity to enliven the generally humdrum atmosphere, but for the most part, it’s all pretty straightforward programmer stuff which missed its chance at a clever, offbeat addition to the increasingly formulized Frankenstein saga. Rock music by The Lighthouse is just fair.

Thanks to John Charles for the swell Dr. Frankenstein ad mat, featured on his terrific “By John Charles” movie blog.