An amazing talent gone way too soon, Janis Joplin is more than her boozy, brash public image. This bio docu has the personal background and the insights of those her knew, plus the Texas and San Francisco context in the Rock breakout of the late 1960s. 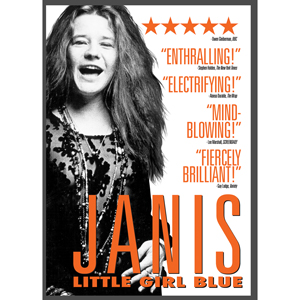 Janis: Little Girl Blue is an entertaining and emotionally affecting bio-film about the noted singer and songwriter, whose rise to fame in the San Francisco scene of the late ’60s is a tale of rock tragedy. In 1966 she’s singing in clubs, but after Monterey she hits the scene hard with the band Big Brother and the Holding Company. She also performs at Woodstock. Barely a year later, after some personal and career problems, she dies at age 27, of a drug overdose. A legend after barely three and half years in the limelight, Janis was lumped together with Jimi Hendrix and Jim Morrison as a casualty of the drug generation.

Seen from the outside Joplin has always been an imposing character — the image of the boozy, unrestrained and intensely honest Joplin performing was just the front of a life barely in control once she became a popular performer. Little Girl Blue has the access to the film, the interviewees and the vintage clips to tell her story well, and Amy J. Berg and producer Alex Gibney make excellent choices along the way. 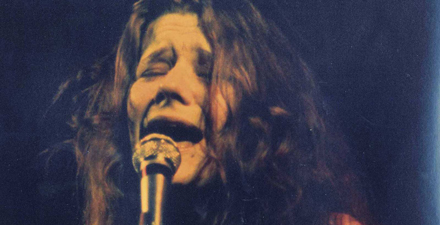 Joplin’s story begins with her upbringing in Port Arthur, Texas, where she was a rebel and an outsider, an exuberant and forceful young woman persecuted in high school. She first goes to Austin and then to San Francisco. She likes what she sees of the music scene but encounters problems with drugs. After a trip home to regroup, Janis takes off again and doesn’t look back. Sympathetic testimony from her brother and sister speaks well for the honesty of her ambitions. Her letters (read by performer Cat Power) attest to her innocence, as she writes home to apologize, explain her reasons and express her doubts. Joplin put her fears and sadness into these letters. The photos and film clips show a medium sized woman with a hard face that turns open and friendly when she smiles. Her candor in clips and interviews is also impressive. She opens up quite a bit to Dick Cavett, who was apparently quite taken with her… or at least, in his new interview, he likes to think that they had a meaningful connection. A clip is shown from a TV variety show appearance hosted by Get Smart’s Don Adams. He asks a question that could be answered with a flip sound bite about ‘feeling groovy’. Janis instead shoots back a sincere description of why she loves to perform. Adams, bless him, responds well.

The docu doesn’t scrimp on what had to be pricey clips. We see Janis recording her album Cheap Thrills and performing at the Monterey Pop Festival, where she famously impressed the hell out of everyone, with Cass Elliot on screen, agog. Filmmaker D.A. Pennebaker speaks about his filming of Joplin. The sequence also gets into the power politics that took place at the festival, with performers asked to sign off about being put in a movie that was invented on the spot. Most accounts of the ’60s music scene tout Monterey as the ‘free and open’ festival where the music business didn’t interfere, but apparently that wasn’t the case at all. 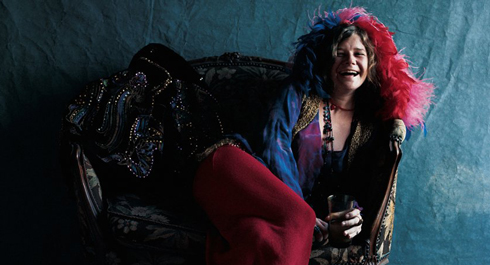 The docu gives us the delighted performer but also a woman with mood swings, who could become despondent over not having a loving partner. She’s quoted as saying that the boys in the band go home with someone every night but she goes home alone. The docu mentions her drug habit to some degree, and she talks about the need to get clean; it doesn’t talk much about her sexuality. Her reported female close friend and drug enabler is barely mentioned, but the fact that she had taken heroin before performing at Woodstock is.

The timeline gets a little crowded toward the end. Joplin has problems with Big Brother and a lack of success with the bands that follow them. The members of Big Brother interviewed for the show are generous and self-effacing, saying that things began to go wrong when she got all the press attention. But they also say that they didn’t consider themselves the best of musicians, at least not at the beginning. Like all of the interviews, these accounts show an effort to get at the truth. The truth seems to be that Janis was a unique fireball of a personality who handled some aspects of her life much better than others. 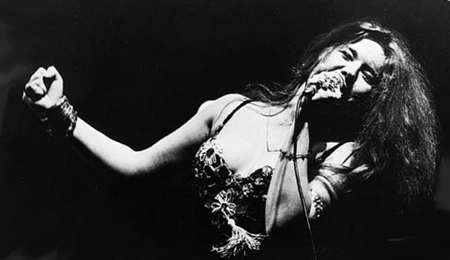 Joplin also has the time to go to Rio, meet a guy and tour South America with him. The docu sets him up to be a possible Mr. Right, had things gone well. He left her because of the drugs but they were supposedly getting back together. With Kris Kristofferson’s song “Me and Bobby McGee” Joplin was convinced she was onto a solid solo career. To its credit, the docu doesn’t overplay the tragedy; the facts are sad enough and the signs of self-destructiveness were more than obvious. We know that Joplin achieved a phenomenal connection with her audiences. Little Girl Blue enhances the intimate human connection.

Producer Alex Gibney (Steve Jobs, The Man in the Machine; Going Clear, Scientology and the Prison of Belief) has helped give director Amy J. Berg what she needs — the movie does not lack for relevant film footage and the cooperation of the family (the Janis Joplin correspondence) puts the show over the top. The context is well expressed, with footage of Jimi Hendrix, Jerry Garcia, and Janis’ producers, managers and boyfriends. Film of Haight-Ashbury ‘in the day’ underscores Janis’ craving for company — to get out, to be with people. 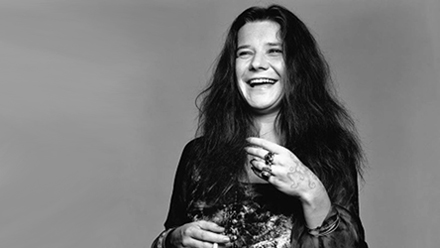 Filmrise-MVD’s DVD of Janis: Little Girl Blue is a fine encoding of this pleasing, emotionally involving docu. A Blu-ray is also available; I liked the audio as heard on this DVD, especially during the recording sessions for Cheap Thrills. Teenagers knew that album well, even kids like me who barely scratched the surface of rock music.

The extras include three excerpts of new footage not used in the docu. Big Brother sings Acapella in one clip, and discuss the differences between the performance halls the Avalon and the Fillmore West. Another piece discusses Janis’s influences. She loved Otis Redding, another performer gone too soon. Janis’s brother and sister attend her Hollywood Walk of Fame Ceremony in a fourth taped extra.