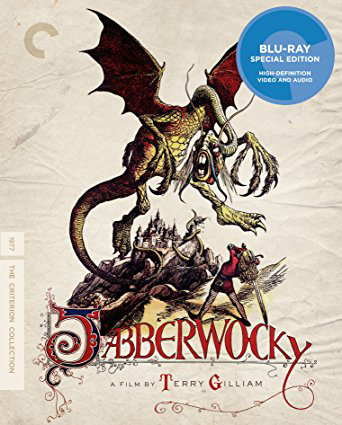 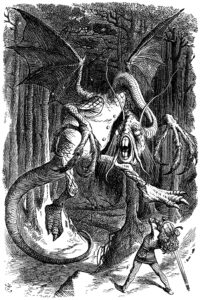 Equally appetizing was the thought of illustrator John Tenniel’s hideous creature brought to life by Gilliam, the Python’s premiere visual satirist. But Gilliam, working in a chaotic British climate that saw Harold Wilson being upstaged by the Sex Pistols, had other ideas, exemplified by the film’s title sequence which rolls by over some of Pieter Bruegel’s most unnerving canvasses.

The Dutch artist was no Pollyanna (his most famous painting was called The Triumph of Death in which skeletal armies parade through a desolate panorama of torture and carnage) and Gilliam, along with his production designer, Roy Smith, make sure to refer to the painter’s morbid landscapes in almost every frame of their 1977 ode to squalor and never ending misery.

Fresh-faced Pythonite Michael Palin is Dennis Cooper, the Candide-like innocent of an undetermined medieval era, who sets off to find his fortune and instead discovers rampant poverty, boundless ignorance and a pestilent dragon. The beast remains offscreen until the film’s climax but its presence is keenly felt; swooping down on unsuspecting travelers, it leaves in its wake neatly denuded skeletons with the corpse’s head left fully intact. Considering the abject suffering of the populace, the monster might be performing a service as the Jack Kevorkian of fairy tale creatures.

Through a series of misunderstandings the slow-witted Dennis becomes attached to the knight charged with slaying the Jabberwocky. And in time-honored Chaplinesque fashion, once the timid squire comes face to beak with the dragon, he stumbles into doing the job himself. After slogging with our hero for an increasingly unfunny 80 minutes, the climactic showdown with the winged creature can only be described as a wretched disappointment. The appearance of the Jabberwocky, an even less convincing bird-creature than The Giant Claw, makes us wish for the kind of funding that Gilliam would eventually enjoy with The Adventures of Baron Munchausen.

Gilliam fought against branding his film with the Python label but shades of the Holy Grail, there’s no escaping it. Terry Jones kicks off the film as a bumbling poacher made mincemeat by the creature and the script (by Gilliam and Charles Alverson) mirrors the Grail’s story of wayward heroes on a legendary journey. The film, whose mud-caked denizens are well-versed in Python’s anachronistic humor, could be considered a dry run for Holy Grail were it not for the fact that Grail preceded Gilliam’s movie by two years.

That said, even with a story that is labored and unconvincing in its social satire, the movie is superbly directed. Gilliam’s low budget apparently precluded an original score but the use of Mussorgsky’s Night on a Bald Mountain and Berlioz’ Symphonie Fantastique is simultaneously chilling and amusing. And Terry Bedford’s cinematography is the ravishing high point of the production, aping Caravaggio’s chiaroscuro in fine style. Criterion’s new Blu ray of Gilliam’s low-fi epic is a glorious reproduction of those images.

The disc comes with some notable supplements including:

A 2001 audio commentary featuring Gilliam and Palin.
A new documentary on the making of the film produced by Criterion featuring Gilliam, producer Sandy Lieberson, Palin and actor Annette Badland.
A new interview with Valerie Charlton, designer of the film’s titular beast.
A selection of Gilliam’s storyboards and sketches.
An audio only segment with Terry Bedford.
A new title treatment restored for the Criterion edition.
Jabberwocky read by Michael Palin.
A new essay from Scott Tobias.