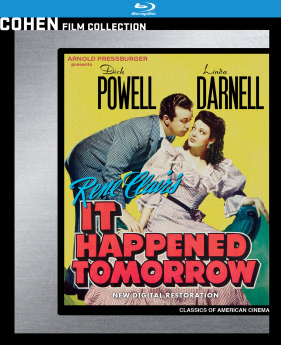 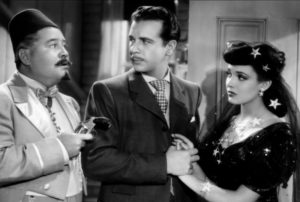 René Clair takes a trip through The Twilight Zone in It Happened Tomorrow, the story of a reporter’s perilous adventure with a different kind of time machine. Like Clair’s I Married a Witch and The Ghost Goes West, this 1944 fantasy is lighter than air but its feet are planted firmly on the ground. Dick Powell plays Larry Stevens, a struggling journalist with a literal dead end job—he writes obituaries for The Evening News. Linda Darnell is Sylvia Smith, a stage performer who predicts fortunes with the help of Oscar Cigolini, né Smith, her showboating uncle played by Jack Oakie. Sylvia isn’t the only one with insight into the future, Larry gets in on the act when he’s handed a special edition of his own newspaper—an edition special in more ways than one; the front page describes events, including a bank robbery, that won’t happen for another 24 hours.

The newspaper is a gift—of a sort—courtesy of Pop Benson, the News‘s ancient archivist. The monkish little man is played by John Philliber with a heaven sent twinkle reminiscent of that other guardian angel, Clarence Odbody of Frank Capra’s It’s A Wonderful Life (Capra was set to direct It Happened Tomorrow before he was sidetracked by the war.) Pop’s way of appearing at the oddest times is the first clue to his ectoplasmic nature—the old gent shuffled off this mortal coil a week before but it doesn’t stop him from delivering tomorrow’s news today—thanks to the jovial ghost Larry is able to report that bank robbery the night before it occurs—resulting in a scoop and a promotion. But as that other Cassandra might have cautioned, predicting the future can be perilous. 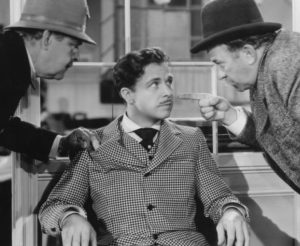 Larry’s strange powers attract the attention of the law, in particular a perennially exasperated cop played by the master of the slow-burn, Edgar Kennedy. The police are just the beginning of Larry’s problems—his miraculous success leads to a series of unfortunate events that demonstrate the downside of knowing too much; Larry plays hero to a drowning woman only to end up under her bed with an enraged chaperone at the door. A sojourn to the race track, easy money for a man with the winning horse already in his back pocket, turns nightmarish. Like a boozehound trying to fix yesterday’s problems with more booze, Larry is hooked on the news of the future. That’s when Pop materializes to grant one last wish and one more headline—the death of newsman Larry Stevens. 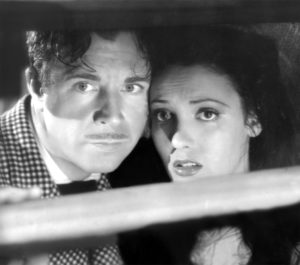 Throughout the film that time-traveling newspaper is referred to as a “miracle”—most likely an echo of the sentimental Capra’s involvement—but at the end of 1943 most moviegoers were praying for miracles; the war was lurching to its end (though not soon enough—screenwriter Dudley Nichols set the story in the 1890’s to avoid the subject), and Clair was struggling with his own self-imposed exile (his French citizenship was revoked by the Vichy in 1941). Dick Powell  himself was out of sorts—he was almost forty at the time of production and had aged out of his standard work clothes, the trademark college sweaters worn in musicals like Varsity Show and College Coach (the mustache he decided to grow for Clair’s film is no miracle). If It Happened Tomorrow is reminiscent of one of Rod Serling’s playful Zone excursions—one can easily imagine Orson Bean in the lead—Powell more than fits the bill as the fella with a contented smile and a troubled mind. Just a few months later he traded in his party clothes for Philip Marlowe’s revolver in Murder My Sweet and put his cheery persona to bed for good. 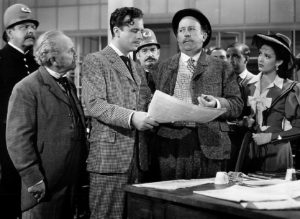 Nichols, who knew how to populate a cast with lively eccentrics (he wrote the scripts for Bringing Up Baby and Stagecoach), allows plenty of breathing room for memorable character actors like George Cleveland (probably best known as “Gramps” in Lassie) and Sig Ruman. And of course Edgar Kennedy, who endured a series of memorably hilarious humiliations from the Our Gang kids to Laurel and Hardy to The Marx Brothers. Archie Stout is credited with the cinematography alongside the great Eugen Schüfftan (Eyes Without A Face, The Hustler) but Schüfftan is listed, mysteriously, as “technical advisor.” A master of macabrely beautiful imagery, perhaps Schüfftan was responsible for the otherworldly appearances of Pop, who emerges out of the darkness at the darnedest times. Kino Lorber and The Cohen Film Collection have done right by all the craftsmen and women involved—their new Blu ray release boasts a fine looking transfer of this little seen gem. Those disc collectors with a craving for extras will have to look elsewhere, the only added attraction is the original theatrical trailer.