Billy Wilder and I.A.L. Diamond’s lavish movie boils down to a dirty party joke, but they struck gold just the same. Audiences flocked to see Jack Lemmon and Shirley MacLaine reunited in a fantasy Parisian red light district, in a show that looks like Disneyland for fans of Playboy cartoons. 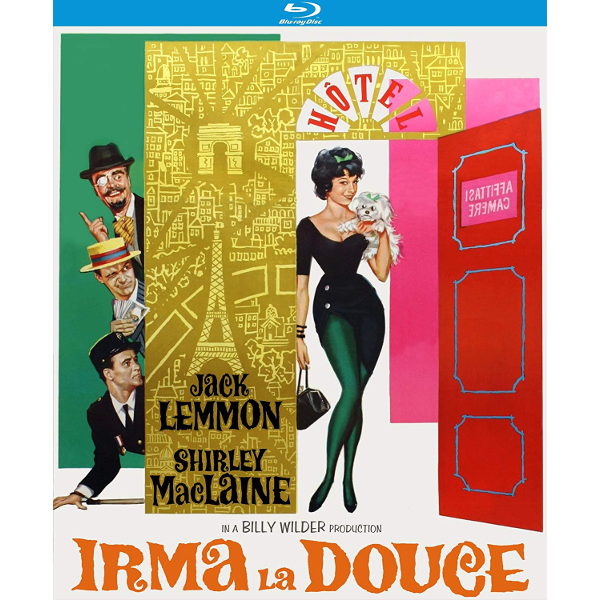 Although there’s no such thing as a bad Billy Wilder movie, it isn’t as if they’re all created equal. As it turns out, his biggest box office success comes up a bit short in the charm department, with its sometimes-thin jokes sagging under the weight of an ultra-long running time. Still, there’s a great deal to admire in the production, especially André Previn’s adapted music score.

Irma La Douce means well, and much of it certainly brings a smile to one’s lips, but it’s one of Billy Wilder and I.A.L. Diamond’s least successful films. Its physical design is remarkable and its color dazzling, but this time around the ‘dirty Wilder fairy tale’ outwits itself. Repressed by the Production Code, Americans of 1963 were curious about the unrestrained adult content in all of those foreign art films they weren’t allowed to see. The real impetus for Wilder’s picture was likely Jules Dassin’s Never On Sunday, a French-Greek production that received a U.S. release even though its subject is a Piraeus prostitute who loves her work.

Irma is actually fairly daring — the glowing Joseph LaShelle images, in Panavision and Technicolor, even flirt with partial nudity. Wilder and Diamond don’t do anything wrong, exactly, but after our initial surprise the story weaknesses begin to show. Jack Lemmon’s character becomes too cartoonish to maintain our sympathy, or for the sentimental conclusion to take hold. Perhaps these shortcomings are noticeable only because this is a Billy Wilder picture — it’s still far above average.

Wilder wrings every joke possible from pop illusions about prostitution, the comic myth of a carnal candy store for adults. The naíve, sweet gendarme Nestor Patou (Jack Lemmon) is transferred to a notorious Rue Casanova, a narrow lane frequented by streetwalkers. He’s so green that he actually pays for the apple he takes from a street vendor. Shocked to discover that gambling is going on here flesh is being peddled on the sidewalk, Nestor calls in a raid. That disturbs the existing arrangement between the pimps and the cops, especially when his dragnet brings in his own chief along with the girls. Now jobless and back in the Rue Casanova he’s befriended by bartender-racounteur Moustache (Lou Jacobi) and adopted by the #1 hooker Irma La Douce (Shirley MacLaine). To keep Irma, Nestor must defeat Hippolyte the Ox (Bruce Yarnell), her mec,or pimp. But he refuses to become a pimp himself because he can’t bear for Irma to sleep with anyone else. To that end Nestor disguises himself as an English twit named ‘Lord X,’ who monopolizes Irma and pays her a fortune just to play cards. But this puts Nestor in a catch-22: he must work like a slave in the street market to earn the money to pay Irma so she can keep him. Worse, his long absences convince Irma that he’s seeing one of the other girls – perhaps Kiki the Cossack (Star Trek’s Grace Lee Whitney) or Lolita (Hope Holiday).

Liz Taylor and Richard Burton aside, Jack Lemmon and Shirley Maclaine are the star pairing of the year 1963. They don’t achieve the sure-thing chemistry that graced their superlative The Apartment three seasons before, mainly because Wilder pitches their characters at the level of a Little Annie Fannie comic strip. Nestor and Irma are efficient at swapping dirty double entendres about sex in between slapstick encounters, but they’re in some way unsatisfactory. They never even kiss on screen, and we never warm up to them. Of course, Wilder is a master at slipping in surprisingly vulgar jokes. When chastized by Nestor, Irma doesn’t realize his complaint refers not to her, but to her dog: “There are rules you know! You need to put it on a leash!”

Wilder is obviously taken with his notion of a Red Light district that operates as a sentimental sidewalk bazaar for carnal sin. The girls have outrageous names like Amazon Annie and Suzette Wong. They’re perfectly happy in their work, sauntering along the crooked rue hawking their wares. Their mecs are organized in a slyly-named association that carries the acronym M.P.A.A.. The much praised interior-exterior Rue Casanova street sets designed by Alexandre Trauner make everything look warm and rosy, and the supporting chorus of comediennes come wrapped in costumes straight from the color cartoons in Playboy.

Irma La Douce had recently been a successful Broadway musical but Wilder dropped the songs and went back to the original play. Nestor begins as a pure-minded medal winner for rescuing a kid in a playground and his rather depressing fall from grace is depicted with a flippant ‘way of all flesh’ attitude. Neither Nestor’s suffering nor the attractive French fantasy world he and Irma live is all that pleasant, even with slapstick gags and funny fights breaking out nightly in Moustache’s cafe. Nestor’s defeating Hippolyte in a fight doesn’t work, as we never believe Jack Lemmon would fight anybody (especially not after Fire Down Below). The biggest fun-killer is Nestor’s ‘Lord X’ persona, which simply doesn’t play very well. Wilder tries to make ‘X’ a composite of every English movie cliché going. The English Twit jokes lack wit and Lemmon’s fake teeth and eyepatch are terminally unfunny. Lord X is just not in the same league as Lemmon’s superlative Daphne in Wilder’s Some Like it Hot. This time around, Wilder’s Perfect Comedy Mousetrap is more frustrating than funny. Irma loves Nestor and is willing to sleep with other men in order to stay with him. Nestor can’t abide this so goes in disguise and pays her big sums not to sleep with anyone else. But he has to secretly work so hard to earn this money that she decides he’s cheating on her and stops loving him. The crazy situations in other Wilder stories usually make a clear statement about human romance, but the only lesson here is a smarmy ‘ya just can’t win with females.’ Wilder’s next picture Kiss Me, Stupid is technically far sleazier yet its farcical framework of mistaken identity and deception boils down to an ironic endorsement of good values, and an interesting examination of the convention of marriage. The comic framework of Irma La Douce doesn’t even support its old-fashioned sex jokes, as it lumbers on for two hours and 23 minutes. We’ve really bailed much earlier, when Nestor defeats Irma’s pimp and takes her for his own.

The main mystery about Irma La Douce is why the real M.P.P.A. didn’t pounce on it like a sardine at a cat show. Yes, the Code office gave comedies wider latitude than dramas. But the movie breaks multiple rules while flaunting its dirty jokes without a shred of enlightenment. One would have to think the grand cathedral wedding with the bride lurching about from labor pains would also have dropped a flag over at the Catholic Legion of Decency. Maybe they were all too flattered by the same year’s The Cardinal, and Wilder’s film slipped by.

The more serious critics called Wilder’s sex romp a stinker, the capper show from a cynical master of bad taste. I remember reading a notice from one reviewer who couldn’t get past the sight of the bored-looking Shirley MacLaine showing off her bright green underwear for Nestor. 1963 audiences must have wanted to see what the fuss was about, as Irma La Douce became Wilder’s biggest moneymaker of the 1960s. It’s said that Elizabeth Taylor was courted to play Irma, but we find it hard to imagine anybody listening to jokes if Liz were wearing Irma’s racy green underwear. A more established rumor is that Charles Laughton was originally set to play the loquacious bartender Moustache, until sickness forced him to bow out. Wilder bios relate the story of the director visiting the actor to read the script and laugh together, when both men knew Laughton was sinking fast.

The large supporting cast provides some dividend pleasures, especially the inhabitants of Wilder’s Rue Casanova. Along with the aforementioned Grace Lee Whitney, Joan Shawlee and the hilarious Hope Holiday return from The Apartment to play exaggerated hookers. The cult vixen Tura Satana of Faster, Pussycat, Kill! Kill! is the sultry Suzette Wong. Very visible as customers are TV star Bill Bixby, and a very young James Caan. Cliff Osmond and Howard McNear, both of Kiss, Me Stupid, are here as well. Wilder’s larger scenes with dozens of actors dancing and fighting in the Cafe Moustache, are beautifully staged.

The KL Studio Classics Blu-ray of Irma La Douce Looks and sounds great, making the old (2003) MGM DVD instantly obsolete. The sharp transfer gives us our first good look at the film’s beautiful art direction and cinematography — it’s a pleasure to spend time on the Rue Casanova, even as a spectator. We also note André Previn’s award-winning music, which adds a vein of sweetness that the film needs. We’re told that some of the unused songs from the musical version were utilized as underscore.

Kino lavishes two full commentaries on Irma, both of which are fun listens. The venerable Joseph McBride tackles the first track with a lengthy unbroken conversational lecture. Covered thoroughly are the film’s production, Billy Wilder’s career and McBride’s own experiences of being a Catholic boy who snuck out three times to see a film that his church congregation had sworn to boycott. McBride’s new book How Did Lubitsch Do It? acknowledges Billy Wilder’s status as an acolyte of the great director, but he doesn’t draw as many comparisons as I thought he would — the garbageman that opens this movie seems an ode to Ernst Lubitsch’s Trouble in Paradise. McBride also reads at length from one of his own interviews with Billy Wilder.

Kat Ellinger’s track goes off in other informative directions, telling some of the same Wilder stories but pulling in different associations from pop cinema. The presence of Tura Satana, for instance, instantly gets us a précis of one of the stripper-actress’s Russ Meyer epics. Ms. Ellinger is the Editor-in-Chief at Diabolique Magazine.

The film’s playful part-animated original trailer is included as well, narrated by Paul Frees. It looks as though it were animated for flat-widescreen, and then adapted to ‘scope proportions. The trailers and publicity for all of the post- Some Like It Hot films trumpet Wilder as a director-star in his own right, pitching the films to an urbane, movie-wise audience,

The only reason I can think of to retain the old DVD is the fact that it carries alternate French and Spanish dub tracks.