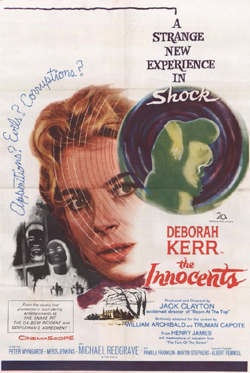 Jack Clayton’s masterpiece, one of the greatest cinematic ghost stories, is ill-served by this lowbrow trailer that sells it like a cheap Eurotrash import. Although not a commercial success at the time, it has since been hailed as one of the best British films of the 1960s, with a powerhouse performance by Deborah Kerr as the frightened, possibly deranged governess. Her chilling charges are played by Martin Stephens (Village of the Damned) and, in her film debut at 11 years of age, Pamela Franklin.

Here’s an in-depth look at Henry James’ most-dramatized classic “The Turn of the Screw”
On the Most Adapted Ghost Story of All Time ‹ Literary Hub
Buy the movie at: