More than one feature film looks at the making of this picture, focusing on its author, Truman Capote. Criterion’s disc returns the discussion to Richard Brooks, the director that dared adapt an unfilmable novel of lurid, unthinkable crime on the Kansas prairie. It’s also a last gasp of artistic B&W cinematography from Hollywood, thanks to the indelible images of Conrad Hall. 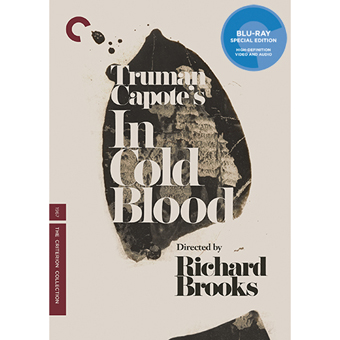 Some directors just want to work. Others want to be famous and live the big lifestyle. Those openly professing artistic ambitions have often had a hard time of things, either not meshing well with the machinery of Hollywood, or finding various roadblocks to their creativity. Coming out of WW2 was a generation of ‘tough guy’ directors, not necessarily because of the content of their film, but for their struggle for a measure of creative independence in a town geared to discourage such notions. Directors that were primarily writers had a steeper hill to climb, especially if they sincerely had ‘something to say’ in their pictures. One of the writer-directors with a good batting average for beating the Hollywood game was Richard Brooks.

What happens when a powerful director who writes his own material, adapts a book by an author with a strong artistic identity of his own? Truman Capote’s book In Cold Blood was a sensation of the ’60s. Readers were accustomed to emotionalism and polemics when reading about crime. Capote took one of the more notorious mass murders of the late ’50s and approached it from dual perspectives — the hard, adult facts of the case down to the tiniest detail, and a parallel philosophical investigation of the meaning, if any, to be found behind the crime.

It’s perhaps true that Richard Brooks tended to over-write and overstate his case in his films, but he compensated with excellent story judgment and superb casting. In Cold Blood is one of his best and most controversial films. His documentary-like detachment is true to Capote’s unemotional aim, and his ‘psychological’ embellishments work rather well most of the time. Forty years later we have a seamy tradition of ‘semi-documentary’ serial killer movies that catalog heinous true crimes without comment, and they’re taken as horror entertainment. Like Capote, Brooks may have been a progressive eager to pose Big Questions — “Is capital punishment murder?” — but at least he saw that there were questions to ask.

It’s a bleak time on the prairie. Parolees Dick Hickock (Scott Wilson) and Perry Smith (Robert Blake) link up to steal 10,000 from a rich farmer’s safe, kill all the witnesses and retire to a life of ease. Their victims, the Clutters of Holcomb, Kansas are an ordinary family with ordinary problems and hopes. At 2 AM, the attackers arrive and walk into the unlocked house armed with a shotgun and a knife. 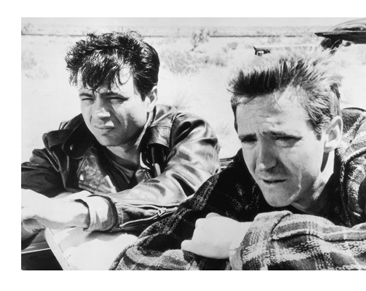 1967 reviews of In Cold Blood characterized it as a horrible, taboo-breaking semi-documentary for which ordinary citizens weren’t prepared. They praised its realism, the excellent acting, and especially Richard Brooks’ unusual script. But the grim case history was deemed too extreme for film subject matter. Most coverage treated the film as a symptom, not a movie. This was the year of Bonnie & Clyde and Point Blank, and many reviewers were concerned that movies in general were taking a turn toward pornographic extremes of violence. One review I read of In Cold Blood talked more about the real crimes than those on screen. Reading about the movie in advance, I imagined the image of a victim’s head being blown off as they sat up in bed, with the gore splattered across two yards of wallpaper. For years I thought a scene like that was in the movie.

That kind of excess doesn’t happen in In Cold Blood, not a bit. But the atmosphere of incipient violence makes Brooks’ reserve seem horrible just the same. One of the killers describes himself almost immediately as a ‘natural born killer.’ It would be decades before a filmmaker would make the subject into a circus-y celebration of bloodlust.

Brooks filmed his crime saga in the actual locations where the crime happened, including the murder house. This was promoted in the advertising and so added both to the macabre atmosphere and the docu aspect. As the killers and investigators move about, we see big stretches of Kansas and pieces of various deserts. [ The desert scenes all look to have been filmed just North of L.A. In one roadside view I believe I can see a hill that Universal’s old Tarantula crawls over. ]

Brooks doesn’t use non-actors in most of the leading roles. Robert Blake and Scott Wilson are excellent as the pitiful losers who only become lethally murderous when linked as a pair, feeding on each other’s psychopathology. Wilson (The Gypsy Moths) is a slick hick, smooth enough to con unsuspecting store clerks but also enough of an idiot to fall for tall tales of farmers hiding loot in their houses. Blake’s Perry Smith is a thoroughly pathetic sad sack with complexes about his miserable family life and his short stature. He is so naïve, he believes in a screwy treasure hunt idea off the coast of the Yucatan.

Equally good are the killers’ fathers, played by Noir veterans Jeff Corey and Charles McGraw. Without making sentimental cases, they remind us that even the killers have family members who think about them.

The actors playing the Clutters seem like non-pros, but three out of four were stage veterans that went on to extensive film careers as character actors.

On the side of the law we have familiar G-Men character actors taking the roles of the cops and agents searching for the killers. Brooks gives them sympathetic parts to play. The main sleuth is John Forsythe, then well-known as the genial star of TV’s Bachelor Father. He’s an agent of a law-enforcement agency called the FKI. Forsythe is normally as tight-lipped and task-oriented as the rest of the cops, but on more than one occasion he’s utilized to voice ‘author’s opinions,’ as when he takes a newspaperman to task for how the police are characterized during crimes like this one. 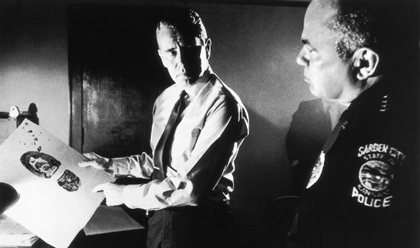 The real author’s mouthpiece is Paul Stewart’s Jenson, a reporter affiliated with a major magazine but covering the crime on his own. Jenson would naturally seem to be the Truman Capote figure. He makes himself an objective fly on the wall and from time to time delivers sage pronouncements about capital punishment. In a movie bereft of moral judgments and editorial comment, we snap up these nuggets like wisdom from the mount.

Brooks pulls a narrative trick that sustains suspense while increasing the dread factor. Just as the killers are arriving at the Clutter spread, the film skips over the actual crime. It instead cuts to the panicked reaction the next morning when their bodies are discovered. Thus, the growing awe around the murders is reflected in the faces of the locals and cops who must clean up the mess and sift through the clues. Since we haven’t seen their awful work, the foolish fugitives retain a modicum of sympathy as they crisscross the country in stolen cars. Then, when one of them makes a full narrative confession during a nighttime car trip, we finally see the crime itself, as the opening curtain of the third act.

After that, the trial and the execution wait are uneventful formalities that seem unrelated to the tragedy and carnage. The intent seems to be to show the state’s parallel brutality in ‘murdering’ the criminals, but if Brooks wanted to push the anti-capital punishment issues, he makes few converts. Pitiful though they may be, Hickock and Smith are dangerous vermin that need to be safely put away.

We start In Cold Blood thinking we’re in for a sleazy ride, but it turns out to be artistically valid and socially responsible.

Despite the semi-docu format, Richard Brooks’ direction is a catalogue of expertly judged visual and verbal effects. We expect the film to fall apart with each flashback, and when one of Robert Blake’s fantasies takes over. But each tangent just enriches the experience. Robert Blake is given an elaborate background of bad parenting and adolescent trauma, but the treatment is so expert, it doesn’t come off as liberal excuse making.

Conrad Hall’s B&W images are practically perfect. Hitchcock designer Robert Boyle makes every setting more than believable, especially the Clutter house with its drab basement and upstairs (?)kitchen. Best of all is Quincy Jones’ light jazz score, which never intrudes but has a subtle effect on many tense scenes.

The only shot I just don’t understand is an angle of a high-speed train dropping off mail bundles as it roars through the Holcomb station, seen just as emergency vehicles are rushing to the crime scene. Is it just an irrelevant tension builder?  Some kind of link to Bad Day at Black Rock?  Or is it the mail drop the most exciting event in Holcomb — on days that horrible murders don’t occur? 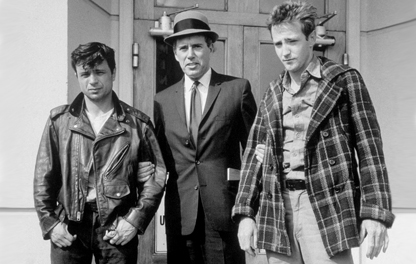 The Criterion Collection’s Blu-ray gives us Richard Brooks’ In Cold Blood in a stunning B&W presentation. I can’t claim to have been sensitive to its artistry in 1967, when watching the movie was a case of anticipating dreadful crimes and rolling with the punches. But this has to be one the top monochrome movies of the decade. A few years back there was a rising fan cult of fans of anamorphic B&W pictures, either CinemaScope or Panavision like this one. The HD transfer has the contrast to render those mostly black scenes as real black. Objects move in and out of the darkness in a way that’s very powerful. It’s a dark world out there.

Disc producer Kate Elmore has found and produced a stack of excellent extras, especially three new interviews. Cameraman John Bailey examines Conrad Hall’s visuals, while Gary Giddins critiques the score by Quincy Jones. Douglass K. Daniel gives us a thorough appraisal of Richard Brooks the writer, who struggled to retain power over his film productions. Daniel says that the Jenson character is not supposed to be Capote, but instead Brooks himself. Capote’s book expended much more attention on the Clutters, while Brooks focused on the killers, to make a strong anti capital punishment message.

Brooks himself appears in a French interview from 1988. Capote is here in two NBC news episodes, one of which shows Barbara Walters doing a decent job interviewing him. In Albert and David Maysles’ short film With Love from Truman, the author is very candid and natural.

A trailer is included as well. The insert pamphlet has an essay by Chris Fujiwara. He in part focuses on the challenge for Brooks of giving his film the realism of a docu realism, yet also insuring that it’s entertaining for conventional commercial film audiences.