Bette Davis, Olivia de Havilland and Agnes Moorehead play it nasty, chop-chopping their way through a Grand Dame Guignol epic of ‘sixties Hag Horror. Ace director Robert Aldrich’s big success handed the deserving Davis a big role, and it looks better than ever on this razor-sharp remastered edition. With good original film promos as well as a lively new commentary. 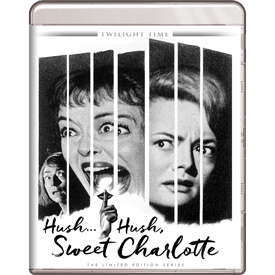 Good horror pictures featuring big stars were once fairly rare; this month Twilight Time gives us a sterling edition of one of the best. Robert Aldrich’s upscale follow-up to What Ever Happened to Baby Jane? is quite a shocker. What it lacks in credibility or subtlety, it makes up in entirely unexpected gore. It’s also a taut suspense picture, at least the first time around. For repeat viewings, the able histrionics of Ms. Davis and company can be appreciated for their basic professionalism: it’s just plain fun seeing an Oscar-winning great lady like Olivia de Havilland deal with a severed head and dispose of a corpse in a swamp. 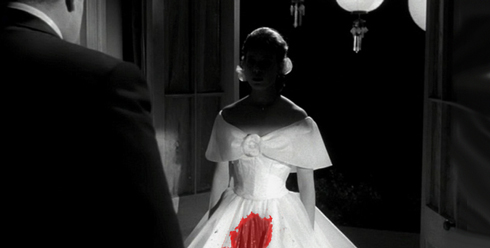 The story has an acute case of Gothic sprawl. It’s 1964. Charlotte Hollis (Bette Davis) has lived for almost forty years as a recluse in her father’s Louisiana mansion. In 1927 she was the leading suspect in the beheading murder of her married lover John Mayhew (Bruce Dern). Now road builders want the ‘crazy’ Charlotte evicted from the family mansion. Charlotte’s ‘poor relation’ cousin Miriam Deering (Olivia de Havilland) and doctor/friend Drew Bayliss (Joseph Cotten) have come to convince her to surrender the property without more embarrassing scenes. But Charlotte is experiencing weird hallucinations that focus on the legendary crime. Most of the parish already thinks she’s insane, especially when she fires a rifle at an approaching bulldozer.

Robert Aldrich’s career had been a rocky one before he got smart with his “battle of the battle-axes” Hollywood Gothic What Ever Happened to Baby Jane? That film enhanced the new respectability of the horror film by Psycho by introducing a broad element of self-referential humor. Bette Davis and Joan Crawford played fictional roles but the film teased us with the notion that Baby Jane reflected the very real feud between bitter career enemies. In 1962 both Davis and Crawford were still in total possession of their acting skills. Aldrich’s film invented ‘hag horror’ by encouraging the Divas to send up their glamorous images with a show of grotesquerie.

Smelling a gold mine, Aldrich and his key writer Lukas Heller leaped to repeat their winning formula. Joan Crawford backed out at the start of production, forcing a replacement in the person of Olivia de Havilland. What the quasi-sequel Hush… Hush, Sweet Charlotte gives up by losing Crawford, it gains in freshness. De Havilland’s saccharine Miriam Deering plays off her enduring image as the sweet Melanie Wilkes from Gone with the Wind, giving the bloody murder story a particularly jarring raw edge. 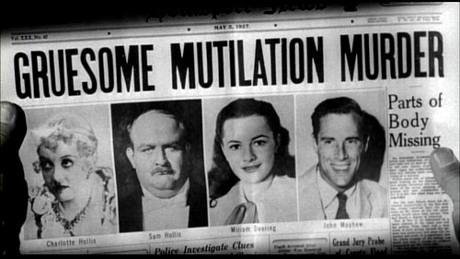 Hush… Hush, Sweet Charlotte needs the star power because as a thriller it’s actually a little flabby. A running time of 133 minutes is a real ordeal for a murder tale of this kind. Some of the story is cribbed from Baby Jane and other elements derive from H. G. Clouzot’s French classic Diabolique. The creepy long-ago murder gives us a surfeit of red herring characters, not to mention unlikely (or impossible) conspiratorial maneuverings by the villains. The slowly paced film reinforces every plot point and expository fact at least two or three times. Aldrich’s suspense technique almost guarantees the film won’t be frightening on a second viewing… every other scene is a drawn-out tease, waiting for murderous attacks that never seem to happen. Even after the carnage kicks into high gear, nothing is allowed to be implied or presumed — the talky script covers every point as if Sweet Charlotte were a radio show. This is not a bad thing when it comes to seducing an audience: Aldrich’s film had audiences screaming, and many returned to look for more clues and reverse-engineer the mystery.

Davis and de Havilland perform wonders in keeping their characters interesting and mysterious, no matter how literal or illogical the writing. (spoiler) For instance, why the heck would Miriam Deering try to approach Jewel Mayhew (Mary Astor) as a friend, when they’ve have been in a viciously adversarial blackmail relationship for 35 years? For whom is Miriam grandstanding? That’s just one of a half-dozen scenes that on a second viewing seem like a cheat. Why do Dr. Drew and Miriam go through all the difficulty of their last grand charade to drive Charlotte over the edge? Most of the locals already think that Charlotte is a dangerous loony. Wouldn’t it be simpler just to frame her for murder?

Davis puts a lot of effort into Charlotte’s various mental states, and retains audience sympathy despite many unlikeable acts — threatening construction workers, flying off the handle whenever she’s contradicted, etc.. Olivia de Havilland seems sincerely concerned and maintains a credible potential for being a misunderstood good Samaritan right through the third act. 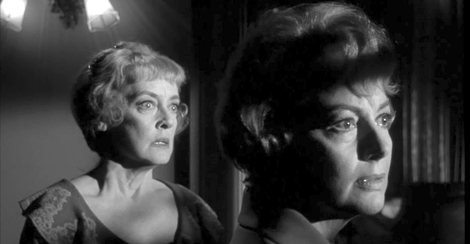 Aldrich and Heller populate the film with a great supporting cast. Everyone loves the sassy antics of Agnes Moorehead as the unbelievably frowsy housekeeper, Velma. Victor Buono and Bruce Dern are suitably creepy; Dern’s shoulders look padded out to make him look less wiry. Aldrich regular Wesley Addy is a friendly sheriff and Mary Astor (in her last film) appears as a tired woman at the end of a lifetime of suffering. Best of all is the film’s most prominent red herring, an amateur investigator played by Cecil Kellaway. He’s eventually revealed as a foundation of civility, and almost becomes a romantic possibility for Bette Davis.

It’s no wonder Joan Crawford went to such extremes to get out of Hush… Hush, Sweet Charlotte — the film not only redeems the Charlotte character, it makes her into a Guignol Valkyrie.

Horror movies were getting gorier by 1964, but mainstream audiences weren’t yet accustomed to limbs being chopped off, rotting corpses on the stairs, or a weird nightmare with masked dancers and a girl with an obscene bloodstain on her dress. The story wisely loads its gore right up front, leaving nervous viewers to wait in constant suspense for the violence to return. Hush… Hush, Sweet Charlotte is less interesting than Baby Jane— and nowhere near as deliciously sick — yet it still holds its own as a classy Gothic murder story. Critics in 1964 thought it was amusing trash, yet they admired the work of the veteran actresses – the presence of the respected de Havilland added both class and box office appeal. Although Charlotte took home no Oscar statuettes Charlotte received a bundle of Academy nominations. 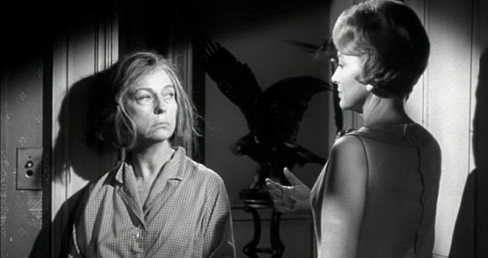 The Twilight Time Blu-ray of Hush… Hush, Sweet Charlotte is a great example of why collectors upgrade their DVDs to Blu-ray — in this case the added quality is stunning. It’s like we were watching a brand new check print from the lab. [Please let’s see this done to The Flight of the Phoenix…] It’s possible to evaluate every visual detail, and the correct aspect ratio and sharpness makes the filtered, hazy flashback scenes all the more spooky. The disc also carries several track choices, including a (re-engineered, I presume) stereo track.

TT brings us a stack of solid extras — original featurettes and those done for an earlier DVD special edition. Footage from the original ‘on the set’ featurette shows up in an excellent making-of account, and a second show about the director, both of which feature his daughter & co-worker Adele Aldrich. Especially fun is an interview piece with actor Bruce Dern, who recounts several great anecdotes with Alfred Hitchcock, as well as Davis, de Havilland and Aldrich.

New from Twilight Time is a commentary by David Del Valle and Steve Peros’ who offer good research info and a lively perspective on the film — it’s more than an offhand discussion of personalities. Del Valle cruises through his track as if conversing across a café table. Also retained is a track recorded by Glenn Erickson (me) in 2005, which approaches Hush….Hush as a horror spectacle and is a little less celebrity-oriented. 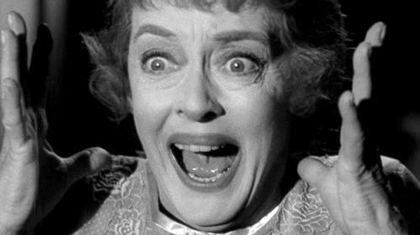 Back in 2005, correspondent Dewey Webb wrote me about an issue I wish I’d been able to incorporate into the commentary. With the new super-sharp HD transfer, this detail will be easier to check. Here’s what Dewey wrote:

“Hi! As a longtime Hush… Hush, Sweet Charlotte fan I was hoping your commentary would shed some light on the scene where Miriam arrives at the plantation. If you slow-motion the overhead (balcony) shot where the taxi pulls up in front of the plantation, it is clear that the passenger in the back seat is NOT de Havilland. The woman in the back seat is wearing an outfit in completely different contrasting colors than de Havilland and, while it’s difficult to tell for sure, appears to be wearing sunglasses and a more upswept hairdo. The costume the person in the taxi is wearing appears to be similar outfit to one Joan Crawford is seen wearing in some on-set publicity photos before she left the film. My guess is that the person seen in this shot is actually Crawford (or, at the very least, her stand-in), which means that Crawford may well make an appearance in the film after all. Any thoughts? — Dewey Webb”

Those are very sharp observations… the possibility of seeing Crawford in the movie never occurred to me, not for a moment. It makes perfect sense, as de Havilland never went to Louisiana and Crawford might have. The stand-in idea makes sense too. From all available evidence, all Miriam’s costumes were redesigned after Crawford left. I also think that many shots of Agnes Moorehead were filmed early, as cutaways, to get her scenes finished when the production was delayed. At some point Moorehead presumably had to go do her work on Bewitched, which hit TV in the Fall of ’64.That may be why we only see her observing from afar when Davis meets Kellaway, etc.