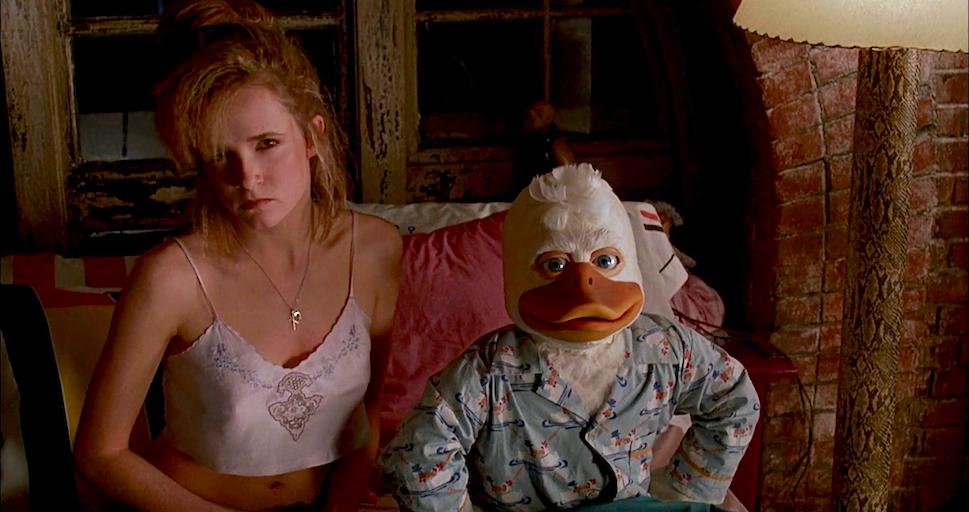 On this date, 35 years ago, the world was changed forever.

Howard The Duck, the first feature film to be adapted from a Marvel comic, was unleashed upon the world on August 1st, 1986, leading to decades of beloved blockbusters that would —

Oh wait, just kidding. It took a few more decades, and some much better movies, until the MCU engulfed the industry.

One of the craziest non-blockbusters ever produced, Howard The Duck was optioned and developed with mega-franchise aspirations. Howard The Duck is a film so uncomfortably weird that, even now, it must be seen to be believed, though I’ll do my best to discuss its relative non-charms here.

Written, directed and produced by the creative team behind the much-better American Graffiti (1974), Howard The Duck landed with a thud at the domestic box office in the summer of 1986. Critics weren’t much kinder. The film currently sits at a 14% “Tomatometer” rating on review aggregator Rotten Tomatoes, a number that honestly feels a bit high. Universal Pictures found out the hard way that indifferent audiences and critics alike had little interest in a perverted anthropomorphic space duck and his efforts to help a Cleveland-based rock starlet try to reach platinum success.

This $37 million atrocity has, thanks either to humanity currently occupying the darkest possible timeline or the rose-tinted glasses worn by pre-CGI ’80s nostalgists, somehow managed to become misremembered as an under-appreciated gem. It is not. Is it fascinatingly re-watchable, like a surreal nightmare from which you cannot look away? Yes. Yes it is.

A loosely-plotted mess of a movie that is more a collection of partially-realized wacky story fragments than a coherent narrative, Howard The Duck was written by Graffiti screenwriters Willard Huck and Gloria Katz. Katz co-produced the picture with American Graffiti helmer George Lucas (yes, that George Lucas). Huck also directed the flick.

Due to a seemingly arbitrary armchair accident (which turns out to be the result of an Earth-bound laser spectroscope summoning gone awry), Howard finds himself catapulted from his home planet of Duckworld to Cleveland, Ohio, where he quickly befriends wanna-be rocker Beverly Switzler (Lea Thompson). 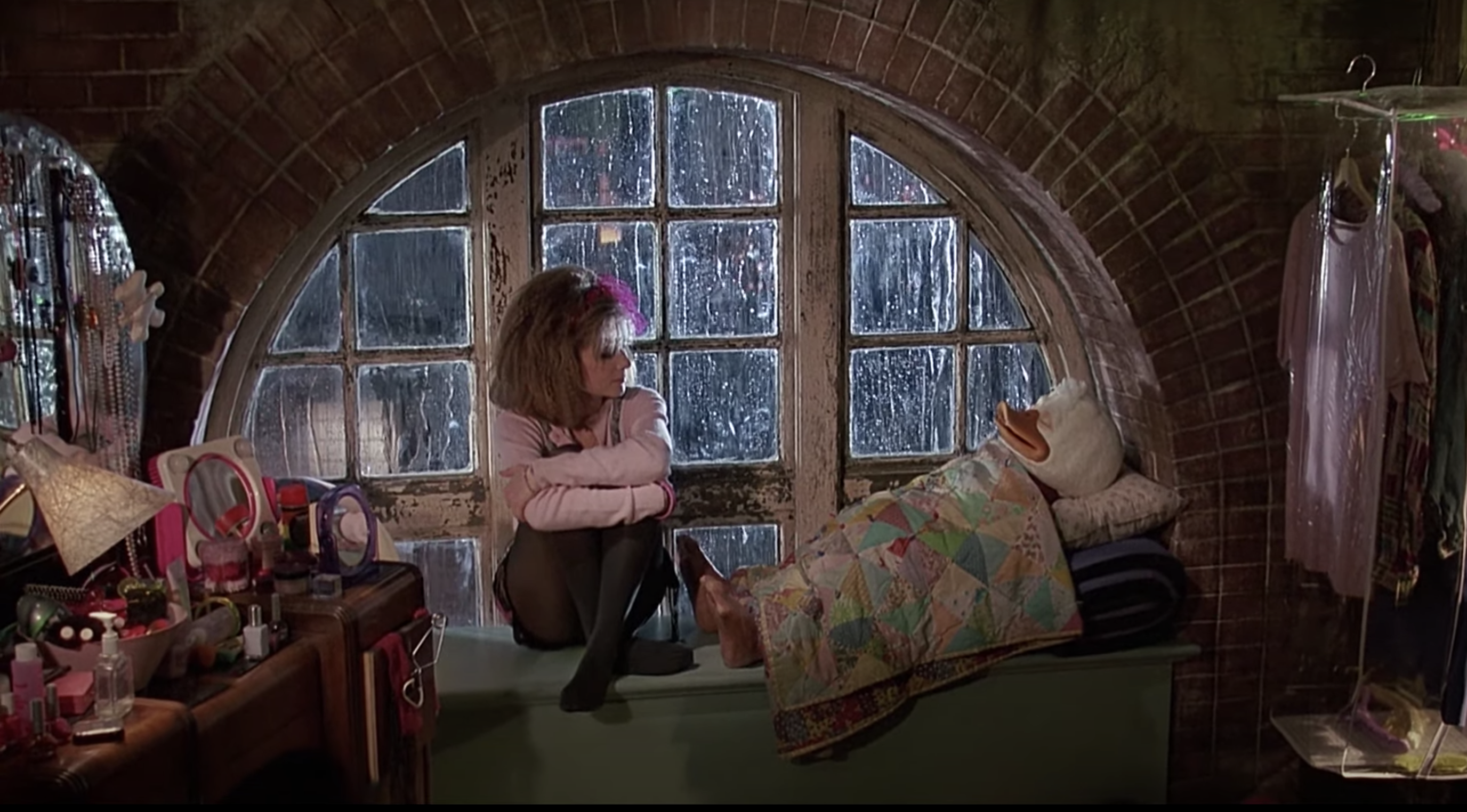 Beverly and Howard sort of cavort around for a while and flirt uncomfortably (more on that in a bit). Eventually, they get together with scientist Dr. Walter Jenning (Jeffrey Jones) and eccentric lab janitor Phil Blumburtt (Tim Robbins), who try to devise a way to return Howard to Duckworld. Eventually, we discover that Dr. Jenning’s body is being inhabited by a destructive telepathic extraterrestrial force that claims it is the “Dark Overlord of the Universe.” During the film’s rushed action climax, the Dark Overlord overtakes Dr. Jenning’s corporeal form via a very cool-looking Phil Tippett stop motion puppet.

Howard and Beverly naturally, inevitably, and fairly easily defeat the “Dark Overlord” because this was apparently a PG-rated children’s film (more on why that makes no sense in a minute, and yes it has a lot to do with the uncomfortable flirting), but Howard is now stranded on Earth. He makes the best of it and continues on as the manager for Beverly’s band Cherry Bomb (named after the excellent Runaways song, no doubt), while Beverly recruits Phil to serve as a stage hand. 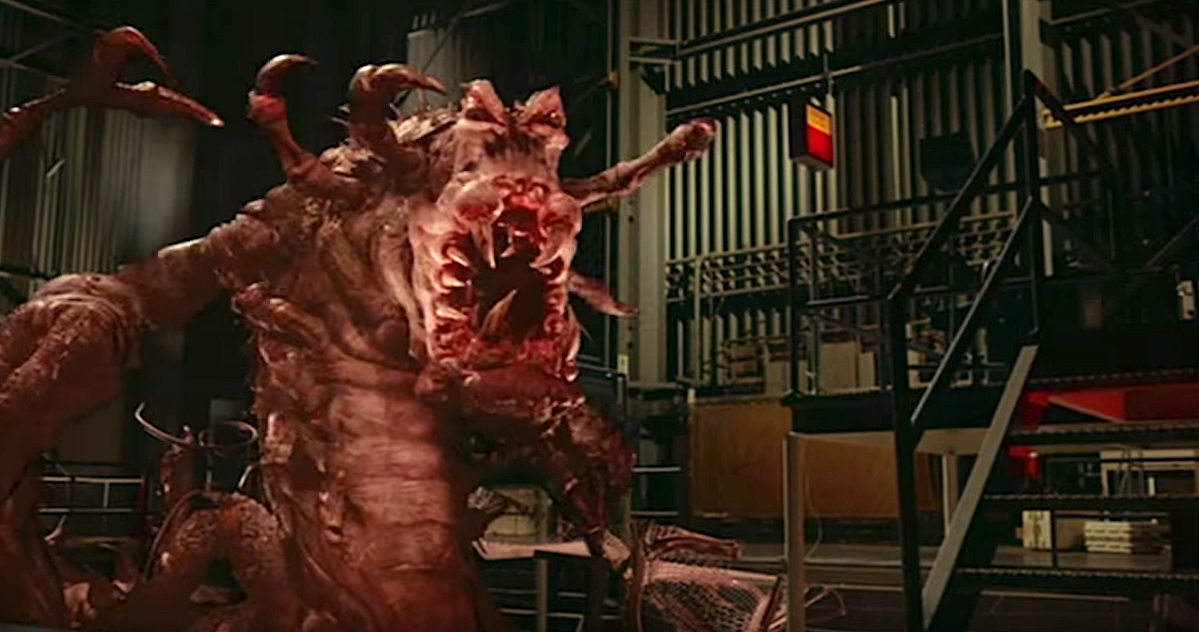 In the original comic book series, Beverly and Howard date. Howard comic creator Steve Gerber and illustrator Gene Colan deftly tiptoed around the line of acceptability (as dictated by the Comics Code Authority at the time) with regards to Howard’s physical relationship with his ex-nude model girlfriend Beverly.

In the movie, things don’t go quite as far, but my goodness, do they get uncomfortably far enough. Beverly and Howard make out, and both characters alternately, awkwardly, tease about interspecies coitus, each weirdly trying to push the other’s boundaries as a scantily clad Beverly puts the (faux?) moves on a pajama-attired Howard until they both agree, pretty late in the game, that they were just kidding. 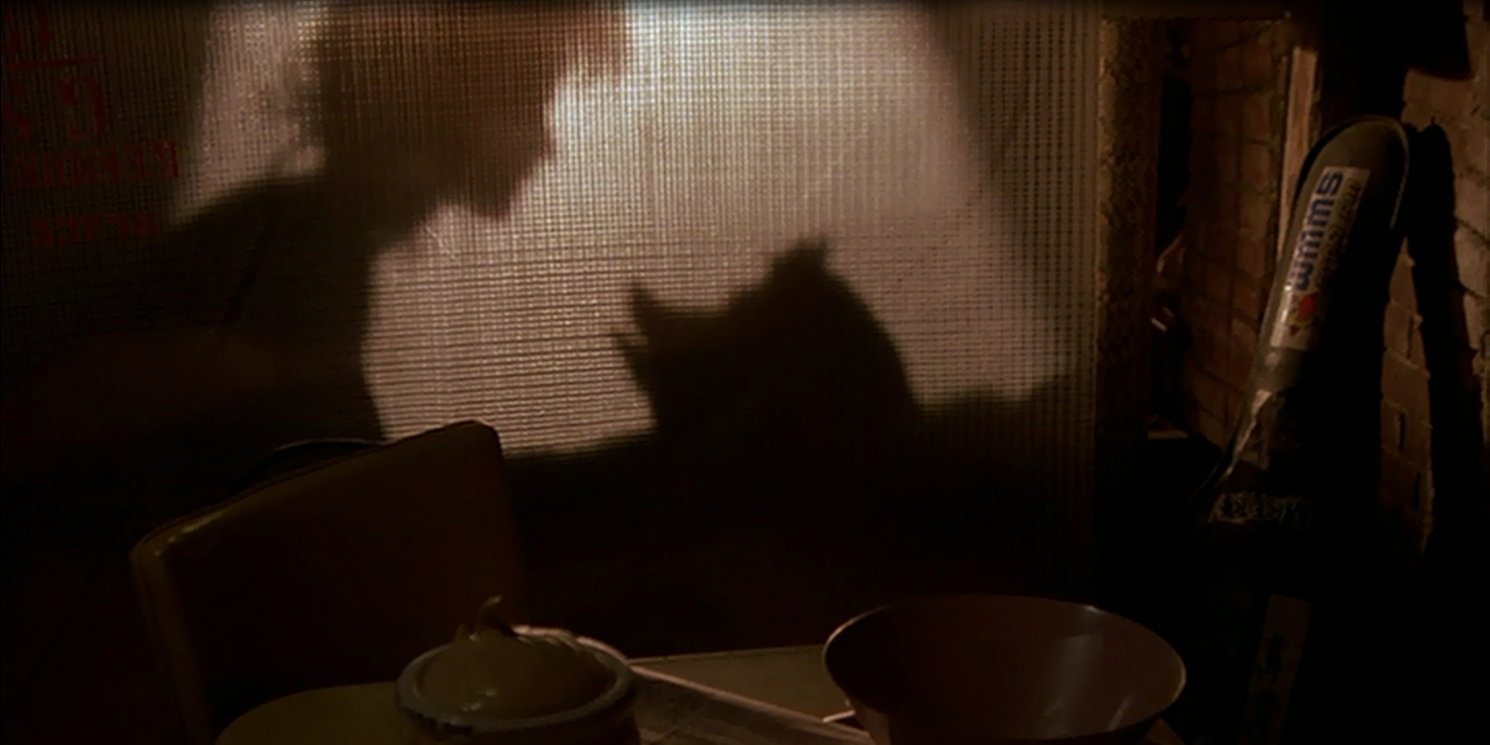 Incidentally, Thompson’s near-sex with a duck later disturbed and confused her daughter, actress Zoey Deutch, when she stumbled across the film on cable.

Regardless of the movie’s transgressions, there is no denying that Howard The Duck is at least captivatingly bizarre, a franchise miscalculation so strange that it almost dares you to stop watching, but so hypnotically singular that it will permanently imprint itself onto your brain until the end of time.