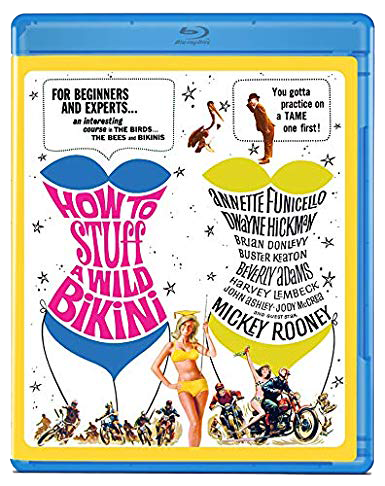 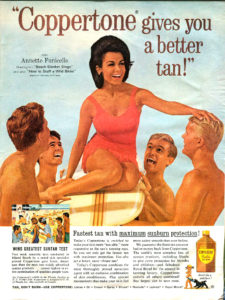 Sam Arkoff and James Nicholson, the men behind such teen-friendly drive-in fare as Reform School Girl and High School Hellcats, caught a monster wave with 1963’s Beach Party and hung on for three long years before sinking into the sunset with Ghost in the Invisible Bikini, a haunted house spoof starring Tommy Kirk and a frail Boris Karloff.

It was a wild ride sustained by Annette Funicello, Frankie Avalon and a rotating cast of fun-loving deadbeats who would become as familiar to 60’s audiences as Eugene Pallette and Hugh Herbert were to depression era movie fans. As weighty as a cherry popsicle in July, the movies were aimed at high schoolers but the gags were older than dirt – vaudeville humor with that Coppertone tan.

Perched near the end of the series, 1965’s How to Stuff A Wild Bikini was the first to exhibit signs of franchise collapse due to the most predictable of circumstances – the kids were growing up. Annette’s pregnancy resulted in some tummy-hiding caftans and Avalon phoned in his part thanks to his tenure on the simpleminded army farce, Sergeant Deadhead. 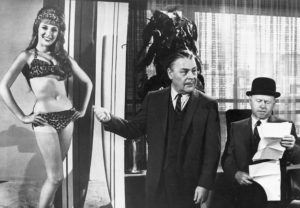 Actors of an earlier, more golden era, signed on as the adults in the room with Mickey Rooney himself as Peachy Keane, a hard-charging ad man using the beach bunnies as a launching pad for a “perfect girl” contest and Brian Donlevy as his avuncular boss. 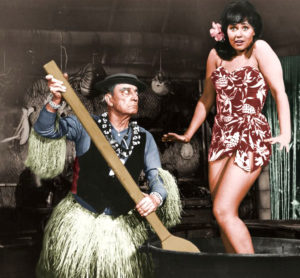 There is one bona fide genius in the waterlogged cast and that would be Buster Keaton – at low tide as a Tahitian witch doctor who casts spells from a grass hut deemed too slipshod for Gilligan’s Island. His deadpan demeanor was typically a glumly ironic reaction to his outrageous fortune but here he seems to really mean it.

Hickman plays a younger version of Rooney, a supercilious ad man cozying up to Annette while the jealous Frankie is stuck in Tahiti with the Naval Reserve. Keaton’s witch doctor conjures up a “perfect girl” of his own and sends her to thwart Hickman’s advances and win the contest to boot. 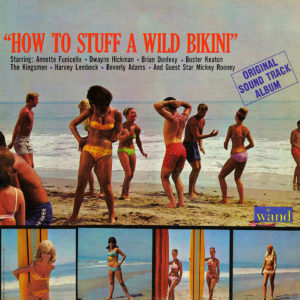 Apologies to Bruce Brown but the beach party films were the real endless summer – a sun baked never-never land of warm sand and puppy love interrupted only by distant cries of “surf’s up!” and the occasional song. Those songs. Dear god, those songs.

Wild Bikini was produced in an era when rock n’ roll was, like Van Morrison,  “floating into the mystic.” The songs in Asher’s film are the opposite of innovative and there are a lot of them. Written by Guy Hemric & Jerry Styner they have titles like That’s What I Call a Healthy Girl and After the Party, each one more tuneless and monotonous than the last.

The beach party movies were popular enough – especially with publicity-minded record labels – to attract artists like James Brown (Ski Party), Stevie Wonder (Muscle Beach Party) and The Supremes (performing the title tune for Dr. Goldfoot and the Bikini Machine) Wild Bikini offers up The Kingsmen, a garage band best-remembered for the caveman stomper Louie, Louie (first recorded by its composer Richard Berry in 1957). 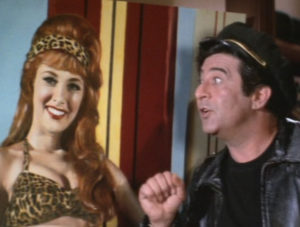 The film races through its 90 minutes before flatlining with a finale familiar to audiences of the era – the chase scene. It’s difficult to put a finger on when or where this tiresome tradition sprang up but it infected big budget hits from What’s New Pussycat to A Funny Thing Happened on the Way to the Forum.

Like the tight-knit friends who disperse after the last day of class, the beach party stars slowly dispersed leaving the films to take a turn for the weird with Dr. Goldfoot and Ghost in the Invisible Bikini. Save for the vaguely related Fireball 500 and Thunder Alley, both racetrack films starring Annette, that was all she wrote.

Olive Films has released a typically bare-boned Blu ray edition of How to Stuff a Wild Bikini and the CinemaScope vistas of Paradise Cove in Malibu, courtesy of cinematographer Floyd Crosby, look superb.