All hail Olivia de Havilland, America’s longest living movie star. The more de Havilland pictures we see, the more we admire her taste and judgment in roles… or is that better expressed as, the more we admire her ability to guide a near-perfect career, going so far as to defy the studios in court. This 1941 drama has director Mitchell Leisen in fine form, a smart script by Brackett & Wilder, and a central topic that’s currently quite hot: illegal immigration. 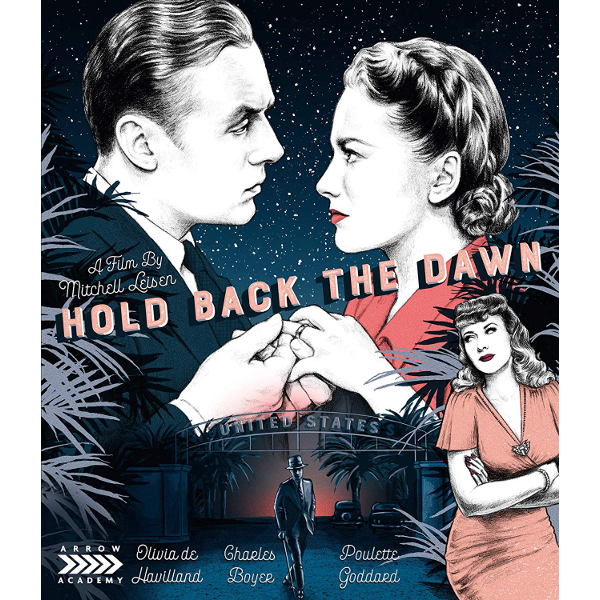 Who says that classic-era Hollywood avoided controversial issues?  Well, everybody says that, and by and large they were correct. Thanks to a crackerjack screenplay by Charles Brackett and Billy Wilder, this look at the immigration dilemma at our border isn’t absurdly blind to the problem of who does and who doesn’t gain entrance to the Land of the Free and the Home of the Brave. Remember how the bluenoses attacked Wilder’s The Apartment for its unblinking look at sordid romantic behavior?   1941’s Hold Back the Dawn is even more cynical, or perhaps simply realistic. By bolstering the moral side of its story, Leisen’s movie garnered six Oscar nominations, including a nod for Best Picture.

Suave Charles Boyer and saucy Paulette Goddard are perfectly cast as a pair of Continental sharpies, former dance partners that have ‘improved’ their lifestyles through feigned romances. Romanian Georges Iscovescu (Boyer) is an out-and-out gigolo, stuck in a dusty Mexican bordertown with a seven-year quota list to enter the U.S.. His slick-chick ex-partner Emmy Anita Dixon (Goddard) vouchsafes the smart way to cross the border — marry an unsuspecting American and than ditch her when residency is assured. It worked for Anita — she has her papers and spends her time fleecing rich Yankees. Georges has been holed up in a hotel room for months, but scores in one night, romancing and marrying Emmy Brown (de Havilland), a schoolteacher from Azusa, California. The plan is to wait the four weeks to enter, bid the lovely, innocent Mrs. Iscovescu goodbye, and split for New York with Anita. Two things get in the way. Immigration Inspector Hammock (Walter Abel) is well aware of immigration scams, and Georges and Anita cringe whenever he approaches. The second problem is even worse: Georges both grows a conscience, and falls in love with Emmy.

At its basis Hold Back the Dawn is a formulaic script given a slick script and sincere performances: a God-fearing good California girl reforms one of those hand-kissing oily European lounge lizards, and everybody competes to see who’s the most noble. Just a couple of scripts away from his writing-directing breakthrough, Billy Wilder wasn’t happy working with Mitchell Leisen for the fourth or fifth time, as Leisen changed his work at will. As a work-for-hire Dawn sees Wilder and Brackett going whole hog with the meet-cute fun and games, even as it’s all revealed as cynical manipulation by Georges. We get bratty American kids with firecrackers, flummoxed Mexicans (played by Russians and Italians) and a curious cross-section of fellow border loiterers, waiting anxiously for delayed paperwork on their visa applications.

To get the obvious over first, Ms de Havilland is terrific, playing sweet but not sappy and overwhelming the cynical Romanian, whose contempt for women is stopped cold by the stark honesty and virtue of the All-American Emmy. Goddard’s Anita is more than a calculating call girl, as she won’t admit that she’s in love with Georges too. Anita is the one to pop the ballon of deceit, and disabuse Emmy of her romantic notions. Of course, Wilder and Brackett’s Love Triumphs All resolution has unexpected weight: Emmy’s character is too deep to react in the way Anita expects. She knows Georges better than he knows himself. 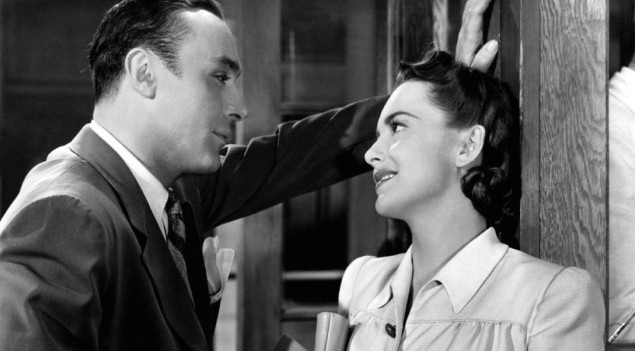 Charles Boyer has a tough assignment — he’s required personify the extreme accented-lover boy that became an exaggerated stereotype — an overly romantic Continental swain who makes bedroom eyes 24/7, an irresistible seducer. Wasn’t Boyer the template for the one-joke cartoon character Pepe Le Pew? In 1941 that image was already out of date; Boyer got top billing but wasn’t nominated by the Academy.

Billy Wilder held major grudges against some people. The famous story (told in shorthand) about Hold Back the Dawn is that Wilder met Boyer in the middle of Melrose Ave. on the way to Lucy’s Cafe (2 blocks from CineSavant central), asked how the show was going, and found out that Leisen had cut one of Wilder’s scenes. When stuck in immigration limbo, Boyer’s Georges was meant to torment a cockroach trying to climb the wall of his room, denying the bug permission to cross an arbitrary crack in the plaster. The earthy moment was Wilder’s way of expressing Georges’ predicament. The haughty Boyer told Wilder that ‘he doesn’t talk to insects’ in movies, as if the scene was unacceptably vulgar (which for a glossy Paramount film was true). Royally incensed, Wilder claimed that he took away some of Boyer’s better lines in the final scenes.

I mentioned that this was a grudge, right?  A year later, directing his first film The Major and the Minor, Wilder made a point, in the very first scene, to have a kid walk up to a magazine stand in Grand Central Station, pull a movie fan mag from the rack, and read the copy on its cover: “Why I hate women, by Charles Boyer.”

Those are old stories, but most everything the wickedly funny Wilder said makes me smile. Then again, I’d hate to hear him criticize ME.

The film’s attitude toward immigration issues is interesting — it’s not completely daft. The average MGM pic will have Jimmy Stewart (or somebody) fall madly in love with a completely illegal alien (Simone Simon or somebody), defy the law in outrageous ways, but end up married with papers ’cause of divine intervention by softies at the State Department. 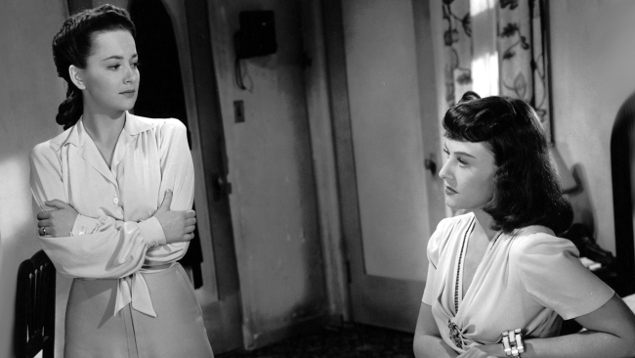 First off, none of the (thoroughly noble and deserving) people stuck in the bordertown are Mexicans or Central Americans. Instead, they are all European exiles, or, presumably, refugees. Yet the movie avoids directly mentioning the huge, awful immigration debacle of the time — for three or four years, refugees were fleeing for their lives as Hitler overran Europe. Erich Maria Remarque wrote books about the tragedy, but only one or two American movies addressed the problem. This was when a group of pre-mature anti-Fascist Hollywood personalities were raising money to get places like Cuba and The Dominican Republic to accept Jewish refugees, a story buried in the press.

Hold Back the Dawn instead simply states that the fine refugees (played by Victor Francen, Curt Bois, Rosemary DeCamp, Eric Feldary, Micheline Cheirel & Madeleine Lebeau) simply love America to pieces. Francen’s professor quotes the inscription on the Statue of Liberty, which Inspector Hammock gets wrong. They’re honest, virtuous and deserving. The pregnant Rosemary DeCamp, after receiving bad news, solves part of the problem by pulling the same trick as would a Mexican woman in the film ¡Alambrista!, 35 years later. The fate of a sad-sack French barber Bonbois (Curt Bois) develops in a way that makes the U.S. State Department come off as a noble charity — the professor finds out something incredible in the barber’s heritage, that affords him a parade across the border.

That scene also makes a gesture toward U.S.-French solidarity, reminding us that France was one year into a four-year Nazi occupation, which goes unmentioned. Also playing safe, and perhaps counteracting the cynical aspects of the story, is Brackett & Wilder’s ‘soft’ scenes extolling the sanctity of marriage and the church, and even the soft-heartedness of Hollywood (a real fantasy). A framing story has Mitchell Leisen playing a film director shooting a show with Veronica Lake and Brian Donlevy, who uses a lunch break to hear Georges Iscovescu’s heart-rending story. Wilder must have closed his eyes and bit his tongue when writing the car accident scene, a passage that reminds us that we’re still watching a glossy, super-soapy potboiler. 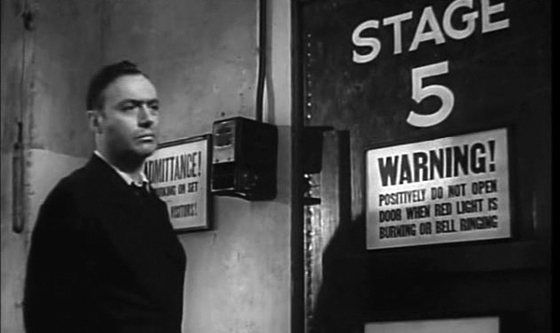 Wilder reportedly spent a time at the border waiting for his visa to come through, trying to improve his English. And he liked to say that in his younger days he scraped by as an eintanzer (one-dancer), a paid companion in dance halls. Wilder was also inspired by hard times living in tiny spaces, trying to write funny scripts in a near-closet, listening to an old toilet flush through a thin wall. That experience may explain why he was so attached to his ‘cockroach’ scene. As soon as he had the authority, he saw to it that nobody changed a line of his dialogue, ever.

Other Wilderisms make us smile — the cheap love gift that (symbolically) causes the accident, the cantina given the name Climax, as in Kiss Me, Stupid. And the un-filmed cockroach scene returned in Wilder’s The Spirit of St. Louis… James Stewart wasn’t too proud to talk to a fly. (Thanks Gary)  But the strongest moment in Hold Back the Dawn is simply seeing Olivia de Havilland take the whole show in tow when Emmy learns the truth of her gigolo husband. Neither Georges’ deceit, Anita’s vicious attack, nor the weight of American immigration law stands a chance. Ms. de Havilland made precious few movies that weren’t successful as entertainment. This isn’t one of her classics, but it’s very high on the list.

Incidentally, the title of the film has long been one of my bad jokes, said whenever people are using too much dish soap in the kitchen.

Arrow Academy’s Blu-ray of Hold Back the Dawn is a fine-looking encoding from Universal. For those not in the know, in the 1950s MCA purchased almost all of Paramount’s pre-1948 film library, outright. Most of the ‘deep vault’ holdings likely did not survive, which is why some censored pre-Code productions no longer exist in full versions. This prestigious Mitchell Leisen show has been retained in great shape. Leisen didn’t make the cut imposed by Auteur critics, and only in the last twenty years or so regained full acceptance as a master filmmaker. Scholar David Chierichetti tipped me off to Leisen early on … the director’s Remember the Night has lately been revived as a major Christmas movie. Leisen’s Death Takes a Holiday hits Blu-ray on July 23; I wish someone would release his The Mating Season (1951), which I remember being very good.

Leo Tover’s cinematography makes maximum use of a large exterior set that uses a number of attached rooms — the whole thing may have been jammed onto the Paramount lot. A downtown hospital makes an impressive location and Agoura stands in for rural Mexico. Arrow puts effort into its extras. Adrian Martin contributes a polished commentary. He’s done over sixty talk-tracks, and they’re always good. Geoff Andrew hosts a Criterion-like video appreciation, and Olivia de Havilland appears in a lengthy 1971 audio interview in front of an audience at the National Film Theater. A radio adaptation follows, as well as an image gallery.