RKO’s morale-building wartime thriller adds an element of sexual perversion to its story of Nazi crimes against children, thus creating one of the studio’s all-time biggest hits. Bonita Granville is the victim Tim Holt her Nazi-youth heartthrob, and Otto Kruger provides the perverted sneers. 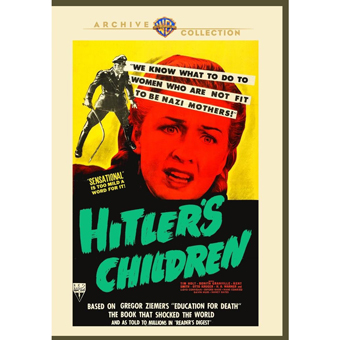 Perhaps the most popular anti-Nazi info-propaganda thriller of the war, Hitler’s Children is a very well made shocker that skirts the limits of what the Production Code would sanction, even in the cause of educating Americans to just what kind of nasty stuff was going on in Germany. RKO released this show early in January ’43, and followed it with the Disney animated short subject Education for Death: The Making of the Nazi, both of which had the same book source. Hitler’s Children is an ideological horror tale to (righteously) demonize Nazi policy. Plenty of studio films had already stressed the cruelty of the Germans and the barbarity of the Japanese Army, and a few would deal the sex card, fueling viewer emotions by implying that the enemy raped or otherwise despoiled innocent women. 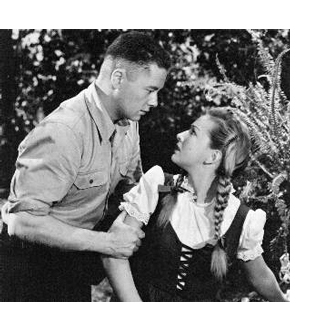 Hitler’s Children goes that formula one better by making characters played by beloved youthful actors into victims of Nazi tyranny — and perverse lust. Future TV producer Bonita Granville was well known as the star of a quartet of Warners’ Nancy Drew adventures; she was the picture of innocent, spirited young America. At 24, Tim Holt was a popular star of charming, uncomplicated westerns, where he always played fair and rarely if ever kissed the girl. The moment these two are put in harm’s way, all America became concerned.

The screenplay by Emmet Lavery spells the problem out as a pure case of Nazi evil. Hitler’s Germany has abolished social freedoms we hold dear by injecting the State into the basic family unit. In Berlin, ‘The American School’ is across a path from the ‘Horst Wessel Schule’ for Hitler youth. Yankee teacher Professor Nichols (Kent Smith) objects to the brawls between the separate groups on the playground, but the ideology-spouting Hitler Youth counselor Dr. Schmidt (Erford Gage) encourages them. Already a fanatic at age twelve, young Karl Bruner (Tim Holt) nevertheless has a soft spot for Anna Miller (Bonita Granville), an American of German descent. The trouble really starts when new laws compel Nichols to expel unacceptable minorities and Jews, and turn over German children to the guidance of the State. The Nazis seize Anna and put her in a youth training camp. The newly commissioned Lieutenant Karl Bruner blocks Nichols’ efforts 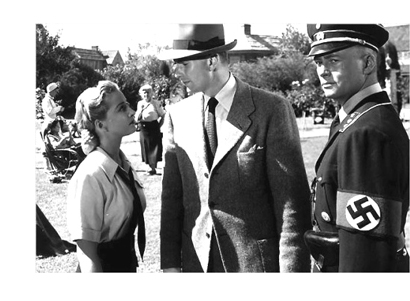 to help her escape. Anna puts up resistance to becoming a good Nazi girl, as she will be expected to bear the children of officers and give them up to the State to be reared as future soldiers. As Karl is in love — an emotion he must hide from his superior Colonel Henkel (Otto Kruger) — he covers for her as best he can. But even with Henkel’s backing, Anna’s disobedience comes to the attention of the harsh Dr. Graf (Hans Conreid), who wants Anna sterilized and imprisoned, so as not to be accused of leniency later on. Dr. Nichols can’t help and neither can Karl — but something has to give.

Hitler’s Children is an entertaining thriller — with the help of the two young stars as identification figures, audiences surely came to an understanding of Nazi totalitarianism. Young Anna recites patriotic American speeches and offers sentiments for a peaceful Europe. Although he looks a little silly playing a pre-teen, Tim Holt’s innate sincerity makes for a Hitler Youth far more interesting than the norm. He’s no idiot, like the silly boyfriend-informer in The Sound of Music. All Karl wants to be is a Good German like his father. Only by seeing things through Anna’s eyes does he become torn between his personal values and those of the State. 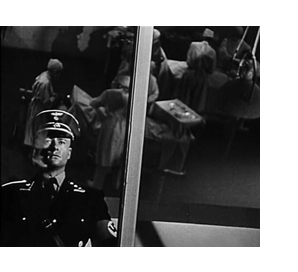 Interestingly, Anna’s cute speeches about a future of communal equality, teamwork and harmony would seem an example of the only real influence of leftists on Hollywood filmmaking – they’re very much of the little ‘better world’ homilies Dalton Trumbo was writing into scripts. Future Hollywood Ten director Edward Dmytryk takes the opportunity to sketch the Hitler Youth school program with visuals adapted from Leni Riefenstahl. The RKO optical and effects department provides images of a mass rally, and staccato cutting patterns give us portraits of boys Sieg Heiling in rigid cadence. The unhealthy-looking Erford Gage (the unhappy poet of The Seventh Victim) gives forth with the poisoned Nazi oratory. Later on, Dr. Nichols’ tour of the facilities for female wards of the State shows us an assembly-line operating room for forced sterilizations. This must have had an impact on audiences in 1943, seeing that motherhood was considered a sacred concept, and sterilization as taboo a film topic as abortion or breastfeeding. When Karl warns Anna that she’ll be neutered if she doesn’t toe the party line, she says she’d rather give no children to the rotten Reich anyway.

The film reserves its nastiest moments for Karl’s boss Henkel. Otto Kruger plays the Colonel with a sick grin, as if he personally deflowers every new mother for the State. Actually, in 1943 terms, Kruger’s sneer might decode as homosexual evil, relishing the thought of any outrage perpetrated on the female sex. The more restrained the details, the more repressed the situation becomes. To the credit of Hitler’s Children, few if any howler dialogue lines stick out. It’s all pretty much under control. 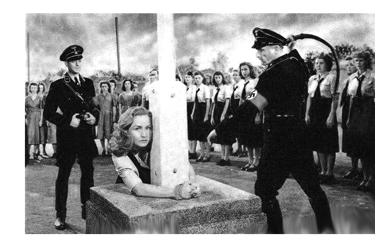 The church puts in an appearance when an escaped Anna takes refuge in a Mass being given by a Bishop (played by silent movie star H.B. Warner, Cecil B. DeMille’s Jesus). The slimy Nazi bureaucrats don’t punish the treasonous Bishop, boasting instead that he’ll become irrelevant when church congregations are worshipping Hitler instead.

That’s accurate enough to the Nazi plan, but the film’s central image is pure sensationalism. Anna is sentenced to ten public lashes. She’s tied to a post before a grim assembly of Hitler youth under RKO’s overused stormy sky cyclorama. Answering the wishes of daydreaming sadists born too soon to freak out over Dyanne Thorne movies, a Storm Trooper rips the back from Anna’s shirt so that she can receive the lash, mooo ahh ha ha ha. And poor Karl must witness the ritual. RKO featured the spectacle in much of its advertising. Their ballyhoo taglines included the gem “We Know What To Do To Women Who Are Not Fit To Be Nazi Mothers!”  Even more accurate might be, “PATRIOTIC!” “REVEALING!” “KINKY!” 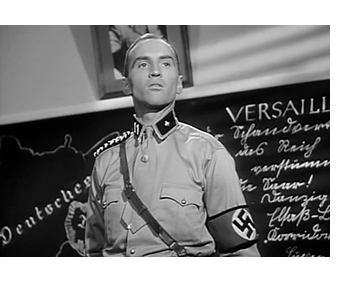 As pictured in the movie, the totalitarian State is indeed an insane nightmare of twisted values. The screenplay wisely depicts the notion of German Efficiency creating a bureaucratic sense of order-in-madness. Everything is official, including the acts of cowardly functionaries protecting their tails. Dr. Nichols befriends a sweet little man who shares his love for Goethe – and who serves to explain why it’s too late for ‘good Germans’ to stop the Nazis.

Although we see a sizeable cast in good uniforms, and some satisfactory German-ish vehicles, Hitler’s Children is a budget affair right down the line. Houses and neighborhoods are the standard RKO Americana back lot. Homey porches are covered with ivy in a weak attempt to look less like what they are. The passive contract player Kent Smith is a good choice for the lead role, as audiences don’t expect him to behave like a cardboard hero. Seventeen year-old Nancy Gates must have had an excellent agent, for the strikingly beautiful actress scores a screen credit, yet is recognizable in just one shot and one line of dialogue. The bit players surely come from the same RKO extras pool that Val Lewton dipped into — I think I recognized a young actress from Youth Runs Wild. One history of the Lewton pictures reports that actor Erford Gage (above left) enlisted in the Marines as soon as he finished Hitler’s Children and The Curse of the Cat People. Barely a year later Gage was killed, some sources say in the Philippines and others at Iwo Jima. The Seventh Victim becomes even more haunting when we know that its ‘weakling poet’ volunteered to be a combat warrior. 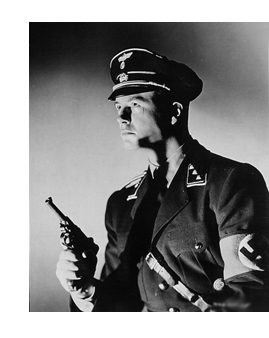 It’s unclear if Hitler’s Children was a boost for the career of Edward Dmytryk, but being the director of RKO’s biggest hit of the year couldn’t have hurt. He’d do another ‘sensational’ war crimes exposé, Behind the Rising Sun, and then move up to his string of successes under Dore Schary, before coming in conflict with the blacklist. Hitler’s Children is a key film in the understanding of wartime filmmaking — entertainment carefully crafted to keep the public’s mind on what we were fighting for.

The Warner Archive Collection DVD-R of Hitler’s Children is in fine shape. Even though it was one of RKO’s most popular releases, only a couple of brief passages seem slightly soft or dirty. The image is sufficiently sharp to appreciate Tim Holt’s tortured expression — it’s tough being a Nazi in love. The conflicted Karl Bauer is a long way from Holt’s series western roles, charming audiences with his apple-pie smiles. Having seen a wide range of Tim Holt’s work, I’ve grown to appreciate him more. Film fans that haven’t seen Treasure of the Sierra Madre may know him only as the one-note George Minafer in Orson Welles’ Magnificent Ambersons.

Roy Webb’s score this time seems fully original. By now I’m accustomed to detecting recycled Webb cues in Val Lewton movies, ‘Falcon’ movies, what have you, but this score seems all of a piece.