Sheltered in my Los Angeles bubble, I can’t believe that this crime movie had an accurate measure of the true pulse of the country. Texan outlaws rob banks to fight what appears to be a rigged system; the Texas Ranger who tracks them realizes that much of the population feels the same exact way. Jeff Bridges, Chris Pine and Ben Foster lead a crime spree through a depressed, forgotten America. 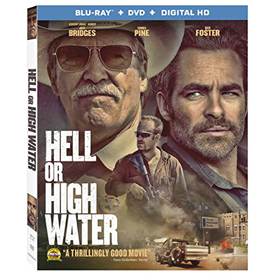 Someone nominate actor/screenwriter Taylor Sheridan for public office: between this movie and the excellent Sicario (2015), he seems to have good handle on what’s griping the ‘forgotten’ America, the people that revolted in last Tuesday’s election. Like Sicario, Hell or High Water functions first as a seamless, tightly scripted crime thriller. The issue here is not the Drug War, but the abandonment of what was once an American middle class. Basically a ‘Jesse James’ story of desperation and hopelessness, Hell or High Water expresses the frustration and rage of people that no longer believe that the economy is working on their behalf.

This is one politically prescient movie. I don’t recognize the titles of any of director David Mackenzie’s films, but he’s got a solid credit here. Hell or High Water has everything to be a hit. It’s a suspenseful crime film with credible situations and believable, non-hyped violence. It has amusing secondary characters and a sympathetic leading performance in Chris Pine, the movies’ new Captain Kirk. Story-wise the closest another movie comes to this show is the Coen Bros.’ No Country for Old Men. The approach and tone are entirely different, even if the characters are almost as desperate. 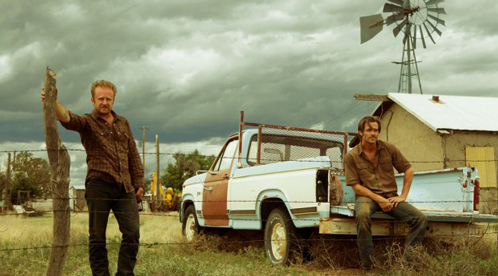 Like practically everybody else in his part of Texas, rancher Toby Howard (Chris Pine) is about to lose out to the Texas Midlands Bank, which has led him down a path of loans that guarantee that he’ll default. This is bad news, as Toby’s family has all but disintegrated. His wife has left him and taken his two boys, and he hasn’t seen them in almost a year because he can’t make his child support payments. In a last-ditch effort to reverse his situation, Toby has asked his ne’er-do-well Brother Tanner (Ben Foster), who has recently come out of a long prison stretch, to help him rob Texas Midlands branches, to pay the bankers back with their own money. The robberies go well for the most part but Tanner is enough of a loose cannon to make success unlikely. Tanner is dedicated to helping his brother but has no illusions about what they’re doing. All they can hope is that they can get enough money so that Toby can stay in the clear. The thieves launder their winnings in a casino. On their case is a pair of veteran Texas Rangers, all-but-retired Marcus Hamilton (Jeff Bridges) and Alberto Parker (Gil Birmingham). Together they figure out the pattern of the thieves’ crimes. They even decide that one of the crooks is slightly insane, when Tanner impulsively robs a different bank by himself, while Toby is in a coffee shop across the street, unaware. Does this reckless crime spree have a chance of paying off?

It’s true — Hell or High Water is a Trump Western. It’s a social conscience film based not on liberal ideals but the realities that have resulted in a destructive national rebellion. Everywhere the brothers drive we see signs offering land for sale, and bank-initiated ads offering predatory loans. Normally speaking, in a crime film about rural bandits we play the guilty game of siding with the crooks as they have a blast doing things we’d never dare do. We quietly feel good because we have more options than they do. It’s no longer enough to tell so-called ‘losers’ in the economy that it’s entirely their own fault, because all they had to do is get an education and take on some kind of profession. It’s also true that people are being squeezed, and badly. 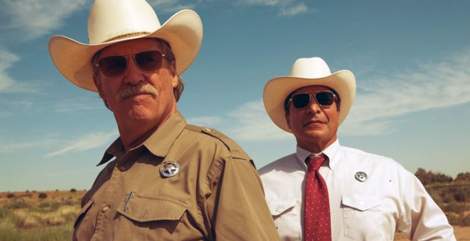 The tension in crime films about rural bandits comes when we identify with the bandits, ‘bad’ people. Speaking for myself, as soon as the thieves put ordinary citizens in danger, I go on the ‘shoot ’em down like dogs’ list. But Toby in Hell or High Water is different. He’s not a liberal ‘Henry Fonda’ outlaw, the innocent victim that makes socially perceptive speeches before being wiped out by ‘The Man.’ Toby is more like Gary Cooper or Robert Ryan. He feels that he has no choice in what he’s doing, and he’s nobody’s fool. Even when doing bad things, Toby tries to behave in a civilized manner.

The movie isn’t exactly naturalistic. Toby and Tanner are good-looking, funny and capable guys, not the reckless malefactors that really rob banks. If some of them do it with the idiotic notion of ‘saving the homestead,’ I doubt that they follow through on that idea. Career crook Tanner is romanticized in that he’s sacrificing himself for his brother. Their childhood was a mess, and the movie hints that the Evil Economy had a hand in that too. Despite the violence, Toby and Tanner’s robberies don’t turn us off. They aren’t ‘cute’ like Bonnie & Clyde, and they aren’t shooting people left and right. They’re ‘comfortable’ even after a killing or two. Various encounters would seem to reflect on older ‘takes’ on rural banditry. Two punks at a gas station may be ready to blow away any hippies that might wander down from Colorado, in the style of Easy Rider; our farm-fed heroes make short work of them. A brief Sugarland Express– like motorcade of pickup trucks doesn’t work out either: Tanner opens up with a machine gun and they turn tail. 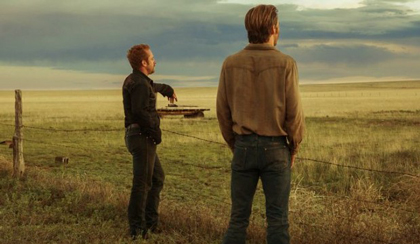 It’s still disturbing to me that the movie endorses the wild west notion that every male Texan is armed to the teeth, and offering to assist Jeff Bridges’ Texas Ranger in blowing the bank robbers to bits. None are drunk, all are in control. The movie avoids showing anti-Obama signs, but is pro-gun all the way. Do property owners routinely greet lawmen while brandishing weapons?

But there are subtle anti- PC jabs. Most of the cute content is shared by Jeff Bridges and Gil Birmingham’s easygoing Texas Rangers, who solve the crime in between exchanging smart remarks. Bridges’ Marcus baits Gil’s Alberto with a constant litany of Injun jokes, that Gil puts up with. See? What’s the big deal about a few ethnic jokes? [Give me a few thousand words.] The two men bicker but are intensely loyal to each other. They’re also polite to the waitress and witnesses that got a good look at Toby Howard but refuse to cooperate with them or give a reasonable description. In this aspect Hell or High Water would seem to be tapping the pulse of the forgotten America: ordinary folks would rather side with thieves and outlaws than lift a finger for anything resembling law or the government, even the Texas Rangers. For that matter, even Gil and Marcus regard The Midlands Bank as the villain. Near the end we see that a woman Texas Ranger has inherited Marcus’s desk upon his retirement. Ranger headquarters isn’t a folksy lodge, but a modern glass skyscraper. Yep, Evil is coming at the forgotten American from all directions. 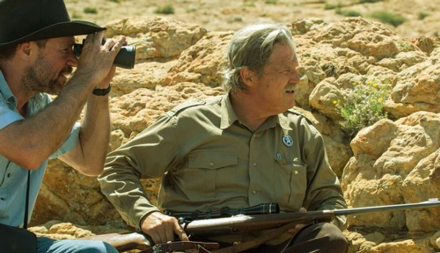 David Mackenzie’s direction covers things well enough. The only affectation I noticed is his apparent inner need to end outdoorsy shots with slow upward crane shots. Does this help make Tanner and Toby into old-fashioned western antiheroes, or is Mackenzie just possessed by the ghost of director Delmer Daves? When the last crane shot loops UP and then DOWN in to a field, it’s as if Mckenzie is suggesting that the Howards’ way – something really radical – is what will restore the Real America.

The movie plays its end game beautifully — no spoilers here. It certainly isn’t the cosmic downer and Antonioni-like puzzle that is (the excellent) No Country for Old Men. Just two things need to be asked: if the Howard property has oil, why can’t Toby make a deal for it? Does his mortgage give those rights to the Bank? Or is the movie saying that the Bank and the Oil Companies are in cahoots to squeeze out the little guys? A more radical movie would make that claim.

I surely share one observation with every viewer of Hell or High Water who has seen it in the last month or so. In the casino, when Tanner is running amuck, he scares a hooker away from Toby by assaulting her at the bar, apparently grabbing her by the crotch, or worse. If that isn’t a spooky serendipity between the movies and modern history, nothing is. 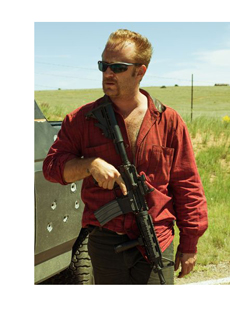 Lionsgate’s Blu-ray + DVD of Hell or High Water is the expected slick encoding of this widescreen picture. We’re constantly entertained with plenty of wide-open Texas vistas, in between the images of roadside economic meltdown.

The show comes with three making-of featurettes, a video from the premiere and a filmmaker’s Q& A. It has a Spanish track and English & Spanish subs as well. The disc was released on Election Day. Watching it two days later, I could re-title it, ‘Salt in the Wound.’

Did the filmmakers purposely release no images of the Howard brothers in their ski masks, aiming guns at people? Most shots see them standing around the homestead, like modern Tom Joads. But we do see Tanner hefting his rifle in the approved, arrogant ‘open carry’ manner.