Indicator delivers another in their long line of fan-friendly box sets with Hammer Volume Five – Death and Deceit (a subhead that could be applied to the majority of the studio’s output). This latest release would be for Hammer completists only were it not for the extras that shine a bright light on a few overlooked artists and their work. 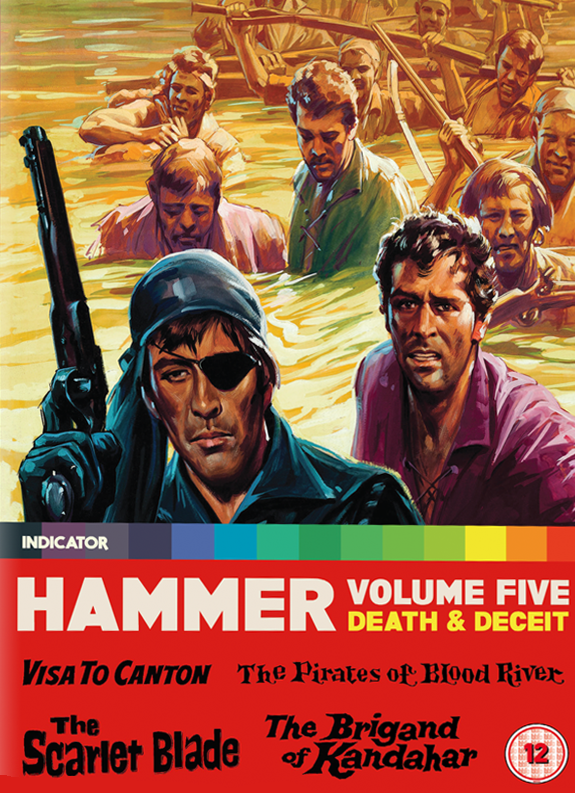 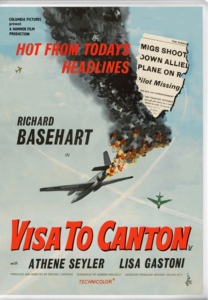 Michael Carreras’s Visa to Canton was a Cold War thriller photographed in Technicolor but released to U.S. theaters in black and white. To add insult to injury it was given a new and even more prosaic title: Passport to China – a fate this unassuming little Cold War thriller didn’t deserve.

Richard Basehart plays Don Benton, a travel agent in Hong Kong who’s approached by the CIA to track down a missing aircraft – when he learns the identity of the pilot in question he finds himself in the middle of Communist China up to his neck in Russian spies and femme fatales.

Basehart is no one’s idea of a two-fisted action hero no matter how much Edwin Astley’s jaunty soundtrack tries to convince us – his adventures seem more like a more sophomoric episode of Patrick McGoohan’s globe-trotting Danger Man (not coincidentally scored by Ashley) and the Hong Kong locales only enhance the comparison (it was the first Hammer production in which two films benefited from the same exotic locations – Anthony Bushnell’s The Terror of the Tongs was produced alongside Visa using many of the same cast and crew members.)

Carreras’s film never takes itself too seriously and the presence of Bernard Cribbins, Burt Kwouk (The Pink Panther’s Cato) and Athene Seyler as Basehart’s surrogate Chinese grandmother add to the playful atmosphere (Seyler’s oddball casting is a special case of cognitive dissonance – she’s best known for playing the doting mama of the satanic Julian Karswell in Jacques Tourneur’s Night of the Demon.)

Indicator’s transfer of Arthur Grant’s cinematography does the best it can with a sub-par print – it’s a bit grainy and occasionally soft. Also missed are Grant’s beautiful manipulations of shadow and color (seen to best effect in The Curse of the Werewolf and Paranoiac.) 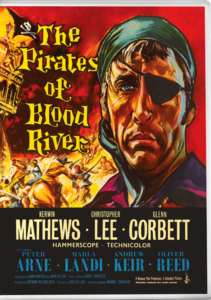 Kerwin Matthews and Christopher Lee star in John Gilling’s landlocked adventure The Pirates of Blood River which thanks to a bare-boned budget plays out on dry land. Matthews is Jonathon Standing, a young lech sentenced to a prison camp by his bible-thumping father and Lee plays the black-clad, one-eyed LaRoche, a French captain who frees Matthews from the penal colony only to put him back in irons for conduct unbecoming a proper pirate.

Gilling’s lackadaisical time-killer has the feel of one of Universal’s bottom-of-the-bill horrors in which the burden is on the contract players to liven up the party. The Blood River stalwarts include Andrew Keir as Matthews’ fire-breathing father, Oliver Reed as a sea-faring juvenile delinquent and two of Hammer’s most desirable pin ups, Marla Landi (the duplicitous Cecile of Hound of the Baskervilles) and Marie Devereux (one of the more zaftig bloodsuckers in 1960’s Brides of Dracula). Michael Ripper is aboard too and he’s assigned the lion’s share of scenery chewing, constantly bellowing “Ahoy, Matey!” as if he were plucked from a community theater production of Treasure Island.

After the black and white indignity heaped on his work for Visa to Canton, Arthur Grant’s photography for The Pirates of Blood River is given a chance to shine on Indicator’s Blu ray – his colors are vivid and the widescreen imagery is sharp. 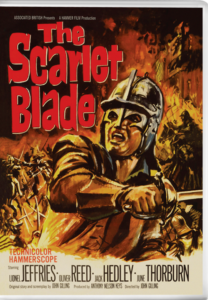 Lionel Jeffries plays Colonel Judd, the brains behind a band of parliamentarians who kidnap Charles I in an effort to tilt the balance of power in 17th century England. Judd’s scheme runs up against his own daughter (played by June Thorburn) who works with a covert crew of Royalists led by a low-rent Robin Hood figure, Edward Beverly, also known by the snappy moniker, The Scarlet Blade. Played by the  humdrum Jack Hedley, Beverly’s nickname is the only snappy thing about him.

Michael Ripper and Suzan Farmer are among the Hammer notables in the supporting cast but in many ways it’s Thorburn’s picture – covering her golden mane with a brunette wig she’s a commanding figure who stares down her unscrupulous father while deftly aiding and abetting the good guys in their patriotic exploits.

Indicator’s transfer gets the most out of Jack Asher’s cinematography – his work on The Scarlet Blade literally pales in comparison to his kaleidoscopic lighting for The Brides of Dracula and The Man Who Could Cheat Death but the British countrysides are lovingly evoked. 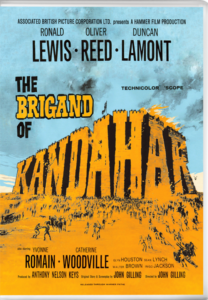 John Gilling excelled in costume dramas whose protagonists were bound by the superstitious majority and the aristocratic few – a toxic combination that gave his mid-career work like The Gamma People and The Plague of the Zombies a lasting power. 1960’s The Flesh and the Fiends, the story of a kindhearted physician with blood on his hands, was Gilling’s masterpiece in that mode. Set against a backdrop of social injustice and class warfare in the 19th century, the film was a bracing mix of Charles Dickens and Mary Shelley and it showed Gilling at his most coldblooded and compassionate – thanks in no small part to his chilling recreation of an impoverished Edinburgh and Peter Cushing’s performance as Robert Knox – a man who embodied Jean Renoir’s maxim – “The awful thing about life is this: everyone has their reasons.”

In 1965 Gilling dreamed up a similarly compelling story for an unassuming action picture that might have been the equal of his Scottish tragedy – an Afghani adventure about a half-caste Bengal Lancer court-martialed for his role in the death of his lover’s husband. A sticky wicket to be sure, leading the Lancer, an officer named Case, to reject his comrades and join forces with the Sikh warrior Eli Khan (played by Oliver Reed) and his brigands. 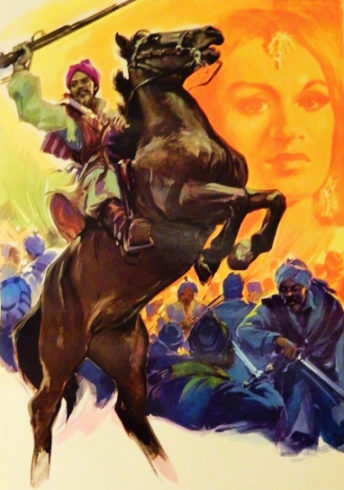 Racial animus, sexual intrigue and betrayal set down in the middle of the Anglo-Sikh war should have been the perfect recipe for dramatic fireworks but The Brigand of Kandahar is a pedestrian hash of soap operas and horse operas. It’s not helped by Ronald Lewis who disappears under his turban in the pivotal role of Case (plus the awful makeup suggesting his mixed parentage is not only racist, it changes alarmingly from scene to scene). Lewis is doomed anyway the moment he ventures near Reed who takes effortless command of the camera – though Reed’s makeup is equally suspect – he resembles an undead Omar Sharif.

The usually blank-faced Yvonne Romain is the surprise here – she shows a lethal talent for palace intrigue and was never so beautiful – playing a double-crossing villainous appears to agree with her. 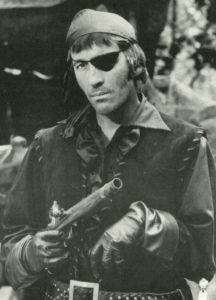 Indicator positively shines when it comes to producing extra material for their Blu ray releases – mini-documentaries, actor and composer profiles, promotional items, all presented in an comfortably laid back manner, a kind of low-fi Criterion.

Notable extras for Hammer Volume Five include an overview of John Gilling’s career by Kim Newman, profiles of Yvonne Romain, June Thornburn, Lisa Gastoni and Marla Landi and a deep dive into Edwin Astley’s film scores from musician David Huckvale. Each film has its own “making of” feature along with voluminous still galleries and other promotional material.

The box comes with a 36 page booklet featuring original essays, more promotional material and various Hammer odds and ends. You can find the complete rundown of extras and technical specs here at Powerhouse/Indicator’s site.