It’s a spooktacular reboot with nothing we haven’t seen before — but the jokes are good and the comediennes form a welcome ensemble. You’d think that this one would have been committee’d and PC’ed to within an inch of its proton packs, but the personalities make it entertaining. 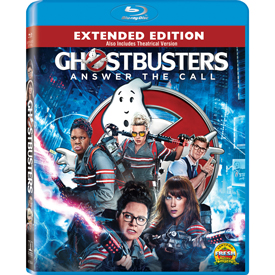 It took awhile… since the 1980s the standard for TV commercials has been ‘stupid man’ + ‘smart woman,’ and ever since Brad Pitt in Thelma & Louise, men have taken precedence as the on-screen sex objects, the ones that most often take their clothes off in mainstream features. I think that period hairstyles have reversed as well — narcissistic are more likely to have anachronistic hairdos.

Last year we had a Star Wars sequel that essentially re-ran the entire storyline and format of the first three installments, rebooting the franchise but anchoring it in the same-old same-old. I saw it new, in 3-D, and nothing about it has stuck in my memory. This year’s reboot of the big 1984 comedy horror hit Ghostbusters does something similar, but with a key difference — the gender-swap has resulted in a hybrid horror comedy / empowered chick flick epic. The original male ghost-busting comedy dealt was a male-oriented affair, with a slinky succubus from hell, and one music montage that made a joke of supernatural oral sex. Everyone notes that this reboot replaces cute receptionist Annie Potts with the dumb hunk played by Chris Hemsworth, but there’s more going on here than just that. It’s ladies’ night at the movies — all four are accomplished comediennes and they and nobody else are in charge. 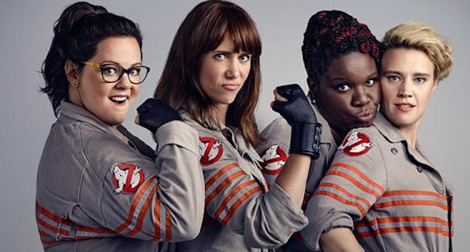 The new 2016 Ghostbusters (video adds Answer the Call) plays things smart, commercially speaking — it’s a soft PG-13. Maybe steering the comedy away from raunch doesn’t quite represent the cutting edge of standup these days, but it certainly makes the new Ghostbusters more endearing. Outside of an anatomical observation or two there’s no overt sex content at all. There’s also nothing at all scary about the horror content, unless Scooby Doo puts your nerves on edge. A big comedy from the summer, the reboot’s only downside was political — last summer, upset fans protested that an original-case ‘Ghostbusters 3’ was Out, and an all-female film was In, which opened the door for some ugly racist and sexist aggression online. Ernie Hudson in the original Ghostbusters wasn’t a token, but he was something of a PC-aware addition. In this post-PC reboot, comedienne Leslie Jones is an equal participant in the ensemble.

Considering all the studio strategizing and calculation that went into the new Ghostbusters, it comes out exceedingly well. The plot and the horror content are strictly ho-hum, even with acres of beautifully designed and executed ghosts, wraiths and spirits. I especially like the amazing colossal spooky ghost taken right from the old logo, complete with saggy wrinkles. One persistent winged goat-demon looks remarkably like a Dante Gremlin. The impressive CGI marvels are all top-class work.

Booted from academia because of her authorship of a book on paranormal science, Erin Gilbert (Kristen Wiig) teams up with co-author and old pal Abby Yates (Melissa McCarthy) and Abbey’s collaborator, atomic engineer Jullian Holtzmann (Kate McKinnon). The object: to try to catch a ghost and prove their wild theories to the world. Subway employee Patty Tolan (Leslie Jones) brings a hearse as a new Ghostbuster-mobile, and the four set up shop above a Chinese restaurant. Almost immediately they’re taking on a new spate of ghost disturbances. The mayor (Andy Garcia) tries to make the scientists cease and desist, but they detect a new ectoplasmic threat in the form of Rowan North (Neil Casey), a bitter nerd who has read up on Erin and Abby’s theories, and found a way to open a gateway to the ghost world.

The movie is really all comedy, generated by a cute script in the hands of a quartet of dynamic personalities. At first the comedy doesn’t hang together particularly well, as the individual characters are established. Kristen Wiig initially isn’t particularly sympathetic in and of herself. Her put-upon academic does this ‘I’m talking about my problems but it doesn’t really matter because nobody’s listening to me’ routine, an SNL-type skit that’s all concept and no laughs. Likewise Melissa McCarthy’s self-contained testy imp act doesn’t ingratiate us to her. But all that changes as soon as the women interrelate. Not even the tone of narcissistic, insult-driven post-ironic humor can dampen the affection and camaraderie between the women, especially McCarthy and Wiig. As she’s burdened with most of the tiresome pseudoscientific hardware descriptions, Kate McKinnon at first seems just a collection of poses and smiles. But her brand of femme hip soon blooms as well, and she becomes the competent, self-assured outsider commenting on the other two. Leslie Jones is just marvelous: independent, untamed and equally bright, she’s also the warmest personality of the four. She’s not ghettoized as having ‘street smarts’ or by being more sexually potent in any particular way. All the women have sass, and Jones just brings her own brand.

Okay, but is Ghostbusters worthy of this quartet? It’s good enough. Their interactions with the film’s de-macho-ized men — the emasculated delivery boy, the prissy hotelier, the insulting federal agents — don’t go much further than opportunities for joke put-downs. There’s a great deal of fun in their interaction with Chris Hemsworth’s Kevin, their boy-bimbo receptionist. The film also goes in for a few big stylistic moves, as when a hundred possessed agents and disaster personnel are made to do a disco dance under Kevin’s direction. These don’t quite achieve the excitement of the first movie, which enjoyed making the Ghostbusters unofficial greeters for the greater Manhattan district.

There’s more of a range with the supporting women characters, with only the patronizing federal agent being an outright villain. Yet the girls don’t give her the humiliating treatment doled out to her counterpart in the first movie, William Atherton. This leads me to guess that the franchise scheme wishes to continue using the Mayor’s office and the Federal agents as a running gag, always insisting that the Ghostbusters’ good civic work remain in doubt.

The plot points about the nerd villain’s scheme and the giant X formed by the Manhattan hauntings isn’t all that compelling, so it’s good that we have these funny women to keep Ghostbusters energized. I watched the Extended Version, which adds almost 18 minutes to the theatrical running time. The pace didn’t drag for me, and it’s possible that the new content is some of the additional character detail that I enjoyed. For instance, the Extended cut appears to add actress Elizabeth Perkins to the cast list.

A fat list of cameo appearances are stuffed into the picture, but they’re all well integrated. For some reason I didn’t even recognize Dan Aykroyd. I hope they haven’t permanently killed off the Bill Murray character.

Am I wrong in thinking that this is a bold commercial step, grafting a female ensemble comedy onto an existing big-ticket franchise? In this case it certainly works. 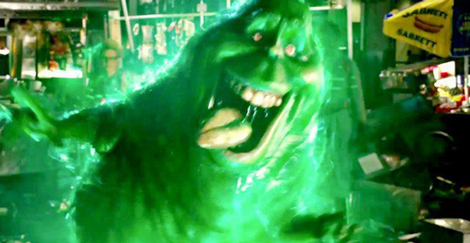 Columbia Pictures/Sony’s Blu-ray of Ghostbusters comes in various editions, some of which appear to be exclusives for big-box stores — steelbooks from Best Buy, Target and Walmart. The version I was sent combines a Blu-ray disc with both versions and a digital download option. The work that goes into these studio products must be enormous, if only on the QC level — there are so many versions, audio tracks, subtitle tracks, commentaries and featurettes to be properly encoded to play on various machines. The disc is also available in UHD and in Blu-ray 3-D.

One clever technical trick to talk about: I was impressed by various ghosts and other effects that extended above and below the 2:39 image, into the letterboxed black area. I remember an earlier theatrical 3-D feature that purposely window-boxed the entire image, so that objects intended to project into the audience could break the frame line in this way, and enhance the illusion. I wonder if that’s what is being done here. A look at the IMDB shows that the aspect ratios and delivery methods for this new Ghostbusters vary wildly depending on how it was viewed — in normal projection, in 3-D, in Imax. The aspect ratio on the Blu-ray appears to change for a scene or two.

Sony gave Ghostbusters a powerful media push, and the extras on this disc might set some kind of a record. They’re listed below: two commentaries, gag reels, deleted scenes, alternate scenes, joke featurettes, featurettes on the effects, a nostalgic piece on the old movie, a piece on Chris Hemsworth’s character, plus galleries of every stripe. I normally keep away from CGI effects featurettes, as they destroy what’s left of one’s suspension of disbelief. As can be presumed, the four comediennes and Hemsworth take every opportunity to display their personalities for the featurette extras… which should tickle their fans the right way. This release certainly doesn’t need a critic’s recommendation to reach an audience. It’s enough to assure buyers that there’s no bad technical news. I thought it was fun, too.

(Thanks to Gary Teetzel for steering me away from some big errors, here.)