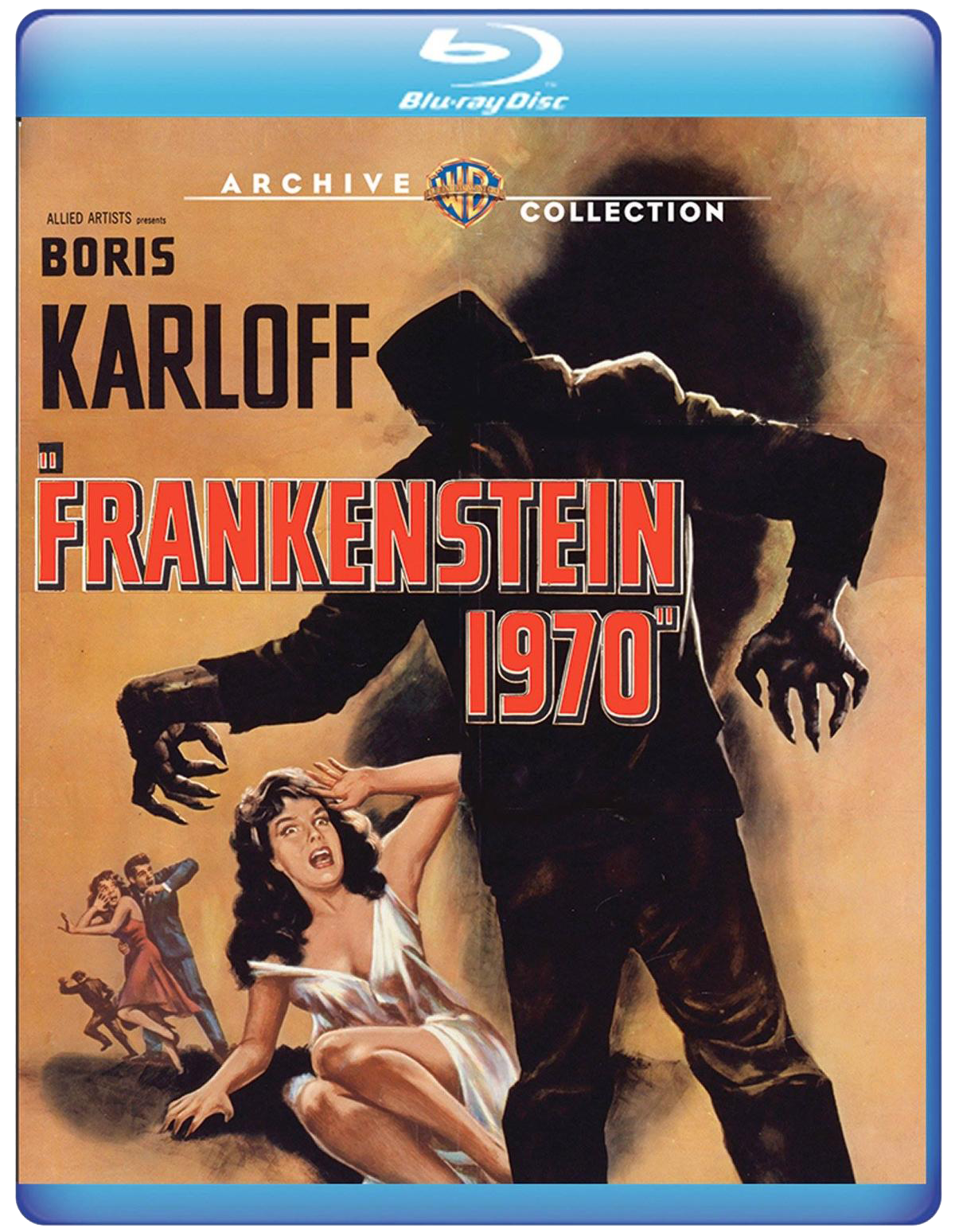 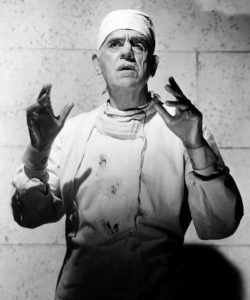 Color TVs, swimming pools and cars (especially cars). American culture of the 50s was fueled by desire for the newest status symbol – even the title of the latest monster movie was pitched to the upwardly mobile – get behind the wheel of the atomic powered Frankenstein 1970. Take a look under the hood though and apart from a few modernistic bells and whistles (most notably its CinemaScope framing) director Howard Koch’s movie is doggedly retrograde. The swooning ingenues, skeptical villagers and dank dungeons – all would have fit comfortably in a Universal horror film of the 30’s. The movie’s real attraction is a more than welcome blast from the past – Boris Karloff returns to Mary Shelley’s monsterverse for the first time in fourteen years.

Karloff (or as the movie’s trailer bellowed, “Karloff, Karloff, KARLOFF!”) plays Baron Victor von Frankenstein, a cash-strapped scientist swinging open his castle doors to a movie crew and their cameras (the foreboding set was first glimpsed in that same year’s biopic, Too Much, Too Soon, about John Barrymore’s  star crossed daughter Diana). 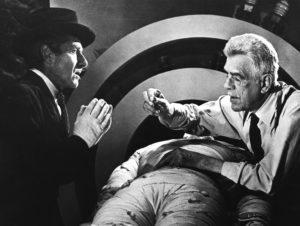 Former cowboy star Don “Red” Barry plays the director Douglas Row, a conceited skirt-chaser who seems to be making up the film within the film as he goes along – though Godard he ain’t, spending most of his time canoodling with a stacked starlet while neglecting his day job, a docu-drama based on the history of Frankenstein and his creature. Row is closer to the legend than he suspects – hidden beneath the castle is a compact laboratory where the Baron’s pet project, a towering corpse wrapped head to toe in bandages, lies in wait for reanimation. Bowing to current events (at least the current events of 1958), an atomic reactor has replaced Kenneth Strickfaden’s phantasmagoric equipment built for Karloff’s own resuscitation back in 1931.

Von Frankenstein’s experiment doesn’t really get off the gurney until the determined doctor begins to harvest fresh body parts from the film crew where his first victim is Row’s ex-wife, an embittered cast-off reduced to script girl status. She’s followed by the movie’s cinematographer… and on and on. 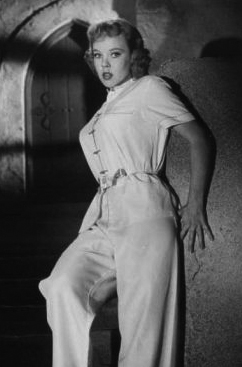 It’s a small company so the conga line of corpses begins to attract the attention of not only the local gendarmes but even the slow on the draw ingenue (baby-faced bombshell Jana Lund) who unleashes the mother of all screams when the monster comes calling for her own body parts.

Sporting a Dick Tracy proboscis and a ragged crew cut that gives him the appearance of a deranged Samuel Beckett, Karloff spends the film raging at the moon and stewing in his nuclear-powered operating room – an uncharacteristically unsubtle performance from the superb actor. In this case he was giving as good as he got.

A man with a well-known horror of improvisation, Karloff was a reliable soldier who wouldn’t be tempted to veer from a script no matter how bad – and Richard H. Landau‘s script is as colorless and unimaginative as Koch’s direction (maybe the writer’s biorhythms were off – he was responsible for the terse dialogue in Harold Daniels’ nifty noir Roadblock with Charles McGraw). 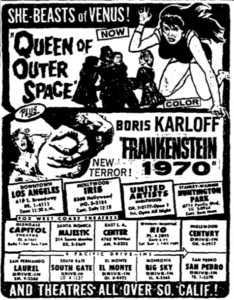 Shot in moody black and white by Carl E. Guthrie the film was double-billed with another CinemaScope production, the science-fiction pin-up extravaganza, Queen of Outer Space starring Zsa Zsa Gabor. Though Guthrie‘s work was better than average for a film with a eight day shooting schedule, it landed on the bottom half of the program, unable to contend with the campy eye candy of Edward Bernd’s Crayola-colored beauty pageant.

Guthrie sustained a remarkable career (from Bedtime for Bonzo to The Green Hornet TV show) but it was his lensing of Frederick Loren’s spooky sleepover in House on Haunted Hill that added to the number of sleepless nights for impressionable matinee goers. Warner Archive’s Blu ray for Frankenstein 1970 looks beautiful though the deep, velvety blacks of other high res transfers have gone missing. Still, the attention to detail is a delight. 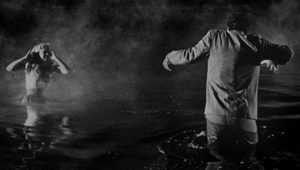 Addendum for Obsessive Night Owls: For some who first saw Frankenstein 1970 and Edgar G. Ulmer’s Daughter of Dr. Jekyll broadcast in the late 50’s as part of the Shock Theater package there may be lingering questions (typically the home for Universal horrors, Allied Artists provided Shock with a number of late 50’s releases including From Hell It Came and The Cyclops).

There is one suspenseful moment in all of Frankenstein 1970 – the opening sequence in which a village girl is stalked by a faceless but decidedly nasty creature. This same sequence shows up in the television edit of Daughter which borrowed shots of the prowling monster in order to expand its brief 71 minutes to fit a more conventional TV slot – even more preposterous, the climatic chase sequence in Ulmer’s film was printed twice to further the running time.