It’s the John Ford film you never heard of, not because it’s bad, but because it’s a little confused. Richard Greene, David Niven and an emotional George Sanders (!) dedicate their lives to clearing their father’s name of a smear by international arms smugglers! Their spirited companion Loretta Young behaves almost as if this were a screwball comedy. So does the director! Ford aficionados will be fascinated. 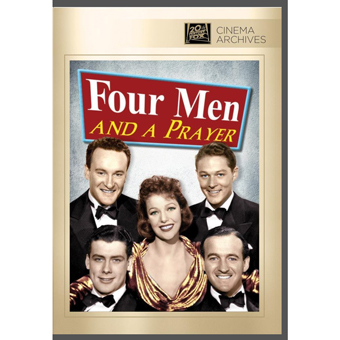 We all know that John Ford and Darryl Zanuck had a mutually beneficial relationship at 20th Fox — Zanuck allowed Ford to shoot the way he wanted to, and Ford put up with Zanuck’s final cut. True, Zanuck trimmed The Grapes of Wrath so tightly that characters just disappear, like Rose of Sharon’s young husband when the Joad truck reaches the Colorado River. But Zanuck backed Ford most of the time. In their choice of stories they shared an enthusiasm for the political underdog.

Ford may have earned this trust by making several less personal pictures for Fox. Given his reputation for being a bully on the set, I can’t quite picture Ford directing Shirley Temple in Wee Willie Winkie, which takes the prize as the family picture with the all-time dirtiest-sounding title. But the Ford-signed Fox feature least mentioned or revived is 1938’s Four Men and a Prayer. The biographers say that the director had little interest in the show. There’s still quite a bit of Ford’s sensibility present, even without a theme or content close to his heart. 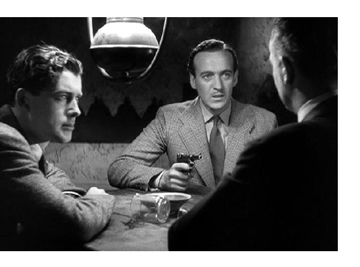 An updated spin on The Four Feathers has been made into a rather featherweight adventure chase across three continents. The British Army has taken heavy losses (“60 natives, 30 English”) putting down a mutiny in India, and Colonel Loring Leigh is court-martialed for incompetence. Dismissed, the old man sails for home, and his four sons drop what they’re doing to meet him. Geoffrey Leigh (Richard Greene) works at the British Embassy in Washington. Christopher (David Niven) is a flier with a string of girlfriends, Wyatt (George Sanders) is an attorney, and young Rodney (William Henry) is a student at Oxford. Sticking close to this pack is Geoffrey’s maybe-fianceé, socialite Lynn Cherrington (Loretta Young). The Colonel is no sooner home enlisting the boys to help clear his name, when he’s found dead from a bullet to the head. The courts call it suicide but the boys refuse to accept the verdict. They and Lynn are soon scattered across the globe, trying to collect evidence that a crooked arms syndicate wanted the Colonel out of the way.

An odd genre mix — the English brothers are not that different than The Hardy Boys, in dress attire — Four Men and a Prayer takes the ‘boys’ from Britain to the USA, to India, Egypt, Buenos Aires and the non-existent but real-sounding island nation of Marlanda. With all the changes of scenery, the show looks assembled from whatever standing sets were idle on the enormous Fox lot. In almost every reel some combination of brothers simply shows up in a new exotic locale, always dressed in fancy eveningwear. Lynn tags along, with a wardrobe suitable for a dress ball. The show is a bit fuzzy in the timeline department — although we see several ocean voyages, crisscrossing the Atlantic and Mediterranean, everything seems to occur in just a couple of weeks. The Leighs and Lynn are sufficiently wealthy to drop their working lives and become well-dressed amateur secret agents. The whole point of their voyages is to recover the family honor and vindicate dad, but most of the time they behave as if on a lighthearted madcap.

The Ford specialists point out Fordian ‘touches,’ most of which are pretty unsubtle. He was surely asked to lighten things up, which gives us a beer brawl in India, with a very young Barry Fitzgerald laying down a template for future Victor McLaglen-John Wayne donnybrooks. The family comedy gives us a brotherly history of teasing and pranks – young Rodney is stuck with the derogatory nickname ‘Snicklefritz.’ Even father pokes him with that one,  as if Ford liked the casual cruelty masquerading as bon-homie.

The movie isn’t progressive when it comes to Eastern minorities. The only real Indians the heroes interact with are comical servants and sinister ‘wog’ types — alien villains of an alien religion. Observing that a toadying, bowing servant has a squeaky voice, David Niven’s bon vivant makes a running gag of communicating with him by talking from his cheek like Donald Duck. It’s funny the first time and only Niven’s innate charm makes it minimally acceptable when repeated. We’re told that David Niven was Ford’s target for harassment on this picture, but I’ll bet it didn’t work — I can’t imagine Niven being intimidated or losing his sense of humor. 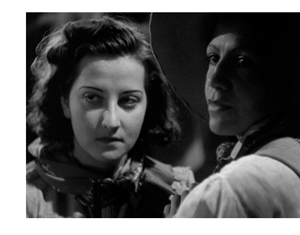 Neither Niven nor George Sanders were quite star names yet, and it’s fun to see them being so charming at a relatively young age. This show is the Hollywood debut of Richard Greene, remembered by many now-senior citizens as the star of TV’s Robin Hood in the 1950s. Gorgeous Loretta Young is the marquee star, and no matter where the group goes, she’s there in a party dress, hobnobbing with a tuxedoed munitions salesman on the deck of a pleasure ship, or strolling through the dangerous back streets of revolution-torn Marlanda.

Englishmen or white despots are shown to be in charge on three separate continents. Law and order and decency means suppressing resistance by the local non-white rabble. Surprisingly, more respect is afforded the peasant rebels In Marlanda. Practically breaking format to embrace the revolution, Ford awards them a series of beautiful, ennobling close-ups that remind us of his later work with Gabriel Figueroa. A likeable rebel General (J. Edward Bromberg, a good performance) is put up against a wall and shot. A large group of revolutionaries are massacred on a staircase, after discovering that the ammunition and guns they’ve just bought don’t work. The actual massacre with machine guns is staged almost like scenes from Sergio Leone’s later Duck You Sucker. Even in this politically neutral adventure, Ford and Zanuck hold the underdogs in special regard.

But despite Ford’s assured direction, this is where Four Men and a Prayer loses its grip. The Marlanda episode may illustrate the violence that arms traders make possible, but it has no lasting effect on our heroes. Decked out in a dress suitable for Cinderella, Lynn Cherrington observes the mass killing through a filthy window and is shocked. Just a few moments later she has reverted to ‘amused adventurous’ mode, pulling off bits of screwball comedy business with Green and the others. Ford doesn’t show Lynn stepping over any bodies on her way back to the boat, but he comes close. 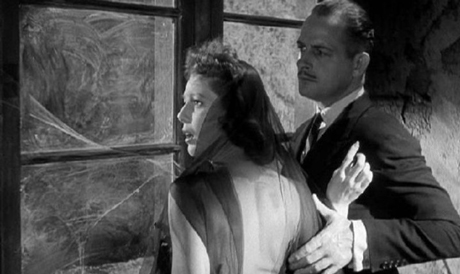 The big finale comes not with the arrest of the bad guys, but a showdown with the big honcho arms dealer. He’s played by none other than Berton Churchill, who in the 1930s was often the actor chosen to symbolize the evil banker, the embezzler crook responsible for the depression. We’re expecting a limp apology, but instead Churchill’s character defends himself, saying he wasn’t aware that the arms he’s selling are being put to bad ends — i.e., helping Indian rebels and Marlandian revolutionaries. Our heroes aren’t really concerned with any of that stuff, just their own family honor. Four Men and a Prayer toys with serious, grim issues — between-the-wars munitions sales reportedly fueled war hysteria. It doesn’t quite make the grade as a serious adventure comedy, like, say, Gunga Din. Three continents, showdowns, mass slaughter — and our heroes never break a sweat. The movie reminds me of the unpleasant Romancing the Stone — for the ‘exceptional’ Anglo characters, all the 3rd world suffering is just another exotic distraction.

To give the conflict-challenged story a boost, Lynn’s loyalty is placed in doubt; when she disappears suddenly the boys fear that she may have gone over to the other side. We in the audience suspect that she’s been kidnapped, but nothing so exciting takes place — the way things happen in this movie, Ms. Young may have had the words, ‘don’t muss my hair’ written into her contract.

David Niven’s breezy performance is a match for Young’s. His line delivery is so relaxed and natural that we might think he’s making it up as he goes. Not yet settled into his customary cynicism, George Sanders is excitable and sentimental. It’s a surprise to see him snuffling and holding back tears upon receipt of good news. Handsome Richard Greene is a bit stiff, and mostly hangs on Loretta Young’s arm. William Henry had a long career and played small parts in several more Ford films, but he’s totally unmemorable. Reginald Denny and Alan Hale Sr. are effective as dastardly arms merchants, and Ford fixture John Carradine looks a little silly in the uniform as a South American General with four names. When Carradine smiles, his long chin makes his face look like a crescent moon. 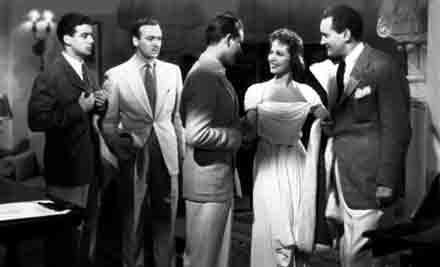 Four Men and a Prayer is one of the good new transfers from the 20th Century Fox Cinema Archives. The DVD-R disc is in fine shape, with a sharp, well-defined image that allows us to see the details in the clever special effects. The audio is strong from the Fox logo forward. It’s highly recommended for fans of John Ford.

Buenos Aires is represented by one nightclub interior; South American nightclubs in movies are just like clubs in New York, except that a shining night ocean is always visible through one missing wall. A pair of tango dancers are visible, but we don’t get close enough to see who they are. The handsome instrumental, not listed in the IMDB, is called “A Media Luz”. Here’s the classic Carlos Gardel version.