Westerns are all about values: good and bad, law and lawlessness, etc. Joel McCrea and Frances Dee’s ‘bad man’ saga isn’t faith based, exactly, but it’s great for humanitarian values, the simple notion that the good in people should be encouraged. And one important detail may make it unique. Hint: John Milius might be strongly prejudiced against this picture. 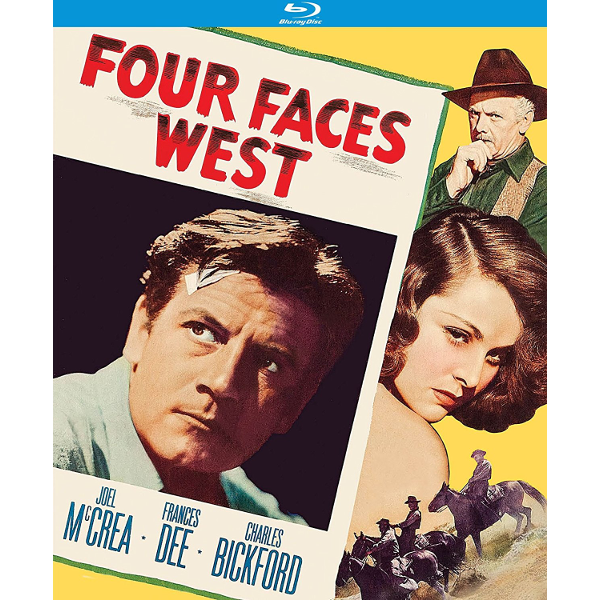 Faith-based westerns exist but much more numerous are lightly inspirational sagebrush pictures that deal not in miracles but in positive human values. Most are not quite as pure as advertised. The much-lauded Jacques Tourneur movie Stars in My Crown has its heart in the right place, with sweet and honest characters. I find it a little evasive on the subject of racism, but overall it comes off as good public relations for Christian values, at least on the theoretical plane.

The star of Stars in My Crown is the leading man Joel McCrea, who after the war turned almost exclusively to westerns. Two years earlier came the gentle, lightly inspirational Four Faces West, a modest picture of major quality. It was produced through the short-lived Enterprise Studios, which made some near classics but was defeated by an expensive flop, and perhaps also by political grief associated with its biggest star, John Garfield. With a deftly handled release Four Faces West could have been something big, as America was undergoing a rebirth of fundamental revivalism; even though its message is discreet it lends itself to a Faith-based sell. The forgettable title doesn’t express much. The original poetic title is not commercial because it’s in Spanish: Pasó por aquí. Translating as ‘He Passed by Here,’  that doesn’t promise big western thrills either. But it does express the film’s theme of doing good for one’s fellow men: the implication is that it’s a reference to the good deeds of one noted wanderer, Jesus Christ.

The odd ending to the title question is the fact that the Spanish language title doesn’t use the ideal (in Spanish) Pasó por aquí but instead reads Cuatro Caras del Oeste, a direct translation of ‘Four Faces West.’ ¡Ai Caramba!

Four Faces West immediately sets up an interesting premise — its thoughtful hero is also a gun-toting thief. Clean-cut Ross McEwen (Joel McCrea) robs a bank right under the nose of proud sheriff Pat Garrett (Charles Bickford), igniting a serious manhunt in Southern New Mexico. McEwen manages not to hurt anyone but suffers a snakebite during the course of his escape. He takes a train and meets two fellow travelers that eventually become fast friends, nurse Fay Hollister (Frances Dee) and Mexican businessman Monte Marquez (Joseph Calleia). When track repair problems stop the train, Pat Garrett and his deputies trace McEwen to a stagecoach. Not long after he reaches Alamogordo, both of McEwen’s new friends have deduced his secret and are trying to help him find a way out of his trouble.

You can’t find a better ‘civilized’ Western than Four Faces West. It sounds fairly corny, and perhaps it is, but an unusually thoughtful tone and excellent performances sell us on the story right away. It starts with a bank robbery and continues with the twist that the thief is a good man that we very much want to escape; he takes pains not to hurt anyone. Did you ever have your faith in people boosted by contact with a stranger that came to your aid? McEwen is impressed by the way Monte Marquez covers for him, just on intuition. He’s also moved by Fay’s integrity. An Easterner, she isn’t yet convinced that she likes the ’empty’ desert as a place to live. But she’s set on finding her place with good people, like the doctor who greets her in town.

Author ‘Eugene Manlove Rhodes’ isn’t a W.C. Fields pen name, but a well-known Western writer. Rhodes’ stories often embellished true tales of Southern New Mexico, and several were adapted as silent pictures. The show is so basic in approach that we might suspect it was a remake of a silent picture. It’s a character mystery: we’re curious to discover McCrea reasons for calmly stealing $2,000 when he knows that the toughest lawman in the West will be on his trail. Numerous potentially menacing characters appear, only to become convinced of McCrea’s good character: a bartender, a rancher who hires him in Alamogordo. The major fear is that a posse will gun him down before he can convince them he’s no ordinary outlaw. Charles Bickford’s Pat Garrett is conceived as an ideal lawman, one that doesn’t rush to judgment. If he seems darker than he’s meant to be it’s probably because we’ve been influenced by Sam Peckinpah’s interpretation of Garrett as a bitter Judas who shoots his best friend in cold blood.

The story’s essentially a Run For The Border (a better title) that turns into something else. None of the events play as ordinary thanks to the thoughtful script and pleasant actors. So many Westerns are based on treachery and lies that it’s refreshing to run into credible characters with good intentions. Everybody has a job and needs to make a living. When nurse Frances Dee runs off to be with her new friend the outlaw, we worry that her life will be ruined as well.

Fans of classic-era movie stars will delight in the co-billing of McCrea and Frances Dee, one of the longest-married couples in Hollywood. They played together back in the early ’30s, which is perhaps how they met. Their on-screen chemistry is good and they look like a couple that would remain clear of show-biz scandal. I can see this show being a fun romantic picture for them to run in retirement — it even has a scene in which McEwen gives Hollister a ring suitable as an engagement ring. Ms. Dee is probably best known for playing Meg in the old RKO Little Women (1933) and from her Jane Eyre-like starring turn in the genre favorite I Walked With a Zombie. As in that picture, Dee is given a character with depth. Fay Hollister almost loses her head over McEwen but it’s eventually he that changes his plans. Although McCrea’s McEwen is given the opportunity to redeem himself he has no overt religious motivation or Pollyanna attitude — he’s simply governed by moral principles. The overall civility is evident in the presentation of Mexicans in uniformly positive roles instead of using them as comedy relief or as pitiful victims. The benign attitude here is genuinely refreshing. Joseph Calleia’s Monte Marquez sees through McCrea’s disguise early on; normal genre convention dictates that as a Mexican he must have sinister motives. Marquez instead coaches and aids both McEwen and Hollister from the sidelines (as Calleia also did Glenn Ford and Rita Hayworth in Gilda). No preaching is involved although Marquez does point out a stone with an inscription in Spanish giving thanks for some act of aid in the past. Without being heavy-handed about it the storyline tilts in the direction of a parable: McEwan also stops in his flight to help strangers in need. As in a silent western the parable idea returns in another telling ‘cowboy’ detail: McCrea turns his bullets into medicine by reclaiming the sulphur from the gunpowder to make an inhalant. That may not be good medicine but the swords-into-plowshares concept makes a moral point without thumping a Bible. Four Faces West has dignity and it allows us to feel good about people. And that’s always valuable.

Alfred Green’s direction is gentle and unassertive. Russell Harlan’s camera makes the most of some impressive scenery including California’s Red Rock Canyon and various locations in New Mexico. The inscription rock is said to be in New Mexico’s El Morro National Monument. Producer Harry Sherman made a couple dozen Westerns, mostly in the ’40s. His daughter Teddi’s writing credit is genuine; she’s a screenwriter on a lot of movies and television episodes, including Robert Aldrich’s Ten Seconds to Hell. I have the feeling that life-long rancher McCrea came up with one unusual scene. He throws the posse off his trail by releasing his horse and instead riding a bull that he’s roped and saddled. I can imagine lots of kids watching this scene and asking, “Can he really do that?”

And now for the element of Four Faces West that may be unique. It wasn’t after I finished watching it for the first time that I realized that in the entire show, not one gunshot is fired. I’m not sure I’m aware of a single other western that can make that claim. The gunplay is not missed. The KL Studio Classics Blu-ray of Four Faces West is a fine encoding of this special movie, bettering by far a mediocre Artisan DVD from 2003. The image is clean and stable. The deserts look great in the well-shot exteriors. At one point McKuen starts a wildfire to cover his escape. It seems unclear how the production could get it under control, as it’s pretty big.

According to Variety Four Faces West didn’t make back its negative cost ($1.2 million) in release from United Artists. Enterprise was one of the biggest postwar efforts to establish an independent studio; it may have been defeated by less-than-aggressive marketing by its second distributor MGM, which naturally favored its own product. All of the Enterprise Studios pictures were picked up by Republic but are now held by Viacom’s Melange Pictures and distributed by Paramount.

If the cover art is the best available from the original release, it’s no wonder that this picture only became a favorite on television. The only extra is a tall stack of trailers of recent Kino westerns.

To the filmmakers’ credit, the story isn’t at Christmastime . . . although I’ve always found the storybook ending of John Ford’s Three Godfathers to be charming.