The great Fred Zinnemann’s last feature is a very personal story, a fairly uncomplicated drama with a mountain climbing backdrop. Sean Connery plays older than his age as a Scotsman on an Alpine vacation, toying with social disaster. With excellent, non- grandstanding performances from Betsy Brantley and Lambert Wilson. 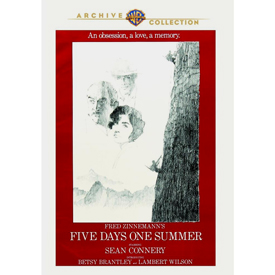 Fred Zinnemann is a filmmaker that I’ve come to admire, as much for his personal integrity as for the movies he made. He could be inconsistent and his weaker films are some of his most popular, but when he’s good he’s terrific, whether in ’30s leftist mode (Redes), anti-Nazi mode (The Seventh Cross), pushing postwar humanism (The Search) or postwar nihilism (Act of Violence). He made a thoroughly honest picture about religion (The Nun’s Story) and a fantastic assassination thriller (The Day of the Jackal). Yes, there have been some duds, but I believe that he’s dismissed mostly for not catering to critical tastes. 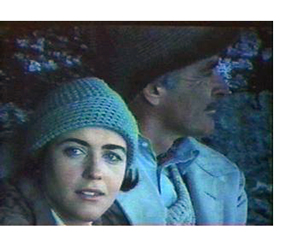 Zinnemann’s final film returns him to Europe and a youthful love, mountain climbing; it’s one of the least fictionalized and therefore one of the best pictures about what holiday climbers experienced in the early 1930s, between the wars and before the rise of Hitler. It’s from a story by author and poet Kay Boyle, an American who lived in Europe in the 1920s and thirties. The blacklist witch hunt hit a lot more than Hollywood; Boyle’s husband lost his job in the State Department and she was dismissed from a prominent post at The New Yorker. They were cleared only years later, long after the damage was done.

Five Days One Summer is about equally sticky personal ethics. It does seem like a short story spun to feature length, with atmosphere and the climbing scenes substituting for plot complications. It plays like a picture that Zinnemann really wanted to make, and we can tell that star Sean Connery believes in it as well. The theatrics are subdued but potent, and Connery is willing to play his age. He doesn’t even wear his toupee. Actually, his character is supposed to be sixty, and Connery was 51 at the time of filming. 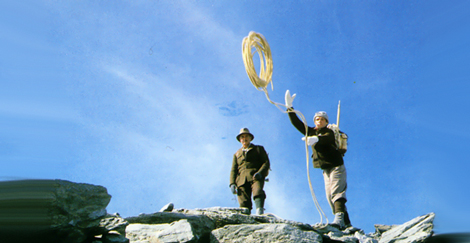 Douglas Meredith (Connery), a doctor, belongs to a shipbuilding family but spends his time in study and travel. He’s in Switzerland for a summer of mountain climbing with his wife Kate (Betsy Brantley), who is so young compared to him that the locals are surprised, even disapproving. Their experienced guide Johann (Lambert Wilson) is much closer to Kate’s age, and the thinnest of triangles forms, mainly with the two younger people just being aware of each other. But flashbacks soon reveal what’s really going on. Kate is not Douglas’s wife, but his niece; she’s been obsessed with him since childhood and they just started an affair hidden from his wife Sarah (Jennifer Hilary) and her mother (Isabel Dean). When Kate tells this to Johann, nothing alarming happens — except that Douglas insists on doing a demanding climb, one recommended for a younger man.

Five Days One Summer has been compared to the German mountain climbing pictures of the Leni Riefenstahl variety. I see no connection, as those tend to be transcendent spiritualist fantasies about nature’s way, ‘heimat’ values or quasi-racial purity. Zinnemann disposes with theatrics and keeps things low-key, which does mean that there are no big theatrical fireworks scenes. We simply observe some people playing risky interpersonal games. Zinnemann chose a good actress instead of a name star to play Kate, but Betsy Brantley has enjoyed an impressive career. Interestingly, she is said to have been the animation model for Jessica Rabbit in Who Killed Roger Rabbit? Likewise Lambert Wilson was not yet fully established as a film actor. His guide is little more than a sketch until he declares himself. He then declares his disapproval of Kate’s affair with her own uncle, which I assume is 100% incest, legally speaking. 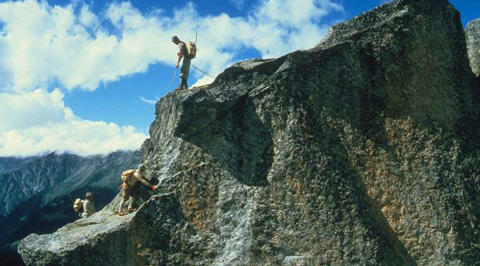 The climbing scenes will be absorbing to people who care about realism, and perhaps less exciting to those expecting constant thrills and jeopardy. It does look scary at times, especially if one has an imagination and can picture climbing into a place where one just can’t get down. One can get killed on a climb like this in any number of ways, some stupid, others simply unavoidable. When trouble does happen, it’s not even a matter of a particularly treacherous situation. Fans of climbing films will be impressed to see that it’s all natural — no sets and no process work. I’m sure doubles are being used here and there, but it’s really Connery in most of what we see. An extra level of achievement is that they’re often filming on what must be pristine snow — there’s no ‘take two’ when take one would pockmark the snow with big footprints, and CGI doesn’t exist to blot out mistakes. So people are really tromping through snow-covered rocks and ice that might not support their weight.

So Five Days One Summer is perhaps more of a rumination on risk. If Kate and Douglas are foolish enough to think they will get away with their forbidden vacation, what other bad judgment is afoot? Does Douglas ‘have it together,’ or is he a fool courting disaster? I suppose Kate is meant to be in her early twenties, and Douglas says outright that he’s sixty, so it is quite an age gap, one that in their society of 1932 would serve as a powerful gossip magnet. Kate worries that her mother doesn’t believe their cover story, and has already guessed; the flashbacks don’t say one way or the other, although some of those scenes suggest that they might be women in denial, harboring unspoken suspicions. 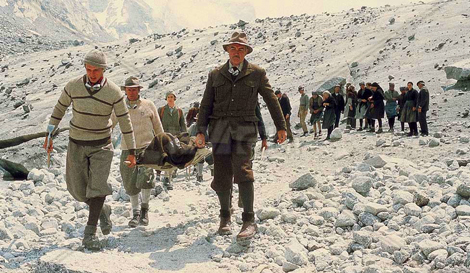 Zinnemann lays out a beautiful counterpoint to the age gap that plays like one of those science fiction yarns where lovers separated by a star voyage discover that one has aged decades while the other is only a year or two older. The climbers find a dead body in the ice. It is suspected that it is that of a local man lost who was lost, tellingly, forty years ago. He disappeared the day before he was supposed to be married, and his bride from long ago is now a wrinkled old maid. The frozen body has been perfectly preserved, and when it is recovered she comes to take a look…

Does the director undercut his own story? That encounter and the other elements of conflict and danger are all understated, in a genre where BIG mountains are supposed to inspire BIG emotions and BIG drama. Five Days One Summer can be fairly labeled an ‘old man’s movie,’ in that Fred Zinnemann is clearly trying to make a meaningful personal statement, not swing for the fences in search of a commercial hit. 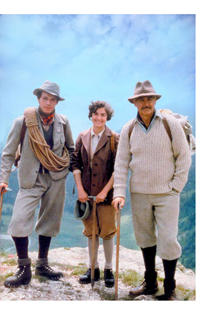 The Warner Archive Collection DVD-R of Five Days One Summer is a good if not spectacular transfer of this handsome show, lensed by cinematographer Giuseppe Rotunno. The image is subdued and the colors don’t go for the old Technicolor look we associate with Alpine glamour. It’s possible that filters were used for a specific effect that the additional resolution of HD might have brought out. But the enhanced widescreen image is sufficient to impress us with the virtuoso camerawork in difficult conditions. Zinnemann and company must really have planned those shooting days on the mountain down to every detail.

Of special note is Elmer Bernstein’s music score — he seems to have completely escaped from his standard Hollywood work, with period-appropriate themes that express the film’s emotions without simply parroting those of the characters.

A trailer is included that fails to make the film seem like an essential item. That’s too bad, as Five Days One Summer certainly shows Sean Connery in an unexpected role.

I wonder if Alfred Hitchcock and Joan Harrison were thinking of Kay Boyle’s story when they made their 1959 Alfred Hitchcock Presents episode The Crystal Trench, from A.E.W. Mason and adapted for the screen by Stirling Silliphant. It’s about a bride who lost her husband years ago on a Swiss mountain. When the glacier cracks open she returns to retrieve it and prove her undying love. The show plays a particularly wicked twist on the idea of faithful love.