Dalton Trumbo and Nathanael West contributed to the screenplay for John Farrow’s suspense adventure about a plane crash in the Amazon jungle — who will survive? Lucille Ball is the ranking castaway in a glossy RKO thriller that’s been restored to a fine polish. 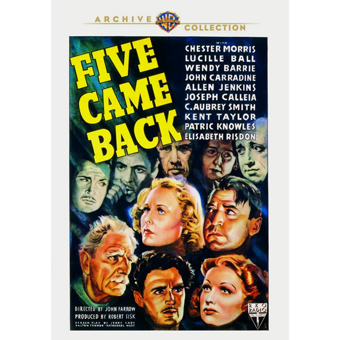 When they list the ‘big’ pictures of 1939, the ones that we’re told made that year Hollywood’s best ever, there are some winning titles that don’t get mentioned. One such gem is RKO’s Five Came Back, a modest adventure thriller that became a surprise hit. Structured as a suspense machine by some famous-name writing talent, the show also gave contract player Lucille Ball a major career boost. Its director thought enough of it to remake it seventeen years later. 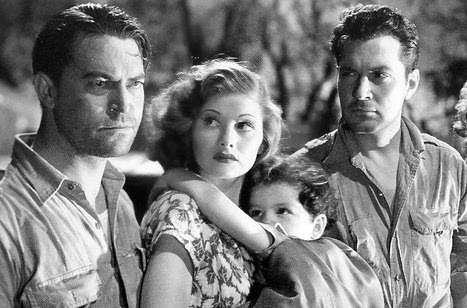 I saw Five Came Back not too long ago on TCM cable, looking in pretty poor shape. George Feltenstein let it be known that a restoration was in the works and it finally came through last summer. With this new disc not only is this picture improved, it looks terrific. Now it makes sense that its cameraman is none other than the stylish Nicholas Musuraca.

The story gets its hooks into us right away. Twelve people depart from a Mexican airfield, destination Panama City, and the title tells us that fewer than half will survive. There are the runaway celebrities Judson Ellis and Alice Melbourne (Patric Knowles & Wendy Barrie), old professor Henry Spengler and his wife Martha (C. Aubrey Smith & Elisabeth Risdon), detective Mr. Crimp (John Carradine) and his prisoner Vasquez (Joseph Calleia), a ruthless anarchist being extradited for execution; gangster ‘Pete’ (Allen Jenkins) and his charge Tommy Mulvaney (Casey Johnson), the son of a top mobster; pilot Bill and co-pilot Joe Brooks (Chester Morris & Kent Taylor), the beautiful Peggy Nolan (Lucille Ball), and a Steward, Larry (Dick Hogan). The tabloid press grabs pictures of Ellis and Melborne at the Mexican airport, where the ruthless Vasquez almost makes an escape.  We learn little about Peggy’s past except what her attitude tells us; she gives away some urgent flowers that arrive just before take-off time. 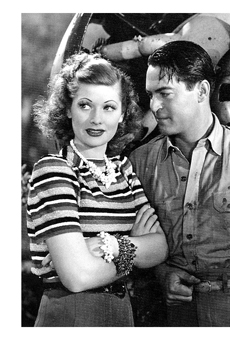 A storm is the undoing of everything. Bill loses one engine. Some compressed air cylinders shake loose in the passenger compartment. They’re forced to ditch way off their flight path, in the headwaters of the Amazon. Bill and Joe think they can repair the plane and take off again, and there’s enough food about to keep them going for weeks. But Bill calculates that the plane won’t be able to carry a full load of passengers… and professor Spengler knows that deadly natives live in this part of the jungle. Will any of them live long enough to fly home?

With director John Farrow keeping everyone on task, Five Came Back shapes up as an efficient and suspenseful thriller. Two of the listed screenwriters are the famed Dalton Trumbo and Nathaneal West. The finished show displays more of Trumbo’s optimism for a social utopia, than any sign of West’s dark personality. Just the next year, West would lose his life in a tragic car crash.

Adversity brings out the best in most people, the message would seem to be. Five Came Back is a ‘socially theraputic’ ensemble film, like Dudley Nichols’ Stagecoach. Most of the castaways accept Bill’s authority as their leader. Martha Spengler becomes the cook, and she and her husband Henry find romance again. Rich snob Judson gets drunk, turns hostile and alienates his sweetheart Alice; she’s drawn closer to Joe, the co-pilot. Mob gunsel Pete becomes a substitute father for little Tommy. Most everybody becomes a better person. Obvious creep Mr. Crimp is soon less sympathetic than his prisoner. The killer Vasquez is inspired by the courage and cooperation that grows in the new little community of survivors. 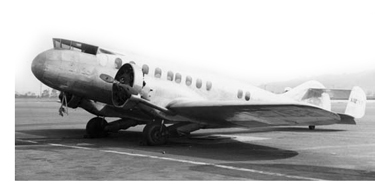 The film’s technical details are amusing. The storm somehow causes the plane to overshoot Panama and land in a distant jungle; it’s like flying from Los Angeles to Texas and landing in Florida by accident. We expect to see model airplanes in use, and Vernon Walker’s special effects are pictorially effective, if not really realistic. The flying scenes use a rather unfamiliar aircraft type, which doesn’t help. The plane looks pretty dinky outside, whereas inside it’s as spacious as a Pullman train car, with double-decker pull-down beds. One of Bill and Joe’s repairs is to straighten out a bent propeller, which would never work. The repairs seem pretty extensive for two guys with only basic tools. But, hey, this is Hollywood, folks. A suitable runway is made in a wild rainforest jungle just by moving some brush and a few rocks.

RKO’s interior jungle set is a winner. It looks enormous, lush and there isn’t a plastic rock in sight. Nicholas Musuraca’s lighting gives it a natural quality, too. This is the jungle but apparently not the hot and steaming kind packed with noxious mists and disagreeable bugs. Everybody looks like they’re on vacation but we still buy their predicament. 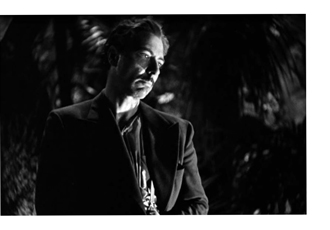 Most everybody gets a back story except for the gorgeous Lucille Ball. It is hinted that she has a hot past, but her honorable behavior soon wins over the dame-hating Bill. Playboy Joe waits patiently for Alice to defect from the worthless Judson. Pete leaves his mob cynicism behind, putting himself in danger to save Tommy and his new friends. The script expends the most effort on the conversion of Vasquez from political assassin to a beacon of morality. In this movie political anarchists are maladjusted misanthropes that need only the company of  ‘decent folk’ to abandon their radical ways. Vasquez is soon giving everyone lessons in altruistic self-sacrifice. It’s a little much, but the fine actor Joseph Calleia keeps it on the level. Director Farrow gives Vasquez almost too much screen time to explain why he is best qualified to choose who flies to safety and who stays behind.

Five Came Back has dated a lot less than one might expect. Howard Hughes and John Farrow remade it in 1956 as Back from Eternity. The airplane angle surely made it an easy sell to RKO chief Howard Hughes, who okayed a higher profile cast topped by the sexpot Anita Ekberg. Our favorite redhead Lucille Ball is plenty sexy for 1939, even with stories that real spiders living in RKO’s studio jungle sent her screaming off the set. After ten years on the starlet treadmill — and the ’30s were rough times for starlets — Ball was just beginning to carry some weight as a featured player. She and her husband Desi Arnaz would eventually own the whole studio! 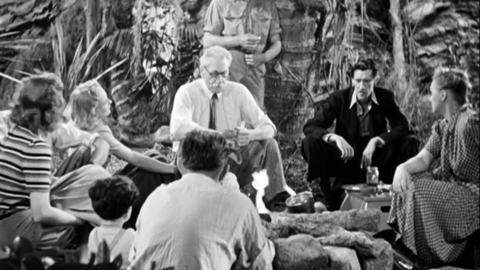 The Warner Archive Collection DVD-R of Five Came Back is a thorough revitalization of this very good survival thriller from the Golden Age of Hollywood. It looks great even in the dissolves and opticals, and Roy Webb’s music is bright and clear. Joseph Calleia must have been in good with the front office for he’s also given major screen time in the trailer that’s included. The excellent actor is in everything from the Sabu Jungle Book and For Whom the Bell Tolls to Gilda and Touch of Evil.