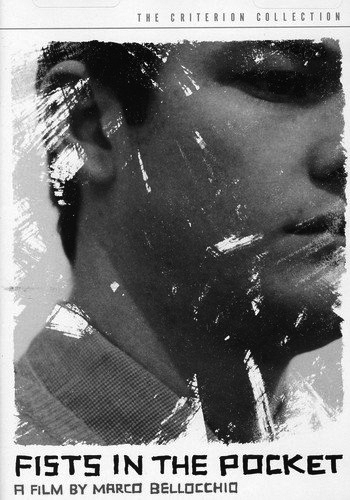 The split-personality of world cinema was never more evident than in 1965 when Fists in the Pockets and Repulsion debuted alongside The Sound of Music and That Darn Cat. All four films dealt with fantasies of family life but only one suggested smashing the institution altogether. And that film was That Darn Cat (“sarcasm font”).

Hailed as one of the most audacious debuts in film history, director Marco Bellochio’s Fists in the Pocket premiered that summer at the Locarno Film Festival. Both Time and Newsweek raved and even Life Magazine, America’s favorite coffee table prop, confessed they were “stunned but exhilarated.” The movie received a more predictable reception from the usual suspects – The Christian Democrat Party called for its expulsion from the public eye. 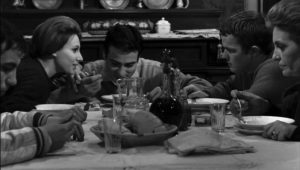 Bellochio’s film about a deranged brood, near apocalyptic in their awfulness, lays out its cold-hearted scenario with the surgical precision of Luis Buñuel but none of his winking humor. Oddly Buñuel, no stranger to controversy, was not among those throwing roses – perhaps because in some quarters Fists in the Pocket was championed as a black comedy and the Spaniard balked at the proximity to his own domain. Imagine, being condemned by Buñuel and the Catholic Church.

Having written a screenplay that might give pause to Krafft-Ebing, the then 26 year old filmmaker controls each frame with frightening assurance while luring his actors up to the edge and giving them a firm push. 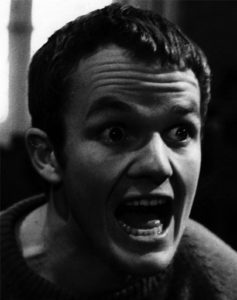 The movie begins in chaos, a flurry of haphazard camera moves and indecipherable characters. The sequence reflects the manic interior life of this profoundly flawed family and it’s up to the reeling viewer to suss out just who is who and what exactly is going on. Bellochio presents a world out of control and just when it seems too much, he puts on the brakes allowing us to appreciate the train wreck in real time.

The clan lives in a suitably stark house on the outskirts of Bobbio (Bellochio used his mother’s house – and money – for the production). While the real-life landscape might be more beautiful in CinemaScope and Technicolor, cinematographer Alberto Marrama’s black and white imagery has the raw power of an early crime scene photo. 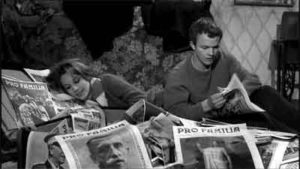 The remarkable Lou Castel plays Alessandro, a thuggish young man who murders his family to buy freedom for his brother Augusto, the unofficial head of the fatherless household and the only “normal” one of his siblings.

A natural born killer, Alessandro is more droogish than his quasi namesake, Alex of A Clockwork Orange, and he’s prone to mysterious physical tics – indecipherable gestures that make sense only to him. He’s known by a variety of names, including Sandro and Ale, that emphasize his cracked personality. And between plotting matricide and fratricide he plays at incest with his vacuously beautiful sister Giulia (Paola Pitagora) while barely tolerating his introverted brother Leone. 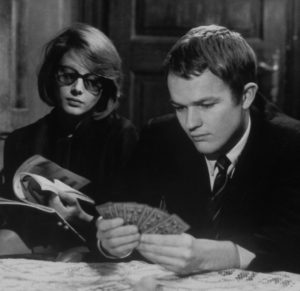 Fists in the Pocket is as cold as Kubrick’s Clockwork but it’s not inhuman – Bellochio invents a fittingly operatic finale for Sandro that finds him bellowing La Traviata (“Oh! Love! Madness! Euphoria!”) while simultaneously succumbing to a seizure. Meanwhile Giulia lingers in bed waiting for the noise to die along with her monstrous brother.

Marrama‘s austere cinematography is a hard look at a brave and terrible new world and Criterion has performed a meticulous restoration of the film with their new director-approved Blu ray. They’ve also put a number of extras on the disc, new and old, that will lead the sturdy audience to a better understanding of Bellochio’s fractured family picnic.

Shock to the System, a new interview with scholar Stefano Albertini.

And tucked in the keepcase, an essay by film critic Deborah Young.