Where was Leonard Pinth Garnell when we needed him?  Joseph Losey is often accused of pretension but in this case he may be guilty. Robert Shaw and Malcolm McDowell are escapees scrambling across a rocky terrain, pursued by a helicopter that seems satisfied to just harass them. Keeping the audience in the dark doesn’t reap any dramatic or thematic benefit that I can see. 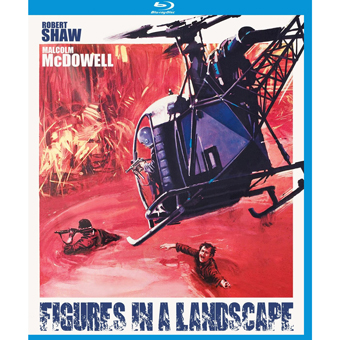 Joseph Losey is a gold mine for film criticism but a real problem for simple film reviewing. It’s not easy to find the right words of praise for a film that one admires yet doesn’t particularly enjoy watching. Losey sprang from theatrical experience with Bertolt Brecht and Charles Laughton, where important artistic and political ideas went hand in hand. His best American noirs provoke the mind without succumbing to hysteria, while his upscale English art movies made him the most critically praised director of the mid-sixties. I personally find all of Losey’s pictures interesting, so it doesn’t matter that their value as entertainment is all over the map — the weak titles often have elements of experimentation that compensate for production shortcomings, oddball casting, or occasionally, ham-fisted direction.

In 1970 came one of Losey’s best-regarded pictures, The Go-Between, a straight period drama with exceptionally good performances. The same year saw the release of the nearly forgotten Figures in a Landscape. Sort of Waiting for Godot combined with The Naked Prey, it likely frustrated the action-oriented audience attracted by its advertising. “The Bird Has Come For Its Prey” shouts the poster copy, over an image of two armed men trying to evade a menacing helicopter. We immediately want to know what they’re running from and how they’ll fight back. What can go wrong?

The title Figures in a Landscape isn’t a good fit for an action ordeal about men on the run. Barry England’s novel follows two prisoners of war in an unnamed Latin American country, who escape during transport and battle their way across a harsh landscape. The screenplay adaptation is by actor-playwright Robert Shaw, who must have been attracted to the raw action and intense characters. Joseph Losey pitches the whole thing at an existential level. The result is a real head-scratcher.

Escaped prisoners MacConnachie and Ansell (Robert Shaw & Malcolm McDowell) are on the run in an under-populated mountain region, their hands tied behind their backs. They may be opposition soldiers in a civil war, but no specifics are given. A helicopter finds and harasses them. They kill a goatherd, but find nothing to help in their flight. Managing to free their hands, they raid a village at night, frightening a stony-faced, possibly blind, woman (Pamela Brown). They continue a curious off-on battle with the helicopter when it returns. Their goal is to escape to the border, but the domineering MacConnachie seems intent on continuing the fight, especially when he acquires an enemy soldier’s machine gun.

As a blend of action movie and art film, Figures in a Landscape doesn’t really connect with an audience. Two desperate men alone in the wild is instant allegory material, the kind of minimalist setup we might expect from a low budget effort like Battle of Blood Island. But Joseph Losey’s fully funded production is filmed in Panavision and Technicolor in the mountains of Andalusia, Spain by top English talent. Robert Shaw was an established star, and Malcolm McDowell had just broken through with the delayed release of Lindsay Anderson’s If….. Figures gives each actor a major workout, climbing over cliffs and through a dangerous-looking brushfire. There’s nothing cheap about this movie.

But in Figures we really can’t see what Joseph Losey had in mind. The dialogue isn’t stylized or ‘Pinter-ized’ but it does seem designed to keep us in the dark. The men talk only of their immediate needs, with MacConnachie asserting his leadership position both by age and attitude. The only jokes are about women. The older man has a wife back home, and a daughter somewhere. The two actors mesh well enough but never really connect as characters. The show doesn’t shape up as a buddy picture about two disparate men forced to understand each other through a harsh ordeal.

Losey’s direction isn’t focused on credibility, not even action movie credibility. I don’t know how author Barry England handled these scenes, but Shaw and Losey stage an existential game of helicopter-tag, harassing the soldiers in an inexplicable cat-and-mouse game, like the giant balloons that follow Patrick McGoohan in the TV series The Prisoner. The pilots hug the ground, constantly risking rotor contact — nobody flies like that except movie stunt men. What we’ve got here are risky movie helicopter tricks — the real tension in the helicopter scenes comes from seeing how close McDowell and Shaw get to those whirring blades — a ‘Twilight Zone’ accident looks very possible.

Joseph Losey liked dramatizing extreme states. His best movies play with psychology and socio-political messages: The Prowler, The Lawless, The Criminal, The Servant, Accident. Figures is literal and abstract at the same time. It’s more than a little frustrating paying close attention to the busy surface details, waiting for a story to appear. If the journey were more interesting, we wouldn’t mind not arriving at a definite destination. But literal minded viewers may not be engaged enough to care how it turns out. 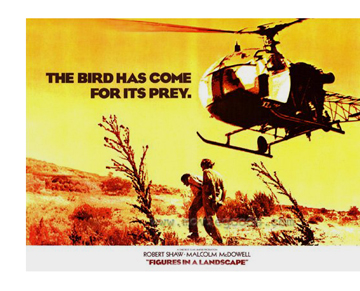 So just what is this very elaborate chase movie about?  With Losey’s background, critics often relate his films to The Blacklist. In this case there doesn’t seem to be any correlation. Is it just a broad allegory about the ‘struggle of life?’ If so, it’s really trite. There’s also the ‘Fine Art’ approach. This article by Evan Calder Williams analyzes Figures in terms used to evaluate great paintings. The film’s title does sound like it belongs on an oil painting in a museum, and Losey is the kind of director who might design an entire fiction film as an abstract pictorial exercise. But even when I make the connections suggested by Williams, I don’t feel I’ve gained any understanding of the movie.

It is possible to connect some of dots in this show with one of the director’s earlier pictures. Losey definitely revisits and reworks themes that attract him. His 1961 science fiction feature These Are The Damned is partly a thematic transposition of his own earlier The Boy with Green Hair. In the 1948 part-fantasy, a group of orphans on war relief posters come to life as ‘ghost children’ to deliver a pacifist message. Ten years later in The Damned, the ghost children have been re-invented as radioactive mutants, kept as guinea pigs for a secret government project. The two sets of weird orphans serve a similar function, to rouse the liberal consciousness.

The helicopter in Figures in a Landscape seems related to another visual thread in These Are The Damned. The earlier movie more or less introduced into filmed sci-fi the idea of helicopters as symbols of cold technological menace, of an impersonal future monitoring us by remote control. In the service of the faceless secret project, two large helicopters force a sports car to stop on a cliff-top road, hanging in the air. The composition places the two hovering machines at opposite ends of the frame, an almost surreal use of ‘figures in a landscape.’ The occupants of a small boat have been poisoned, and one of these same helicopters hovers above, waiting like angels of death. In both movies the helicopters serve a thematic function; in Figures that is seemingly all they do.

The twenty-five cent interpretation of Figures in a Landscape is therefore that the helicopters represent the ‘big obstacle’ opposing individuals caught in the cruelty of the human condition. One can struggle against it and lose, or prevail and escape, but men that insist on fighting it directly will not succeed. That’s about all that can be wrung out of the show. Losey mercifully does not clobber us with road signs, obvious symbols or giveaway dialogue, not even the poetic association with ‘graveyard birds’ that runs through The Damned. We can only assume that in Figures in a Landscape Losey was hoping that viewers would identify sufficiently with his fugitive pair, to find their own meaning for it all.

The KL Studio Classics Blu-ray of Figures in a Landscape is a beautiful widescreen encoding of this attractively-shot picture. Three well-known cameramen are listed for what was a long shoot; scheduling may have forced one or the other to drop out. Richard Rodney Bennett’s music score is billboarded nicely as well.

Kino does its best to pitch its disc text copy to give the impression of a more accessible adventure: “…nonstop suspense … a jolt of pure adrenaline.” What they don’t say is, ‘What the heck is going on here?’