That naughty boy Federico Fellini goes all out with this essay-hallucination about women, a surreal odyssey that hurls Marcello Mastroianni into a world in which women are no longer putting up with male nonsense. It’s an honest (if still somewhat sexist) effort by an artist acknowledging illusions and pleasures that he knows are infantile. 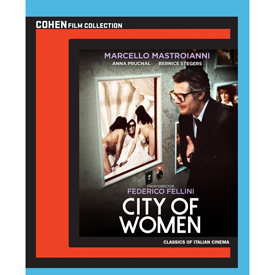 Federico Fellini’s 1980 City of Women was called ‘wonderfully uninhibited’ by The New York Times. Fellini’s output slowed to a crawl in the 1970s, seemingly from the same sort of ‘what to do next?’ ailment that he commemorated in his first openly autobiographical movie, Otto e mezzo. From then on his big movies succumbed to a kind of shapeless sprawl, an endless parade of images from the bizarre realm of the Fellini subconscious. Nostalgia gives form to Amarcord, while his period piece Casanova never really comes together. 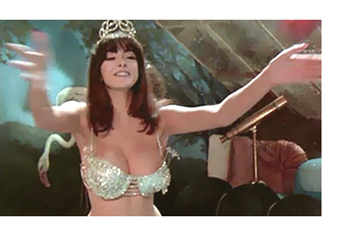 Riding on a train, Snáporaz (Mastroianni) is enticed by a gorgeous but mysterious woman (Bernice Stegers). The train stops and she runs away; believing that the chase is on, Snáporaz leaves the train as well and undergoes a fantastic odyssey. His first stop is a resort where a convocation of feminists are gathered to condemn men — Snáporaz wants to be sympathetic but he’s incapable of realizing that women have changed. Pursued by uniformed female storm troopers, he flees with an old woman who turns out to be as sexually threatening as other harpies in Snáporaz’s fantasies. Snáporaz eventually arrives at the besieged villa of Dr. Xavier Katzone (Ettore Manni), a sexist holdout in a world where the female sex is in power. He throws a giant party to celebrate his life of debauchery and male domination: he’s just chalked up his 10,000th conquest. Giudo runs into his ex-wife Elena (Anna Prucnal), who was apparently one of Katzone’s lovers as well. But the femi-Nazi shock troops arrive to cut the festivities short. 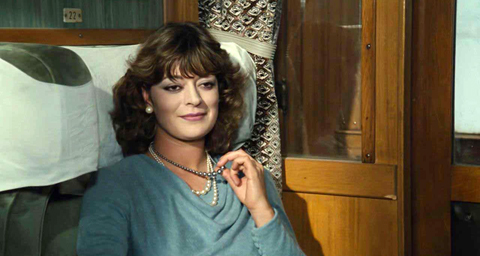 François Truffaut’s The Man Who Loved Women admires females from a different but equally sexist French perspective. Truffaut’s lovers are angels that serve a man’s ego, as if every conquest a man makes will be his amorous possession forever. The fantasies of Fellini / Snáporaz show a lifetime of crimes against women coming back to haunt him. Old wives and lovers laugh that he’s still the slave of his infantile desires and fantasies. Aggressive women threaten him,and one (Iole Silvani) tries to rape him. A young woman on roller skates named Donatella (Donatella Damiani) is gentle with Snáporaz. He helps him from time to time, but she also leads him into various traps. 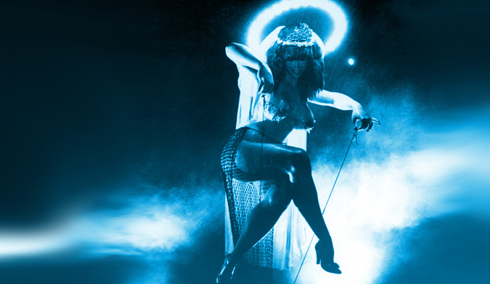 Technically and visually, City of Women is quite accomplished. Giuseppe Rotunno has complete control of Dante Ferretti’s highly imaginative sets, which include several fantasy love nests. Making a big impression is a hallway with dozens of interactive audio-visual ‘trophy’ recordings made by Dr. Katzone’s innumerable conquests. When played together, the voices create a cacophony of whispers and squeals of pleasure. 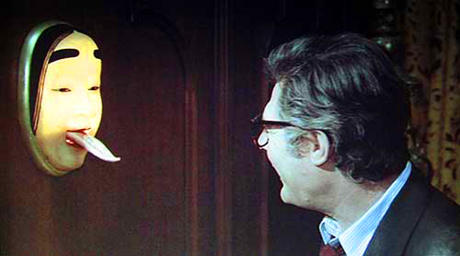 The erotic grotesquerie here matches anything I’ve seen. Dr. Katzone’s wife performs a ‘magic vagina’ trick that’s obscene but genuinely oneiric in conception: it involves money and telekinesis. A visualization of one sex obsession uses a grossly oversized sculpture of a woman’s posterior, anatomically correct. Snáporaz’s desires make him both a begging clown and a victim of his own female-fixated mindset, even as Rotunno’s images present us with scores of beautiful, if perplexing, women. Little time is spent on appreciating anything like sexual equality. One of the seductresses that conducts Snáporaz to the big bed up the stairs is an epitome of fleshy Italian excess who moves more explicitly than any burlesque performer. It’s all to tease and frustrate the confused hero.

I’m not sure what Fellini’s overall point is, except to say that things have changed. Men are now supposed to treat women as intellectual equals and not sex objects. But Fellini doesn’t seem convinced of that, as his fantasies mostly show women using their new power to punish the apparently unredeemable Snáporaz. Even with Dr. Katzone providing an example of chauvinism at its extreme, Fellini doesn’t give any hint that the child-man Snáporaz is capable of changing his sexist viewpoint. His crimes mostly boil down to a childish selfishness, and the leaders of the film’s female horde are set on a tough-love re-education project, a Maoist Cultural Sexual Revolution.

Viewers had better be entertained by Fellini’s colorful brand of grand fantasy, because the movie is dramatically inert; it’s a visually dazzling sideshow parade, not a drama. Mastroianni’s Snáporaz is affable but no longer much of an identification figure; his adventure is nowhere near as much fun as that Vittorio De Sica comedy back in the sixties where all he had to do is watch a Sophia Loren striptease. Still, City of Women does deliver on the promise of an imaginative, highly erotic nightmare. The all-women / all-sex subject matter must have appealed to the movie money men, for both Dino de Laurentiis and Carlo Ponti are in as co-producers.

The Cohen Media Group’s Blu-ray of City of Women is a dazzling HD encoding of this colorful art movie from the last decade of Fellini’s filmmaking output. In the U.S. it waited a year for release and then was treated as a soft-core sex film. The colors are dazzling, and the elaborate special effects both arresting and jolting. Luis Bacalov’s music adds a touch of lushness, and finds alternatives to Nino Rota’s standard circus music for Fellini’s fantasy films.

We’re also given three trailers, French and Italian originals and a 2015 re-release promo.