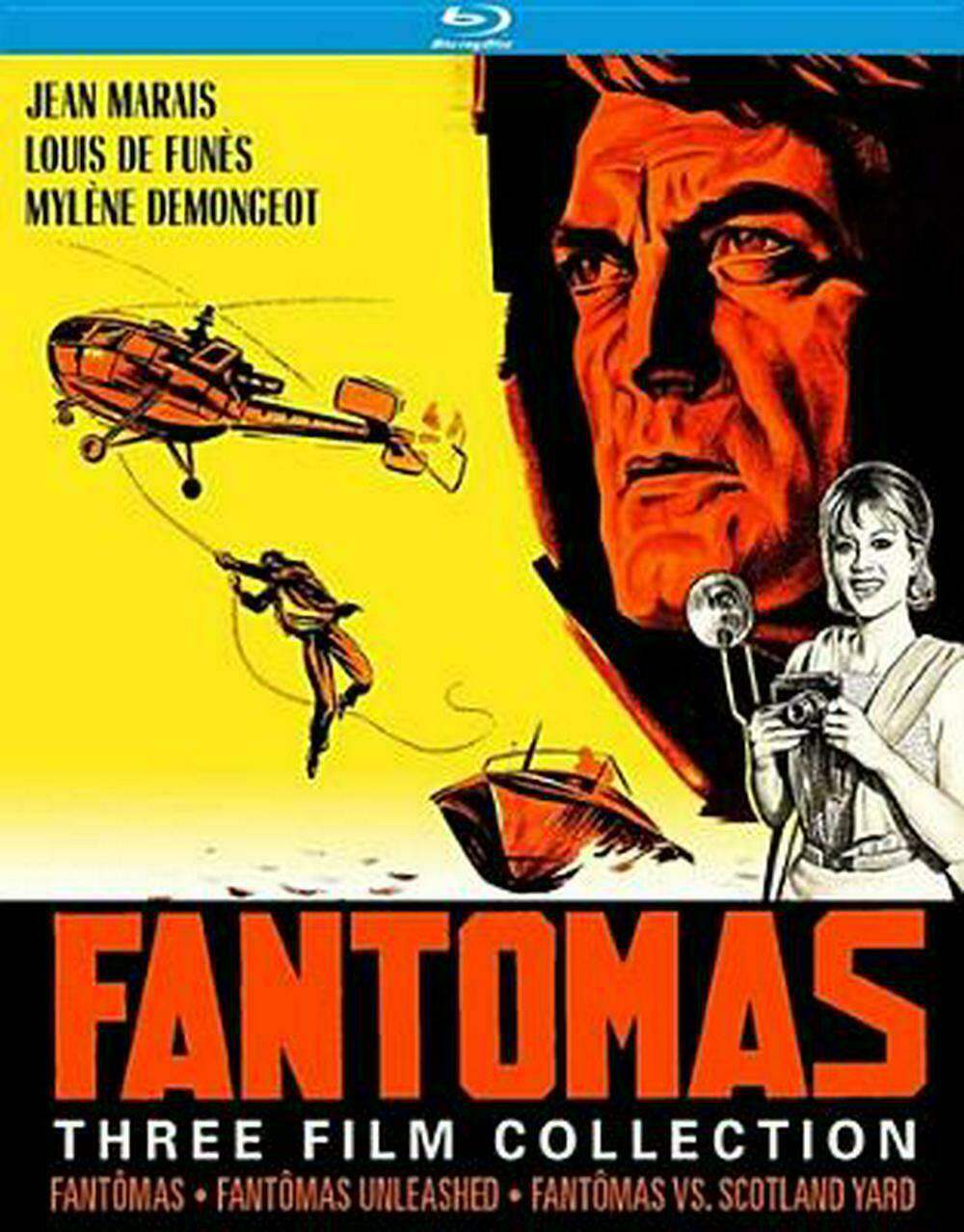 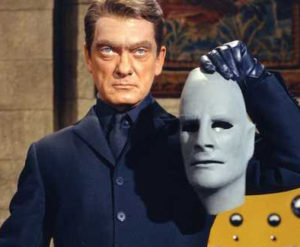 Eighteen years after playing the duel roles of an aristocratic monster and his swashbuckling adversary in Cocteau’s Beauty and the Beast, Jean Marais got the chance for a reprise – this time as a two-fisted reporter named Fandor and his bête noire, the otherworldly antihero Fantômas.

He (they?) were the protagonists of a colorful trio of swinging sixties satires directed by André Hunebelle between 1964 and 1967 – each chapter was the CinemaScope equivalent of a chocolate sorbet and loaded with the same self-amused ironies of the French New Wave and the Batman TV show. 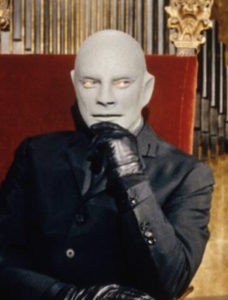 Fantômas even has his own Batcave, plotting his next move from a luxurious underground lair seemingly decorated by Captain Nemo and the Phantom of the Opera. The very definition of a protean figure, this phantom rotates faces and costumes with the greatest of ease, sometimes even during the enactment of his own crimes.

At home the scoundrel relaxes in a black suit and tie, his face concealed by an aquamarine-colored mask with fin-like ears that gives the devious shapeshifter an oddly appropriate amphibian profile – a fishy fellow this Fantômas.

Fandor, with his lantern jaw and boyish forelock, is Norman Rockwell’s notion of an action hero, a Franco-fied Jack Armstrong. One of the few actors who could credibly play both Orpheus and Simon Templar, Marais is featured front and center on the movie’s poster where he dangles from a helicopter while clutching a rope ladder – for once there is truth in advertising, the stealthy actor actually performed these jaw-dropping stunts himself.

Fandor is at the wrong end of that rope thanks to Fantômas, of course – the thin-skinned megalomaniac has taken his revenge against the nosy journalist by impersonating not only the newspaperman but the bumbling police Commissioner Juve in a series of crimes meant to humiliate the duo. 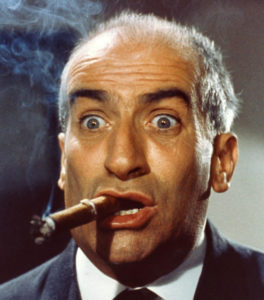 The idiot Juve is played by Louis de Funès – at the time he was regarded as France’s favorite actor so naturally his inept detective gets plenty of screen time throughout the series. Close on his heels was Mylène Demongeot whose presence as Fandor’s impossibly cute girlfriend suggests Bardot in one her frothy comedies but without the baggage.

The movie ends on just the right note for a burgeoning franchise – the forward-thinking villain makes his escape in a submarine as the hapless Juve bangs at the portal, sinking along with the ship. That waterlogged finale would be repeated at the beginning of the film’s sequel – this time in cartoon form ala The Pink Panther. 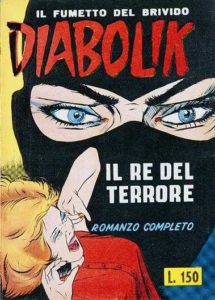 Released in 1965, Fantômas se déchaîne (Fantomas Unleashed) exemplifies the stranglehold comic culture had on the entertainment of the era – a grip made tighter by the flurry of adult-themed comics spilling out of Europe in the early 60s. Engineered by the likes of Crepax (Valentina), Jean-Claude Forest (Barbarella) and Angela and Luciana Giussani (Diabolik), those comics helped set the stage for the new adventures of Fantômas.

Unleashed highlights De Funès’s presence in a Blake Edwards-like farce that promises Inspector Clouseau but delivers Inspector Gadget. Fandor disguises himself as the famous scientist Lefebvre to lure Fantômas into a trap but only creates confusion when multiple Lefebvres begin sprouting up. Juve steps into the fray with several rickety crime-busting inventions that recall Mad Magazine parodies of Bond’s gadget-happy Q. To everyone’s surprise, including Juve, they get the job done. 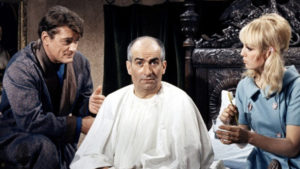 In 1967’s Fantômas contre Scotland Yard, Marais and friends join the Bowery Boys and Abbott and Costello in a rite of passage for so many comedy teams, the haunted house farce – with Fantômas as the featured ghost. The movie places its bets on slapstick seances and sheet clad “spirits” chasing our heroes through the clammy halls of a Scottish Castle like a Monogram picture with a higher pay scale.

Fantômas’ latest scheme is both ambitious and ludicrous – he wants to tax the very wealthy in order to fund his trip to a distant planet. This wobbly storyline is at least given an up-with-people rationale by the formerly apolitical Fantômas who “puts crooks and the privileged in the same bag”. 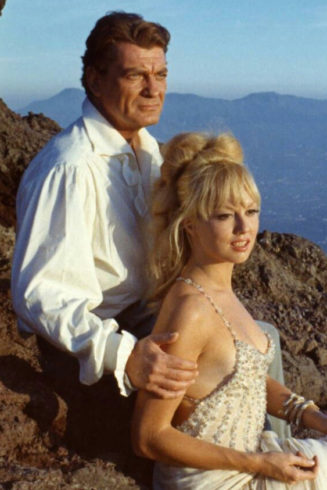 This third and final film in the series seems to run out of gas before our eyes and dawdles just long enough for a distracted audience to dream up alternative world scenarios – what if Cocteau had lived to get a crack at the fantastic supervillain – Fantômas in the Underworld with Demongeot as Eurydice?

Kino Lorber’s set is a fine presentation – the three films are housed on two discs with excellent, though occasionally erratic image quality (Scotland Yard suffers the most, ping-ponging between super sharp clarity and grain storms).

As for the extras there’s a collection of amusing trailers featuring Fantômas as well as the mock-serious spy fighter films, OSS 117.

Tim Lucas drops by with a typically insightful and fact-filled commentary on the films and history of Fantômas  – and is properly impressed by Marais’s unruffled joie de vivre during those high flying stunts.