René Laloux’s marvelous animated Sci-fi tale is still in a class of its own, mainly because its imaginative- creative level is so high. Who would have thought that limited animation could look this good? The designs are by the impressive artist Roland Topor. 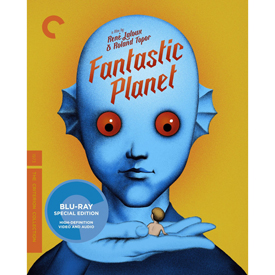 What a fine introduction to an excellent movie. The animated Sci-fi tale Fantastic Planet played frequently in Los Angeles in the middle 1970s, but I avoided it because I didn’t like the limited animation on view in the trailer. That was a mistake. A powerful experience now, the movie must have been mind-blowing back then. It’s a labor of love by René Laloux, who got interested in animation while working in an asylum; his first movie was actually made with an art class he organized for the people he was caring for. Laloux directed some arresting, disturbing short films with writer and fine artist Roland Topor. Their Les escargots was sufficiently exciting (and inexpensive) to attract a producer for a full-length feature. The fine animation for Fantastic Planet was accomplished in studios in Prague. The minimalist animation is not a drawback but a benefit – the show has a unique style.

The story takes place on the planet Ygam, ruled by enormous blue humanoids called Draags. This cultured race lead cerebral, calm and orderly lives. They unleash their passions during meditation, when their globular avatars play, create and make love. Also on the planet are Oms, tiny humans that were brought there long ago. Many Draags and their children keep Oms as playthings, but enough have escaped to form primitive colonies and encampments. The Draags don’t recognize Om intelligence. They imprison and sometimes abuse their pets by making them fight, and consider the free-range population a nuisance. Infested areas are periodically ‘De-Omed.’ A Draag child named Tiwa allows her boy Om pet Terr to share an automatic learning device, with which he picks up the language and learns many of the Draags’ technical secrets. Terr eventually escapes. A wild Om frees him from his capture collar, and he joins a colony encampment. Besides having to deal with competing tribes, they endure a De-Om that results in a Draag being killed. The Om tribe prepares spaceships to flee to a nearby moon, as the Draags unleash a major offensive to rid themselves of the Oms forever. 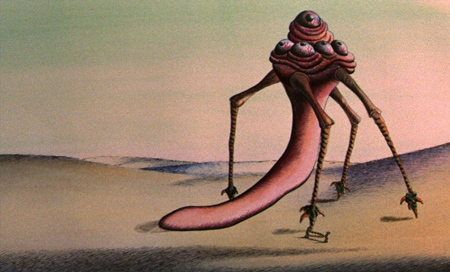 The delightful Fantastic Planet keeps our interest high throughout. Every scene delivers interesting ideas and original designs; Roland Topor’s notions of fantastic alien flora and fauna are simply terrific. He’s like H.R. Giger with a wider range of expression. The landscapes are alive with ever-more weird creatures to threaten the Oms. Topor’s drawing style is arresting in itself. The serene Draag faces look like classical sculptures given blood-red eyes and Gill Man ears. The Oms are desperate little savages living on the edge of extinction. Even the landscapes are unique — one desert appears to be made of intestines. When Terra’s new tribe forces him to fight another Om, their arms are tied and they’re strapped to worm-things with shark-like mouths.

Young Terr’s survival story is also a grabber. Tiwa adopts him as a baby when his mother is killed, forcing him to live a bizarre existence as a human toy. When he joins his own kind, he soon becomes a valued citizen for his ability to read Draag and his knowledge of Draag science. Eventually moving into an abandoned rocket plant, the Om attain technical equivalency with the Draags and are able to formulate at least some defenses against them. 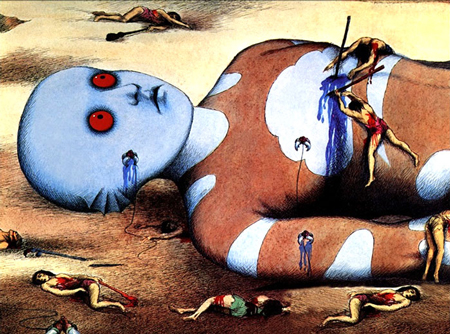 The story invites interpretation. The name ‘Om’ is identical to ‘homme,’ the French word for Man. The species-centric Draags treat the Oms as cute little creatures and underestimate their capabilities. This corresponds well to our notion of holding dominion over nature, and denying the rights even of animals that demonstrate intelligence. Substitute other races for animals and there’s a cogent parallel to be made — the little pet Oms are held in captivity like slaves. The methodical extermination machines bring to mind parallels with Earthly genocides. The final chapter sees the Oms winning recognition from their former captors, but they must use terror violence of their own to achieve it.

There’s also the notion of relative savagery. The Om tribe is a practical group fighting other tribes and raiding Draag stores for supplies; they’re held back only by a shaman who recognizes the threat of Terr’s science to his authority. The Oms perform a communal mating ritual in which they go through a process that makes them glow, and then pair off in the dark. The Draags fly in their meditation globes to a forbidden moon, link up with giant headless statuary, and use those ‘bodies’ for their carnal pleasure. These out-of-body experiences seem to be the adult Draags’ main form of recreation. 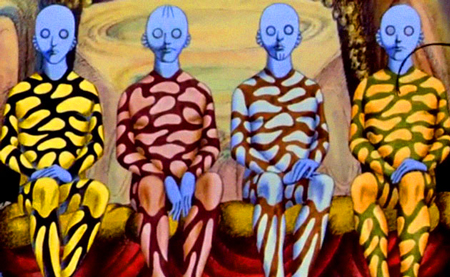 Everything we see has that kind of imagination in force — it’s not a biologically consistent world but the alien designs stir the imagination. Even when the action is static, the flat-artwork backgrounds are fascinating to study. Helping enormously is a highly creative and lively music score by Alain Goraguer. Partly electronic, it’s more sophisticated and expressive than other futuristic scores I was hearing at the time. Along with the beautiful French voices for the characters, the music gives the film its flow and narrative direction.

The Criterion Collection’s Blu-ray of Fantastic Planet is a picture perfect encoding of this impressive show, with the artwork richly represented so that we can see every ink line and coordinated texture. Laloux’s films use cutout characters, some jointed and others floating animations, so there are no reflections from animation cels. Camera movement provides some action but it’s really the design and the creative angles that bring it to life. As a kid I didn’t like the limited animation in the Japanese cartoons offered on Television. But Fantastic Planet struck me as fine art.

The audio is rich and vibrant. An alternate English-language soundtrack is provided for those who rebel at reading subtitles.

Criterion’s extras offer a thorough look at the filmmakers. We see two of René Laloux’s earlier animations, with art and stories by Roland Topor. Les temps morts (1965) is a surreal, sardonic look at humanity’s capacity for violence, murder and war; it’s stylized-sadistic and all too insightful. Filmed in 35mm and beautifully restored, Les escargots (1966) is a clever story pitting a frustrated scientist against various natural forces, concluding with an invasion of giant man-eating snails. 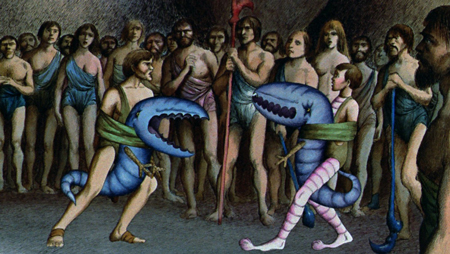 Laloux sauvage is a delightful 2009 documentary on René Laloux, explained by Laloux himself, in a jolly confessional tone punctuated by hearty laughter. Laloux’s political comments are priceless, as when he openly admits that he ran off to Czechoslovakia for the animation work because ‘the slaves were cheaper there.’ He laughs as he explains the absurdities of the Communist government, and how the show was held up for years when the Russians invaded and work had to be suspended. A 1974 episode of the French television program Italiques about Topor’s work is about an hour long; various artists, actors and Topor himself fill us in on his many creative activities, many quite involved and some done just for their own sense of absurdity.

A separate short interview with Topor hails from 1973. We also get that trailer that didn’t thrill me in 1974. The insert essay by Michael Brooke sketches the interesting production circumstances and places the movie in context with other fantasies of its time; I hadn’t realized that this movie and Planet of the Apes came from rather isolated French Sci-fi books, both satirical in form. On the flip side of Moore’s essay is a good-sized poster of a scene from the film.