Writer-director Sergio Sollima gives us one of the best ‘political’ Italo westerns from the pre- May ’68 era… with two top stars in great form, Gian Maria Volontè and Tomas Milian. This two-disc German import has both the long and short versions of the movie in HD, with full language options for each. 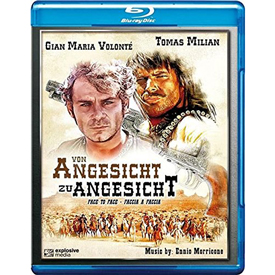 Italian westerns hit the U.S. big in 1967-68, and thanks to their deal with producer Alberto Grimaldi, United Artists raked in all the cash from the Leone-Eastwood pictures, topping off the coffers already overflowing with Beatles money, James Bond money, etc. Spanish-made Italian westerns flooded the market as Italo sword ‘n’ sandal pictures never had. Ennio Morricone’s music was suddenly popular on the Top 40 stations, even if only in cover versions by Hugo Montenegro. 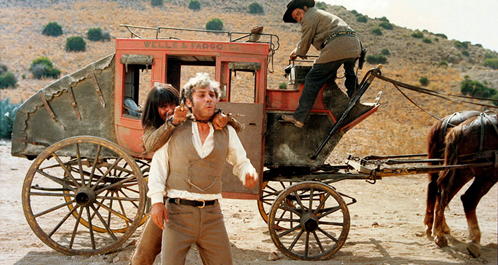 The center of excitement here was Clint Eastwood, so much so that the ersatz Italo picture Hang ’em High did almost as well as the classic Sergio Leones – it also spawned a radio hit. But only a few other Italo items that received a strong release where I lived. The Big Gundown and Death Rides a Horse were probably big in Los Angeles, but we in the stix got less than stellar titles like El Condor and Captain Apache. During the early ’70s when genre studies were booming, American studies ignored most Italo genre product, while the English critics I read were more into auteur classics and wanted nothing to do with the ragged Italian genre. I experienced that too. The dubbed voices and awful sound effects (those gunshots) on the import versions could be very shoddy.

Many fans feel that there are only quality pictures by Sergio Leone, and a pack of undistinguished pretenders. They have a point. The various movies with Lee Van Cleef try to capture the ‘Dollars’ spirit, but haven’t Leone’s spark of genre experimentation. I have to say that I now watch The Big Gundown partly and Navajo Joe mostly to enjoy how the Morricone music works with the images.

That’s why it is exciting to run into Sergio Sollima’s excellent Face to Face, made as Faccia a faccia in Italy and presented here on the German label Explosive Media with the title Von Angesicht zu Angesicht. Just like The Big Gundown, it lost twenty minutes on export to the UK, and was reportedly not even imported to the United States until 1976. Why? I would guess that this is because the big European stars Gian Maria Volontè and Tomas Milian meant little or nothing here.

We read a lot about politically ‘committed’ Italo westerns, and Face to Face is the first one I’ve seen that works on a sophisticated level. Like the country itself, the Italian film industry was polarized to left and right political extremes, but for the most part managed to live in harmony. When videotaping video extras for the Leone pictures in 2003, I got to ask interviewee Mickey Knox to elaborate on his statement that Leone was a commercial filmmaker, not a ‘committed’ one like, say Francesco Rosi. The feisty and opinionated actor, dialogue coach and English version director had strong political opinions of his own, and he respected stars like Gian Maria Volontè who were committed to socially progressive work. Volontè stated often that movies without an overt political dimension simply endorsed the existing power structure. He reportedly turned down an offer to play a major role in a James Bond film. 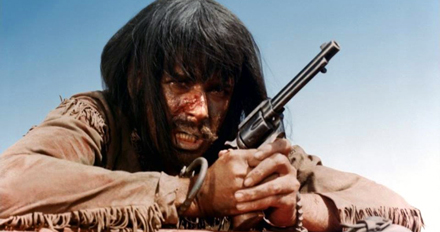 The ‘political’ content I’ve seen in other Italo westerns usually boils down to gunmen helping innocent peasants battle evil politicians or capitalists, who aren’t all that different from the ‘evil dictators’ that must be put down in sword ‘n’ sandal epics. The screenplay by Sergio Sollima and co-writer Sergio Donati skillfully steers the western format for a conflict between characters with varying approaches toward outlawry. Suffering from TB-like symptoms, Eastern college Professor Bradley Fletcher (Volontè) is recuperating in the hot dry region of Texas, when he becomes a hostage of convicted murderer and bandit Beau Bennet (Tomas Milian). Brad takes care of Beau while a gunshot wound heals. Intrigued by the criminal lifestyle and living by one’s wits, Brad eventually joins Beau’s gang of thieves. Also joining them is Chas Siringo (William Berger), a crook who shoots a sheriff to prove that he’s not a police spy. Brad learns the way of the outlaws and even takes a woman (Jolanda Modio) for his own by fighting another man for her. The fiercely loyal Beau wants to break a loyal gang member out of jail, but Brad has other ideas. He convinces to take on a highly ambitious bank robbery that promises a fabulous payday, not just a few thousand dollars. But neither Brad nor Beau knows that the police have an informer in their midst, whose job is to lead them into a trap.

Face to Face is constructed with standard western elements, but politically it seems to be reaching for a revolutionary consciousness. The ‘natural bandit’ Beau doesn’t think far ahead, and is mostly concerned with survival in the moment and being true to his comrades. He directs his knife and gun only at the law, and against turncoats. When a little kid is killed during a holdup, Beau is seriously broken up about it. The intellectual Brad looks beyond Beau’s simple smash & grab thievery to imagine more organized criminal strategies. He’s willing to be just as ruthless, but he wants to plan things. The suggestion is that Brad is a proto- revolutionary who wants to overturn authority and set up something better; but for the moment he behave just as would a gangster of the next century, concocting smarter crimes. The Pinkerton agents in the pay of the railroads and banks are quick to realize the threat. Ordinary thieves are jailed, but revolutionaries sticking it to the moneymen can expect much worse treatment. Brad operates from an outlaw hideout called Puerto del Fuego (‘Hell’s Gate’). The bankers hire a thug (perennial Leone thug Aldo Sambrell) to round up a massive posse. As in the much later Heaven’s Gate, a bounty will be paid for the killing of every person in Puerto del Fuego, including women and children. Brad and Beau find themselves trying to defend dozens of innocents against murderous private interests.

A common problem with Italo westerns is that the violence is treated as generic filler, and is often repetitive and overdone. A story can stand just so much nasty double-crossing and egregious cruelty before it becomes dull, as seen in otherwise well-made pictures like Navajo Joe. Sollima’s Face to Face is actually sparing with its action scenes. Each makes a special impact — the partnership of Brad and Beau is based on something more than convenience. Cynical treachery isn’t the only point of interest.

What this means story wise is that Face to Face is less predictable than most Italo westerns. When the final showdown arrives, it’s worked out in a very interesting and satisfying way. The conflicts are not resolved with a radical-chic message statement.

Gian Maria Volontè gives everything he has to his role, as usual, taking the character entirely seriously; he starts out wearing pale-faced ‘sickly’ makeup that makes him look like an apprentice zombie. As a representative from academia, the Professor’s conversion to banditry earns our keen attention. The Brad reiterates the old Monsieur Verdoux argument, that independent criminality is okay because companies and governments commit the same crimes on a mass scale. That evasive rationalization has never had a ghost of a moral foundation.

Cuban-born American actor Tomas Milian is the surprise here. Moreso than his character Cuchillo in The Big Gundown, this Beau Bennet actually is a desperate criminal trying to suss out a workable moral code, who makes very good decisions based on instinct. Beau appreciates the logical strategies of the initially meek Professor, but the fact is that neither of them have a defense against spies and agents provocateur: most of their followers fall victim to a massacre. Milian works under an unusual handicap, an overdone, very fake longhair wig that makes him look like Peter Sellers in What’s New Pussycat? How the hell does Beau keep his hair clean? 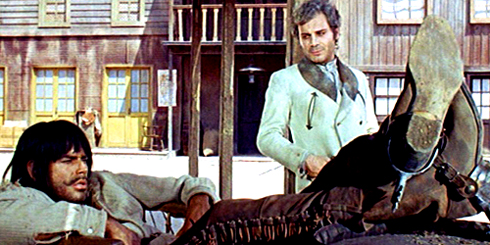 I suppose a modern analysis of Face to Face would find the Italian screenwriters woefully deficient in the sexism department: part of Brad’s education in banditry seems to be to learn how to mistreat a woman. Of course, these outlaw dames show incredible loyalty to their men, no matter how they’re treated.

Armed with this superior screenplay, Sergio Sollima seems more focused than ever. The movie follows its own path, not trying to ape Sergio Leone situations, or out-kill the Django movies. Sollima uses the zoom lens much less this time out. Even though his pictures aren’t visually distinguished, he and his cameraman Rafael Pacheco do find some excellent compositions. And the costumes and sets have that higher-quality Carlo Simi attention to detail — lots of rich reddish woodwork. I skipped this on DVD several years ago but I really enjoyed this Blu-ray.

Explosive Media’s Region A+B Blu-ray of Face to Face (Faccia a faccia) is yet another one of their first-rank Italo western presentations. Explosive Media’s top-liner Ulrich Bruckner is devoted to the genre, and has made certain that the fans will be happy, as the were with his terrific multi-language disc of The Big Gundown several years back.

As Explosive’s primary market is Germany, the package title is Von Angesicht zu Angesicht, although the long version that I saw uses the English language title. Color and picture quality throughout are excellent. Of special note is the Ennio Morricone score, a jarring guitar theme that’s less operatic than we expect, but quite effective. Morricone’s mood and transition cues give the show a genuine boost.

Although the German Amazon listing says that a DVD is included, Explosive’s release is a double Blu-ray set. Face to Face presents two versions on separate discs, the 93-minute English theatrical version and the original 112-minute full version, which is what I watched. Some sections in the uncut version have been up-scaled from Standard Def. But both versions have a full English track.

Why go for the German disc? According to Bluray.com the American Lorber disc only has the Cut version in HD, and only in English. It has the Uncut Italian version, but only in Standard Def. Although listed as Region B, the disc plays in Region A machines as well.

The short version disc contains a trailer, a photo gallery and a transfer of a Super-8 digest version (the Germans seem to like to include those). An eight-page illustrated pamphlet carries an essay in German by Markus Tschiedert.