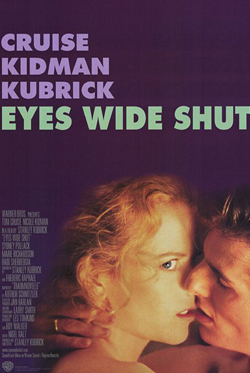 This dream-like treatise on sexual politics was Stanley Kubrick’s final film (he died just days after previewing his final cut).  Perplexed audiences are still arguing about this one, but it nonetheless exerts the usual hypnotic Kubrickian aura. The elaborate production features a not-quite-real recreation of Greenwich Village at Pinewood’s UK studios, further intensifying the distancing factor. Tom Cruise and the dazzling Nicole Kidman, whose real-life marriage was on the brink of crumbling, play a high-toned couple whose marriage is on the brink of crumbling.  For US release the studio trimmed and digitally obscured some of the movie’s ceremonial orgy scenes once Kubrick was unavailable to object.