Those scurrilous Italian ‘mondo’ films are difficult to see in original versions; this Something Weird double bill yields an American hybrid of one of the better (?) examples, given the classy touch of a narration by George Sanders. A second oversexed pseudo-docu is a homegrown mongrel (careful, don’t touch) with all the credibility of today’s Reality TV — it doesn’t even try to be legit. Once again, Severin comes through with a doubly guilty pleasure, for sex-starved carnival suckers everywhere. 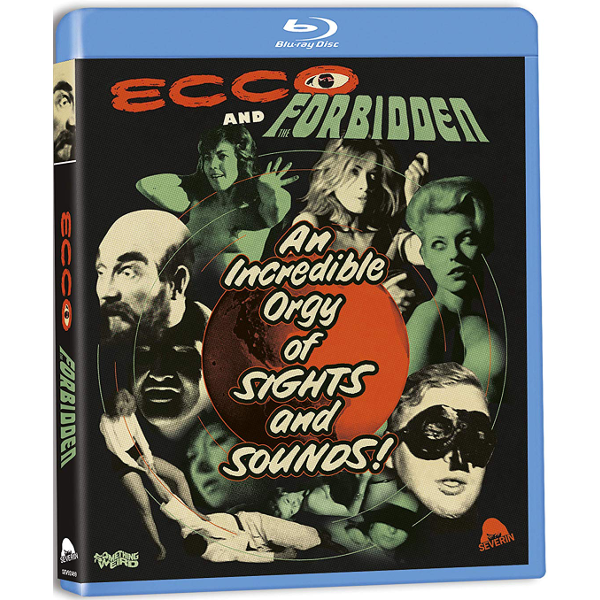 Severin Films has released two Something Weird ‘Mondo’ double bills on Blu-ray, that came out on DVD thirteen years ago on the Image label. One of the few genres of exploitation film that still receives little or no serious criticism is an infestation series of opportunistic faux- documentaries borne from the massive success of 1962’s Mondo Cane. These pictures do have a current relevance: their legacy is felt in the faked narratives of Reality TV and in sordid content available on the internet.

We’re happy to report that at least one sub-genre of exploitation filmmaking was not invented in America: the sensationalistic pseudo-documentary Mondo movies originated directly from Italy. Continental film fare became more sexually explicit when producers realized that product purporting to expose social problems had a better chance of slipping raw themes and nudity past the censors. German producers, for instance, claimed that their films educated the public on the important subjects of prostitution and drug crimes. This allowed them to flood movie screens with sordid melodramas offering otherwise forbidden content.

The Italian producer Gualtiero Jacopetti took the equation one step further with the sensationally successful Mondo Cane (1962), which uses a cynical narration to unite a series of unrelated docu episodes filmed around the globe. The theme is that the world isn’t fit for dogs, a notion illustrated by things as innocuous as bizarre menu choices served in exotic Eastern restaurants. A condescending, xenophobic narration tells us that what we’re seeing is disgusting. The claim of moral journalism gave Jacopetti latitude to show questionable content such as native nudity and primitive rites. Better yet, with no stars and no set story to tell, the film was relatively cheap to make. Part of its popularity came from the radio success of its beautiful theme song Ti guarderò nel cuore (More) by Riz Ortolani and Nino Oliviero.

Mondo Cane’s most controversial sequence shows a sea turtle lost and dying in the hot sands of a Pacific atoll. We’re told that the animal is unable to find its way back to the sea because atomic radiation has scrambled its natural compass. Did the filmmakers simply torture a turtle and watch it die?  The traumatic (and quite possibly phony) sequence raises a number of still-debated questions about media ethics:  Do news people have a moral obligation to intervene in their subjects, or are they professionally obliged to remain aloof?  The movie’s credibility was debated in Haskell Wexler’s 1969 political film Medium Cool.

Mondo Cane spawned dozens of copycat productions purporting to bring the world’s shocking and scandalous secrets to neighborhood screens. The films frequently misrepresented existing docu footage and cheated by claiming that hidden cameras had captured events that are obviously staged. This double feature disc gives us two Mondo titles on the quality downgrade, the fairly well-known Ecco and the obscure American imitation Mondo The Forbidden. 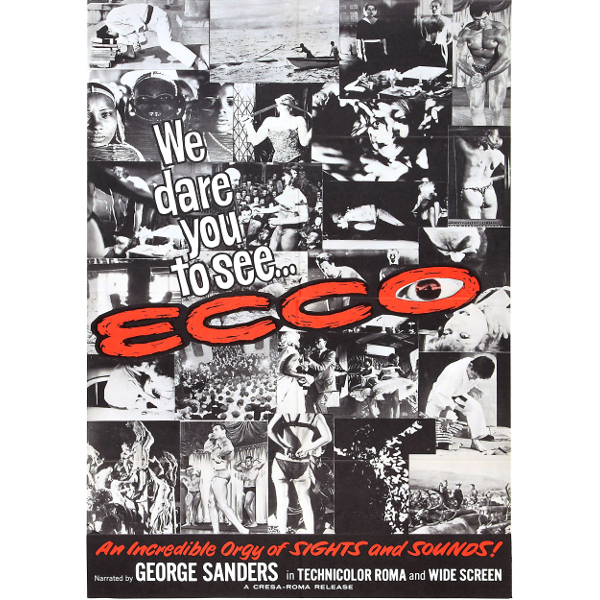 Ecco retains many of the production qualities of the previous year’s Mondo Cane, including another dramatic music score from Riz Ortolani. Relatively classy (but bored-sounding) English narration by actor George Sanders helped to earn Ecco a wide American release. The Italian word ecco means ‘look here,’ or ‘behold;’ Sanders’ bemused voice lends credibility to the film’s stated aim of showing us the extremes of behavior that make up the human race. Filmed in color and widescreen, this is not the original Italian cut Mondo di notte numero 3, but a hybrid re-edited by R.L. Frost and R.W. Cresse, reportedly replacing much footage with scenes from another shock travelogue feature, 1961’s Il mondo di notte numero 2.

Ecco features a couple of intriguing subjects among a long list of phony, staged events. The most impressive takes place in Japan, where a ritual festival called Saidachi involves hundreds of loin-clothed men rushing from freezing water to jam into an open-air pagoda and struggle for possession of a piece of paper. The crush of men is truly eye-opening. Ecco’s complete lack of contextual information undercuts any understanding of what we’re seeing. Are the Japanese men college students, and is Saidachi the equivalent of a fraternity rite?  Considering the level of dishonesty in the narration, we don’t know what to believe. 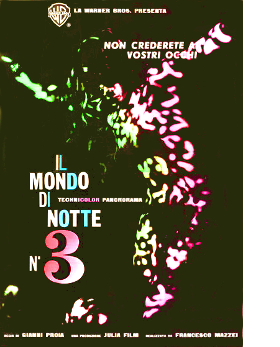 A demonstration in Lapland of a traditionally garbed maiden castrating an adult reindeer with her teeth is equally baffling. We cannot tell if the reindeer ritual is still being done this way or if we’re seeing some wild stunt; the rest of the Lapp footage shows several photogenic couples pairing off in staged make-out sessions amid the beautiful northern scenery. The savagery of the castration ritual fires their passions, Sanders tells us.

The English narration written by the notorious exploitation producer Bob Cresse simply lines up prejudiced and racist statements for Sanders to read in his bored tones. The Lapps are sex-obsessed Scandinavians and the Japanese segment can’t be finished without a reference to treachery at Pearl Harbor. Another segment showing the activities of a German dueling society assures us that the young fencers are overjoyed to be given disfiguring facial scars; the Prussian dueling tradition is then equated with Nazi tendencies. A staged dirty party game in a ‘private club’ shows some inebriated Frenchmen (including actor Michel Simon) voting on a procession of nude derrières. The Frenchmen are decadent, and housewives gawking at an exhibition of musclemen are sexually frustrated … the list of generalized insults goes on.

Mondo Cane’s mostly tamer travelogue content at least seemed authentic, but Cresse and Frost realized what Reality TV producers now take as a credo: truth or integrity is secondary where low-common denominator entertainment is concerned. As with Mondo Cane, Ecco often pairs up subjects to imply an ironic contrast. For instance, a fancy Parisian debutante ball is juxtaposed with a (staged?) drunken bacchanal on the banks of the Seine. Several items in the ‘travelogue of sensation’ are simply various kinds of striptease acts.

The notion that the Mondo movies are the cinematic equivalent of a carny sideshow is borne out by a sequence featuring a ‘psychic wizard’ who proves to be a geek-like professional body piercer. A karate exhibition was surely more exotic in 1963 than it is now. The ‘last performance’ of the Parisian Theater of the Grand Guignol offers only a glimpse of action on the stage, but does show the theater’s famous interior with its carved wooden angels.

Director Gianni Proia ends his show with a phony contrast of the sacred and the profane. A patently faked English Black Mass, supposedly filmed secretly ‘through a window,’ ends with a shower of chicken blood splattered onto a reclining nude, dramatically lit for the camera. Then we’re shown an unconvincingly staged sequence in which a devout Italian bride climbs a long stone church stairway on her knees. The ritual is said to have the power to enhance fertility, but the visuals make for a limp conclusion. It takes Riz Ortolani’s rising music and George Sanders’ patronizing narration to let us know that the movie has ended. 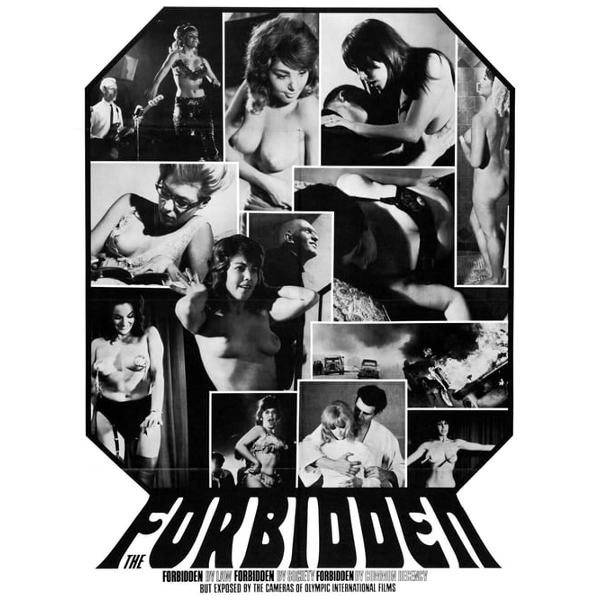 Something Weird always included a lesser-quality item on the lower half of a home video double bill. We hit the lower depths of Mondo moviemaking with R. Lee Frost and Bob Cresse’s The Forbidden, a mind-numbing exercise in tastelessness that appears to have been created by appending new color scenes to some existing European material. A relentless narration lectures on society and morals while the amateur images never rise above peepshow prurience. Most of the material is about women stripping, while the obnoxious voiceover claims a Redeeming Social Message. The show literally looks like discarded fragments crudely joined with the agonizingly bad narration.

An extended opening scene of two topless women fretting over a possible rapist (they simply open the door for him) eventually pretends to be an ad for a self-defense karate school. Most of the other sequences ‘filmed all over the world’ involve strippers: Nazi strippers, virgin strippers, etc. Everything about the film is faked. The same faces pop up in a Hollywood club and a supposed Swiss hangout for lesbians. A few shots of abandoned junk in the desert are offered as proof of the existence of a mobile topless bar that follows workers from job site to job site.

In between shaky shots of the Los Angeles skyline, a B&W fragment filmed in France depicts a ‘shocking murder story’ about a woman who kills her young friends so that she can see the man she loves when he returns to attend the funerals. It appears to be a failed short subject incorporated into The Forbidden to pad out the running time.

The film’s overall crudity makes Ecco seem accomplished by comparison. This trashy ’60s picture could only have played in a grind-house fleapit, possibly to clear the house. Frost and Cresse were also behind the Mondo concoctions Mondo Bizarro and Mondo Freudo, which are being offered in a second double bill. When hardcore pornography was finally deemed acceptable in the late 1960s, the Mondo movies were replaced by phony sex documentaries. 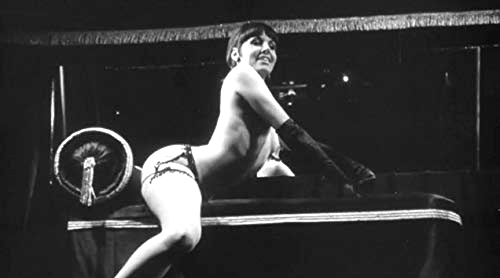 Severin Films/Something Weird’s Blu-ray of Ecco + The Forbidden is SW’s usual mixed bag of undeniably one-of-a-kind artifacts liberated from material abandoned in old film labs. Ecco is a big improvement on the old DVD, which was flat-letterboxed. The color is still weak but the image is much sharper. Some original prints were reportedly made by Technicolor. The ‘Panoramica’ image appears to be a variant of Techniscope — the half-frame format that yields 2.35:1 images without anamorphic lenses. Apparently sourced from a single surviving print, The Forbidden on Blu-ray can still be called an improvement on the DVD for image quality. The B&W segments look fairly good but the color scenes have almost completely faded.

In addition to a rather sophisticated trailer for Ecco, two extras appear. The short film I Want More looks like unfinished outtakes from The Forbidden for attempt at a Los-Angeles-based Mondo variant, with mind-numbing segments interspersed between footage of an inept host speaking from the top of a building. The Bandit is a Severin- produced interview with exploitation producer Bob Cresse’s associate David Goldstein, who relates some unexpurgated anecdotes (and perhaps tall tales) about Cresse without really explaining much about him, except that he was plenty weird. We see clips from Cresse’s film Love Camp 7 and other movies in which he acted, including The House on Bare Mountain, where he plays a comic ‘Granny Good’ in drag.