In the 1980s, bored film critics sometimes claimed to see homoerotic themes in any ‘buddy picture’ about guys being friends with guys. Only one bold comedy dared to confront this notion directly — in this show, Dennis Quaid spends a full two hours inside Martin Short, yet the finished picture is still perfectly suitable for all audiences and age groups! 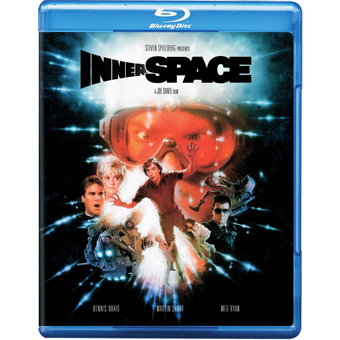 Warner Home Video shows some class with this Blu-ray revisit of a genuine 1980s audience-pleaser, the sci-fi comedy Innerspace. It’s one of the best achievements from the cinematic toy box of Joe Dante, the Roger Corman acolyte who graduated to direct some of the most entertaining fantasy pictures of the last thirty years. Savant’s been a Dante booster since his innovative scary-funny The Howling ripped up screens way back when. (note: as DVD Savant is at present being guest-hosted by Dante’s site Trailers From Hell, I figured I’d get all the shameful conflict-of-interest talk over right up front.) 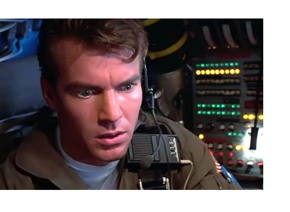 Innerspace concentrates fantasy films, science fiction, and Warner cartoons into a new comedic form. It’s also a triumphant showcase of conventional optical special effects, just before the computers took over. In the disc’s entertaining and informative commentary track, Joe Dante describes his movie as being like a Jerry Lewis – Dean Martin comedy, if you shrunk Dino to the size of a germ and injected him into Jerry’s bloodstream. The main difference is, this is funnier than any Martin-Lewis picture. Frank Tashlin would be proud.

One big surprise is that on one level Innerspace plays like an old-fashioned ’30s screwball romance, with meet-cute scenes, witty dialogue and romantic relationships that depend on the charm of star personalities. Chip Proser and Jeffrey Boam’s screenplay comes up with some genuine star-making material. Troublemaking ex- astronaut Tuck Pendleton (Dennis Quaid) is the volunteer for an incredible, unbelievable, pretty-darn important experiment. Along with a mini-submarine, he’s to be miniaturized and injected into the bloodstream of a lab rabbit. Unfortunately, when treacherous spies intervene, Tuck is hypo’ed into the reluctant rear of hypochondriac supermarket cashier Jack Putter (Martin Short). Tuck initiates communications with Jack from inside, which Jack hears as disembodied voices and concludes that he’s going crazy. With the spies in hot pursuit, Tuck must talk Jack into becoming a sci-fi secret agent, to set things right and get Tuck out in time to be reunited with his fiancée, Lydia Maxwell (Meg Ryan). 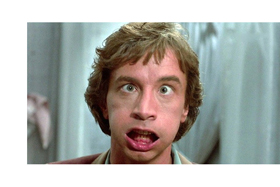 The concept might not sound very promising at first: Richard Fleischer’s Fantastic Voyage (1966) was a glossy, thoroughly-hyped Fox spectacle that all of us Junior High School kids thought was sophisticated until we grew up and saw it again. When filmmakers revisit old material like this, it’s frequently in the form of clunky remakes that miss the whole point of the original, like 1988’s The Blob, or 1985’s Invaders from Mars. At their worst, they can hopelessly befoul what were originally wonderful movies, as with 2002’s The Time Machine). Innerspace takes its incredible shrinking concept beyond new horizons.

Dante, Boam & Proser reinvent Fantastic Voyage as a wacky chase comedy. Dennis Quaid spends about nine-tenths of the film all by himself in the tiny submarine, floating inside the perfectly chosen Martin Short. Never was a comedian given a better showcase. The bizarre things that happen to Jack Putter permit Short to retain audience allegiance no matter how silly he behaves. Jack Putter is a put-upon everyman, a neurotic schlemiel who’s helpless in a crunch and hopeless with the women in his life, namely his co-worker Wendy (the amusing Wendy Schaal). If the fantasy concept weren’t so strong, you’d think the whole show was an excuse for Short’s comedy bits, like the ridiculous dance he does in one scene. It should come off as gratuitous mugging, but it doesn’t, due to Short’s innate charm and lack of pretension. This is indeed a Jerry Lewis role, but done well. 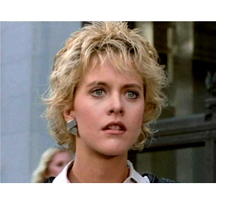 Joe Dante excels at investing old stories with a quirky eccentricity, as in The ‘Burbs. He can also make gleeful cynicism feel liberating (Gremlins) and is one of few filmmakers in the ’80s to get seriously sentimental with teenage characters, in Explorers and the later Matinee. Here he’s got adults that behave like children. Tuck Pendleton’s apartment with its robots and Warner cartoon toys is a little odd, but the fresh smile of his girlfriend, charmer Meg Ryan, tides us over. We’re told that this was Meg Ryan’s first big leading movie role: I believe this is where actors Ryan and Quaid got together as a couple.

Dante’s storytelling skills get a workout once Tuck is inside Jack. Tuck expects to be tooling around inside the bloodstream of a rabbit, according to the hilarious road map graphic on his control panel. Every part of their symbiotic relationship has to be explained: Tuck taps into Putter’s inner ear to be able to hear what Jack hears, and finds he can talk to him as well. This results in a good gag where Jack thinks he’s possessed, only to have patient doctor William Schallert assure him that infernal demons talk through the people they possess, not to them. When Tuck clamps a video receiver onto the optic nerve, Jack’s pantomimed reaction is so good that we wince with pain as well. 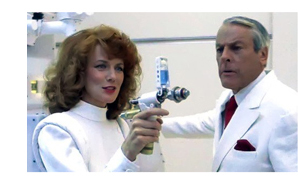 The spy chase nonsense is mined for every bit of comedy potential. Hypodermic-wielding Kevin McCarthy and Fiona Lewis are a loony pair of mad doctors, aided by stoic Vernon Wells and Mid-Eastern ‘cowboy’ Robert Picardo. Nobody assembles a fun cast as well as Joe Dante. From the bit parts forward he miixes people from his favorite old monster movies with the more contemporary faces in his stock company: Dick Miller, Orson Bean, Archie Hahn, Henry Gibson, Kenneth Tobey, the late, wonderful Kathleen Freeman, Joe Flaherty and Andrea Martin. Frequent Dante DP John Hora does very well with the straight-man role of a scientist. Robert Picardo is of course a standout, making an unpromising-sounding character into a riot. In one gratuitous yet very successful gag, some excuse is made to make Jack look just like Picardo’s cowboy character. For a few minutes, Picardo is playing Martin Short role. The screwball antics remain at a high pitch. 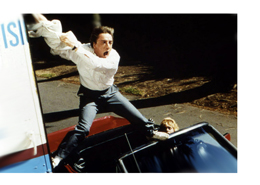 Clever technical inventions augment the fancy optical trickery, as when Martin Short is rigged to stand atop the windshield of a speeding Mustang, while hanging on to the door of a moving van. Or, as Dennis Muren explains it, the interior shots of Short’s blood vessels are allowed to look rough and blurry, like something truly organic. Wonderful tricks are accomplished with forced perspective, or by something as silly as blowing compressed air in the actors’ faces.

Innerspace is a tad bit long for a comedy, but it’s so tightly packed with incident that to shorten it something major would have to go. I’m glad they didn’t — Dante’s Small Soldiers shows signs of compromise both in content and cutting, which doesn’t augur well for his special kind of moviemaking. I envy audiences that saw Innerspace theatrically. Everybody loves this movie.

The Warner Home Video Blu-ray of Innerspace is a solid encoding of this still-funny sci-fi adventure. Getting a big boost are the special effects from ILM, which in 1987 was the go-to place for most everything experimental in special movie visuals. The effects for the interior of the body still look terrific, rich with detail, even in dark shots. The soundtrack is particularly well mixed, with all of the director’s favorite Looney Tunes sound effects brightly billboarded.

The disc’s commentary is one of the all-time best, a dream sit-down with smart and funny people that make us feel welcome in their company. Dante guides the discussion with producer Michael Finnell. Actor Kevin McCarthy is on hand, Robert Picardo drops in, and Martin Short gets ribbed for stiffing the recording session. It’s a great mix. Finnell and Dante have no problem digging equally into big ideas and details (nobody could think up a better title; Steven Spielberg got involved in the casting) and provide a constant flow of humor. They also point out dozens of in-gags that might slip by, like Dante’s hero Chuck Jones as a supermarket patron, and a Body Snatchers seed pod showing up in villain Kevin McCarthy’s greenhouse-like conference room. 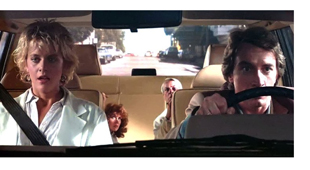 When McCarthy joins in the commentary, he also seems delighted to be there. Picardo arrives along with his Cowboy character onscreen. He’s hilarious when describing the ridiculous costume he wore and the lengths he had to go to make the character work. He even slips in a sly joke about Star Trek: the Next Generation. The straight man of the session is ILM effects whiz Dennis Muren, who starts off as the butt of jokes: “Oh look Dennis – is that another Fat Cell?”   A genuine can-do visionary who officiated over the transition from optical effects to digital, Muren was one of four Oscar winners on the movie. He deadpans his way through a few impressive effects explanations sounding like an ILM corporate spokesman. By the end he’s contributed a lot of valuable information, and dropped a couple of clever remarks of his own.

Innerspace is a fine Dante picture. All of his movies on plain-wrap discs need to be revisited, to add extras and commentaries. We particularly want to learn the whole production story for 1985’s Explorers.